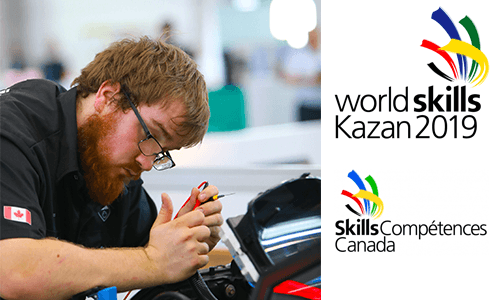 Toronto, Ontario — Oct. 15, 2019 — This past August, young Canadian automotive technician Pascal Doiron took his talents international at WorldSkills 2019 in Kazan, Russia. Less than three years ago, Pascal had never even heard of SkillsCanada. Now, at just 20 years old, he holds a medallion for excellence in automotive technology, which he snagged for his work in Kazan.

Now, back home in Dieppe, New Brunswick and working as a tech for J.P.’s Garage, Pascal raved to Collision Repair about his experience at WorldSkills 2019.

Collision Repair: How did you first become interested in automobile technology?

Pascal Doiron: When I turned 16, my dad bought me an old Toyota Tercel and told me if I could fix it, it was mine. I wanted my own car and I had the opportunity, so that’s what started this all off.

CRM: What was the path to get to WorldSkills 2019?

PD: In 2017, I was attending a New Brunswick community college in Moncton when they asked us if anyone was interested in participating in SkillsCanada. I’d never heard of it, but I figured I’d give it a shot.

I did well in the provincials and went on to nationals. I won nationals that year and surprised myself. The next year, I won again. I didn’t do as well that year, but, because you have to be under 22 at the time of competition, I was one of two age-eligible competitors. Therefore, this year, in April, we had a deciding competition between myself and another competitor and I was chosen to go to WorldSkills 2019.

CRM: Could you tell me more about the competition and competing itself?

PD: The competition itself is split into stations, in my case, because I’m in automobile technology. So I had suspension alignment station, in which case I had to find the fault, correct the fault and then perform an alignment on the vehicle within a certain time limit and following all applicable industry standards.

You had to complete everything rather fast. And sometimes there’s a language barrier between you and your judges. Regardless, you had to show the problem and be able to prove your diagnosis to them, even with that added language barrier.

CRM: What did you learn during the competition that will affect your day to day operations as a technician?

PD: Competing in Kazan taught me how to 100 percent prove an issue you are claiming. Sure, you may be able to say that you are 99 percent sure that something is the problem, but you have to be able to prove your assumptions 100 percent. That’s extremely applicable in the industry, as it can save you a lot of time and frustration from jumping to conclusions and making the wrong call.

CRM: How would you describe the entire experience?

PD: It was amazing. To be able to meet people from all over the world — 63 countries involved. We had 26 competitors in the automotive segment alone. That’s 26 different countries and we all had a chance to meet and interact with each other, which was a really neat experience. We all became really good friends by the end of it all and that’s something I’ll cherish forever.