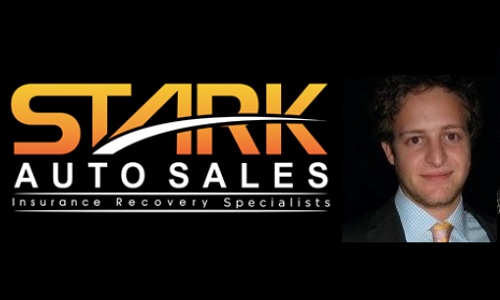 By CRM Staff
Toronto, Ontario — May 29, 2018 — Stark Auto Sales has had a good few decades, something which is made obvious by the fact that the business can afford to operate its head offices in a five hectare (14 acre) facility in midtown Toronto.
Although it began as an auto recycling facility in the 1950s, the business has grown to become the largest Canadian-owned insurance vehicle auction organization, with facilities spread across most of the provinces.
Last week, in an effort to gain some insights about the business strategy behind the success of the family business, CRM sat down with Josh Stark, who is the chief legal officer and, along with his brother Jared, chief operations officer for Stark Auto Sales. Speaking with us, it became very clear that the great secret behind Stark’s success is that the family always makes sure they are realistic about their goals and that they work hard to achieve them.
“I’ve always been someone who has been more of a realist than an idealist, so I’m not sure that my business advice is too exciting,” Josh jokes. “In the next five years, my goal is to focus on steady growth and building relationships with insurers.”
A lawyer who received his degree from Bond University in Australia before articling in Canada, Josh credits his father’s foresight for bringing the family recycling business into a very different, modern direction.
“I am always grateful that my dad insisted that my brother and I get graduate degrees before we played a serious role in the business,” says Josh. “I always knew I wanted to work here, and, had he allowed me to, I might have said yes, but it has been so valuable for us to both to see much more of the world.”
When the brothers did take up their leadership positions, Josh believes that the perspective he gained as a lawyer, and his brother gained studying music management in the U.K., played a vital role in the modernization of the company’s business model.
“It is a bit of a case of old school meets new school. My dad had everything worked out, and the business operated on a handshake system,” says Josh, who admits, “we were able to make things a little more efficient when we formalized.”
A formalized procedure system is not all that the younger Starks have brought to their family business. They are also responsible for a complete renovation of the Toronto facility and for the expansion of the business far beyond Toronto’s borders.
While Josh is proud of all of the success the company has seen in the last few years, he confesses that his ambitions have never been focused on growth, but rather on preservation.
“The business has been in the family for more 60 years, and we now employ more than 30 people. The truth is, I work as hard as I do because I would be too embarrassed to be the one who let things fall apart!”