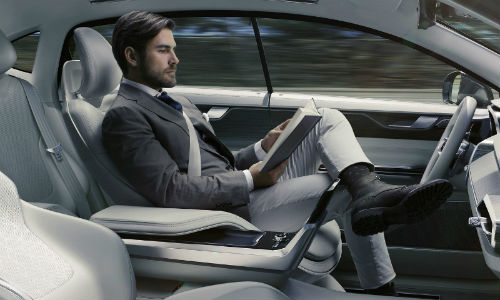 Las Vegas, Nevada — January 4, 2016 — The 2016 Consumer Electronics Show (CES) opened in Las Vegas on January 4, and the first news out of the show removes any possible doubts about whether this show will be of interest to automotive professionals. The news is of particular interest to anyone tracking the emerging technology of self-driving cars. Volvo has revealed that it is developing intelligent, high bandwidth, streaming capabilities with its technology partner, Ericsson, that will ensure drivers and passengers get the most out of their time travelling in an autonomous Volvo.

“We recently unveiled our design vision for fully autonomous cars with Concept 26. Now we are actively working on future solutions to deliver the best user experience in fully autonomous mode. Imagine a highway full of autonomous cars with their occupants sitting back watching their favourite TV shows in high definition. This new way of commuting will demand new technology, and a much broader bandwidth to ensure a smooth and enjoyable experience,” says Anders Tylman, General Manager Volvo Monitoring & Concept Center at Volvo Car Group.

Among other impacts, autonomous vehicles will greatly increase the demand on mobile networks. Volvo and Ericsson believe that this shift will see an increased need for consistent and high-bandwidth coverage outside densely populated areas such as city centres and suburbs.

“Our research shows that almost 70 per cent of all mobile data traffic will be from video in the coming years. This requires an innovative connectivity, cloud and analytics solution that is not only capable of serving multiple moving vehicles across a highway, but also has the capacity to provide the high quality, uninterrupted video service today’s consumer is accustomed to,” says Claes Herlitz, ‎Head of Automotive Services at Ericsson. By learning the most common routes and times of travel and understanding media preferences, future Volvo cars will be able to provide one-click navigation and a customised preference based list of potential media – allowing customers to choose routes and select content tailored to the amount of autonomous time that is available during their commute.

The new technology is part of Volvo’s Concept 26, named to reflect the average daily commute to work of 26 minutes.

“It’s all about people. Our research clearly shows that some people will want to use their commuting time creatively when they have full autonomous drive available, while others will want to just sit back and relax, watch online media or listen to music. Autonomous drive will make all of this possible. This is what Concept 26 has captured by reimagining the entire car experience,” says Robin Page, Vice President of Interior Design at Volvo Cars.

Concept 26 is based around an all-new patented seat design that actively cradles the driver during the transformation phase into one of the three modes: Drive, Create or Relax. Volvo says that with these three modes, the concept creates a new autonomous drive innovation platform that can adapt to new needs and technologies over time.

When the driver wishes to delegate driving to the car the steering wheel retracts, the seat reclines and a large display emerges from the dashboard allowing the driver to enjoy the time spent in the car as they like.

“We have gone to great lengths to understand the challenges and opportunities that autonomous cars will bring to people in coming years, and our flexible approach to engineering and design, enabled by our new Scalable Product Architecture, means that we can readily bring this from concept to reality,” says Dr. Peter Mertens, Senior Vice President Research and Development at Volvo Car Group.

Volvo Cars’ ongoing Drive Me research project will see an extended fleet of fully autonomous cars driving real customers on the roads of Gothenburg, Sweden, in 2017.