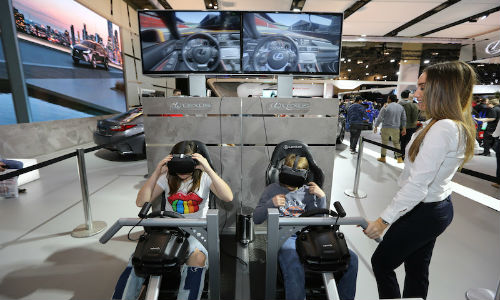 Toronto, Ontario — February 20, 2017 — Virtual reality experiences seem to be emerging as a top trend among manufacturers and exhibitors at the 2017 Canadian International AutoShow, taking place until February 26 at the Metro Toronto Convention Centre.

Whether it’s feeling the wind blow in your hair as you ride in a convertible, taking part in a virtual safety demonstration, or throwing snowballs and experiencing the four seasons, manufacturers and exhibitors are using virtual reality to take interactive experiences to a whole new level at this year’s AutoShow.

Virtual reality experiences can be found at several locations, including:

Mazda – Feel the wind blowing in your hair as you experience driving the MX5 convertible in virtual reality.

Toyota – Ride in the passenger seat and experience how safety features help you in a collision in Toyota’s Safety Sense Virtual Reality.

Lexus – Experience what it’s like to race in a Lexus against others next to you.

Audi – See what it’s like to be part of the pit crew as adjustments are made on the track.

Infiniti – See what it’s like to have the Infiniti Q30 whizz by you in the QX30 standoff.

Porsche – Ride in the passenger seat as the driver takes you around a track in Germany at the Porsche Panamera VR experience.

Lincoln – Take a virtual drive through the city in the Lincoln Continental.

Ford – Using the power of VR, hop aboard a ride that whisks you through a busy mega city of tomorrow.

Mercedes – Stop by the Mercedes booth and pick up a pair of their virtual reality goggles.

In addition to manufacturers, the Ontario Provincial Police and Ministry of Transportation have a virtual reality experience that demonstrates the effects marijuana has on your motor skills and driving on the 700 Level in the South Building, while Red Bull has a racing simulator set up.