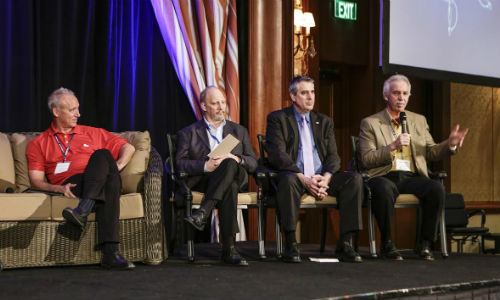 Newport Beach, California — March 28, 2016 — VeriFacts Automotive runs the monthly Guild 21 conference call, but the biggest event in the company’s schedule is the VeriFacts Symposium, which brings together the brightest lights in the industry to discuss the latest trends and ideas.

The latest version of this event recently took place in Newport Beach, California. The co-founder and CEO of Verifacts, Farzam Afshar, took some time out to talk to Collision Repair magazine about this year’s event.

Titled, “All for One – – The Consumer!” this year’s event was bigger and better than ever. Over 40 insurers and 200 leaders of collision repair operations came together with industry presidents, senior vice-presidents and CEOs to talk about the state of the industry. According to Afshar, the message attendees were left with was a bit unsettling.

“We did not intend to just tie everything up in a nice bow for you. I think some people went home with some real questions and actions,” says Afshar.
One of the early sessions, “Industry Ecosystem & Sustainability,” talked about how the modern consumer economy is changing in terms of the need to create a sustainable economic system. Summing up the discussion, Afshar explained that, “Henry Ford was one of the pioneers of consumerism. By paying employees at Ford a higher than average wage, workers were able to buy the products they were building.”

Ford famously increased salaries with the intention of this allowing employees to buy cars. “He thought the American people should go out and buy products,” says Afshar. “That consumerism started with Ford. And that’s a good thing. People bought things. The economic activity got America pumping. People couldn’t buy fast enough. But that was decades ago. Today, that’s not sustainable.”

Today, according to Afshar, “We cannot afford to get rid of every part,” and continually make and buy new ones. The idea that this culture can continue to throw out partially damaged cars is not sustainable. “We can’t keep throwing out cars. They have to be designed with repairability in mind,” says Afshar.

The idea that the auto industry needs to be less focused on a constant flow of new models was a theme of another panel, which asked a fascinating question: Are we Treating Cars like Appliances?

It was not long ago that people took ownership of a car seriously and even based their personality on the type of car they drove. That’s not the case anymore, or at least not as much as it was the case for older generations. But one has to ask: Has the shift gone too far? Have vehicles become just another consumer item? And if they have, are we now treating cars just like appliances?

“The idea was that the manufactures are not thinking about repairability,” says Afshar. “They’re rolling out one model after the other, and so the costs of repairs are rising unbelievably fast.” As anyone in the industry knows, this means more cars than ever are being written off by insurance companies rather than being repaired. And that’s not good for sustainability. “We need to be aware of this. Manufacturers need to think more about repairability,” says Afshar.

The next session was the keynote address, delivered by Michael C. Jensen, the Isidor Straus Professor of Business Administration at Harvard Business School and the author of a recent publication, New Model of Integrity: A Life-Changing Model.

“He talked about the importance of integrity being the foundation of any business. If you don’t have the integrity you are not able to perform to maximum capacity,” says Afshar, summing up the keynote idea of the conference. “For example, if the spoke of your bicycle wheel is loose (not whole and complete), your performance is diminished because your wheel is out of integrity.”

Another session on the first day touched on the many outstanding questions around rapidly advancing technology. “This session was recognizing Volvo with VeriFacts highest award called ‘Commitment to Consumer Award.”. This award was given to Volvo for putting consumer safety first by giving away the patent to the three point safety belt once the researched show how many lives can be saved around the world.

Another panel discussion delved into the need to balance the desires of insurers and OEMs. “Talking about what it takes to understand what insurers want in terms of DRP programs, but also what manufactures want in terms of certification was a really interesting conversation. We compared those two differing sets of KPI and found out that the collision repair shops are caught in the middle,” says Afshar. “Shops have to deal with the requirements of the insurer and then balance those against the requirements of the OEMs. How can the shop align these two differing needs? This was a more of an eye opener for all the constituents of RIOO (Repair, Insurance, OEM and Others) that they have to work together if they want to create a safe repair for consumer that is also efficient and cost effective.”

“We asked, ‘Is your business one that is open and willing to reinvest in itself, and are you okay to do what needs to be done, and not be weighed down by bureaucracy?’,” according to Afshar. This is a key idea in the new world dawning in the collision repair industry, a sector now beginning to deal with the advent of autonomous vehicles. The final session of the symposium, What keeps you up at night?, dealt head on with this question. This was the point when the conversation became a bit unsettling for some attendees.

“I think the people who took this session in were sort of left with this unconformable feeling. People were saying the issues today are so overwhelming. They were left the idea that they either need to get out of the business, or go to the next level,” says Afshar. There are some deep and unsettling questions facing the owners of collision repair centres. These were questions Afshar does not shy away from. “This was a unique Symposium. You didn’t get everything wrapped up with a nice bow. It was a bit unsettling. But we also have the power to do something about it. That’s what we wanted to make sure of,” he said.

The final message was that with “RIOO” united we can thrive. Closing out the conference, Afshar challenged everyone to commit to one thing that they will do to make this industry better.