Unlocking the concept of diminished value 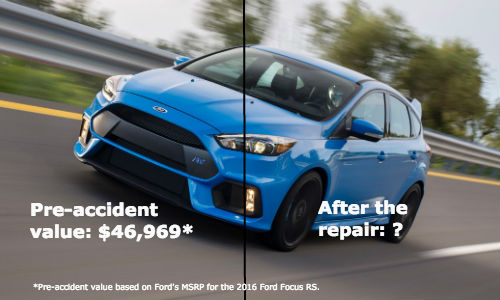 Toronto, Ontario — January 15, 2016 — The first Guild 21 conference call of the new year took place Thursday afternoon. On the call was Kevin Gardiner of Auto Club Enterprises. He unpacked the concept of diminished value (DV) for listeners and warned that small claims courts cases involving the concept are on the rise in the US.

While the term is widely used outside of the auto claims economy for a variety of things, in collision repair and auto insurance it usually refers to the value of a vehicle after repairs are completed. What is a car worth after it has been repaired and returned to the customer? This value can be controversial.

The first class relates to less than perfect results on the part of the repair facility (for example, if the paint on the repaired body panels does not match non-repaired panels). The second type of DV relates to claims or insurance related diminished value. This claim of DV often hinges on the insurer disallowing certain items, such as new OEM parts.

Both of these are relatively well known in the industry, but it’s the third class of DV that is the one being argued in more court cases these days: The consumer’s perception that a damaged and repaired vehicle is not as valuable as a vehicle of the same year, make, and model which was never damaged, no matter what the quality of repair. Everyone in the insurance and collision repair industry has dealt with this client: The repair on the car is cosmetically perfect, and the safety features and structural integrity of the vehicle have been maintained. Still, the client worries about future sale value and demands to be compensated, typically by the insurer.

“Many people have a sense that the trade-in value of a car could be reduced. What is the loss there going to be? This is where many claims against insurance companies come from,” said Gardiner, noting the claims of diminished value come up even if the parts used are newer than those replaced. Consumers still sense a loss of value.

“This often comes up around aftermarket parts. Insurance companies use these parts. But this leaves a perception of less value from owners,” says Gardiner. He went on to explain that “property damage” claims for DV claims appear to be on the rise. “Demands for these suits appear to be increasing,” he said.

Not only that, small claims courts in the US are actually awarding money to claimants and plaintiffs. There are even online appraisers now who charge up to $750 to provide a Diminished Value Report.

“When I go to conferences I hear that these claims are coming up more and more. For that $750, these appraisers are helping the consumer. Maybe sending a letter to the insurance company or lawyers. They’re guiding consumers through the claims process. So that’s something to be aware of,” said Gardiner.

Gardiner also mentioned the growing national used-car dealer, Carmax, which is “… popping up all over United States. Part of their service is they provide an immediate quote on a used vehicle. They offer up an instant value for client. When they do this for cars that have been in an accident, there could be a diminished value assigned. They may assign a lower trade-in value to that vehicle,” says Gardiner.

What can be done to counter DV claims? Insurers and collision facilities have a couple of ways of dealing with DV. It is important to understand how courts are handling these types of claims in your market. Insurance companies can develop a company-wide strategy to handle diminished value claims and have additional quality repair controls in place in terms of DRPs.

For repairers, it’s important to ensure that quality control procedures are in place and to measure results. Expect your work to be scrutinized, and engage customers in the vehicle repairs and repair warranty.

Going back up the chain, OEMs need to partner with quality repairers, and understand how claims for diminished value can impact future sales and the overall customer service experience, according to Gardiner.