Tuesday Ticker: Uni-Select hits a 52-week high and the PM drops by 3M 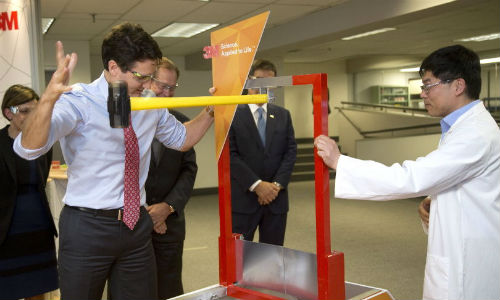 Toronto, Ontario — April 10, 2017 — This week’s edition of Tuesday Ticker looks at some of the political implications of a merger between AkzoNobel and PPG, the Prime Minister’s stop at 3M’s Canadian headquarters, Uni-Select’s stock hits a 52-week high and much, much more!

– It looks like PPG “… still intends to make a public offer for all outstanding shares of anglo-dutch paint maker Akzo Nobel N.V.,” according to a story on Market Watch. Or, as a headline in the Wall Street Journal put it, “PPG Says Paint Ain’t Dry On $24 Billion Akzo Nobel Bid.”

PPG executives say a combination of the two companies has a “strong strategic rationale” and “presents a compelling and unique opportunity for shareholders,“ according to the report on Market Watch.

PPG’s CEO, Michael McGarry, isn’t, “ruling out a sweetened offer, or a hostile takeover, in its push to buy Dutch rival,” according to reports. PPG shares are up a strong 9.2 percent over the past three months, outperforming the Chemicals-Diversified industry sector as a whole (which is up only 6.8 percent over that period).

AkzoNobel executives have said that one of the reasons for their refusal to discuss the PPG bid includes an assumption of a long and drawn-out process to win anti-trust approval from the European Union. This past week a former European Commission Director-General, Sir Philip Lowe made comments suggesting, “… political opposition to a takeover in the Netherlands would not have much bearing on a Brussels anti-trust probe,” according to a report. “Support or opposition at a political level for a merger may influence the determination of the merging companies to pursue the deal but will not influence the European Commission’s decision,” said Lowe to a London financial paper.

– Prime Minister Justin Trudeau stopped into the Oxford Street manufacturing plant of 3M Canada in London, Ontario this past week. He met with company brass in a closed-door briefing. Afterward 3M employees showed off some of the company’s latest products. Senior application development specialist Kejian Zhang demonstrated for Trudeau, “ … a high strength, doubled-side tape that creates an instant bond without any drying time, which can be used as an alternative to rivets and fasteners in the automotive and aerospace industries,” according to a report in the London Free Press.

– Shares in Uni-Select hit a new 52-week high of $35.85 Thursday. The average one year price target of analysts who follow the stock is C$46.50 over the year ahead.

– Genuine Parts Company (parent company of UAP, NAPA and CMAX) has announced a deal in its industrial distribution business in Australasia. According to a report on Seeking Alpha, “The company has been struggling to show organic growth as of late” and so it has turned to overseas acquisitions to generate some growth. GPC announced that it had come to an agreement to buy a 35 percent stake in Australia´s Inenco, an “industrial distributor of bearings, power transmission and seals that operates both in Australia and New Zealand,” according to a report. Once all of Inenco is acquired, “the deal will add roughly 2 percent to pro-forma sales.”

– Also in Australia this week: Axalta announced it “rebranded its customer consultancy program in Australia and New Zealand,” according to a report on Australia’s BodyShop News. Previously known as Refinish Performance Management, the division will now be known as Axalta Services, and “is designed to ensure the company’s relationship with its customers extends beyond products and colour technology.” Axalta’s augmented customer support program will cover a broad range of services including personalised consulting and coaching, training courses on best practice procedures using lean and pre-lean concepts, industry networking opportunities and access to marketing and managing tools. The Axalta Services program will be managed by Dean Mills, a 30-year veteran of the refinish industry, who joined the Queensland, Australia team in January 2017.

– Scotiabank reaffirmed its rating of “sector perform” for shares of AutoCanada in a research report sent to investors on Friday morning. The brokerage currently has a C$22.00 price objective on the stock. AutoCanada is a group operating dealerships, and hence repair bays, across the country.

– Reports in the financial press note that analysts expect Sherwin-Williams to report earnings per share of $2.08 when the company reports its financial results on April 20. This would represent an increase of almost 15 percent from last quarter when the company announced earnings per share of $1.81. That number would represent a total profit of $195.37 million. That assumes, of course, that the predictions are correct. We’ll have to wait and see the numbers.

– March vehicle sales figures for the US are in, and are not good. Sales have declined somewhat and Ford took a real hit to earnings as a result. A flurry of news stories followed. Some of the reports claimed the declines in vehicle sales are temporary. Others claim this decline is the start of a longer-term downtrend in vehicle sales. The two different takes can be summed up thusly:

• An article on Bloomberg arguing vehicle sales “are only dipping for a bit” claims the “huge spike during the recession as auto sales plunged below the replacement rate” will see vehicle sales rise in the years to come as the vehicle fleet ages. “As the economy continues to strengthen, population growth is shifting from core urban areas and close-in suburbs to far-flung exurbs, just like we saw in the mid-2000s. Exurban communities lack walkability and transit options, meaning more auto dependency, more miles driven, and ultimately, more vehicles sold.”

• On the other side of this argument are those who say the US auto industry is “about to drive off a cliff,” such as this article from Zero Hedge. According to this argument, “The ultra-low interest rates of late have brought demand forward.” That is, consumers have been incented to buy a car sooner than they might otherwise have done so (as financing was so cheap), and this creates a “demand hole” in the future. “Sustained periods of cheap credit unintentionally changes buying behavior patterns, expectations and financing structures of industries,” according to the story. “The industry has created a minimally two year hole in the market that will flood used and new auto supply inventories while buyers are effectively locked out.

– Bond-rating firm Moody’s put out an interesting report recently. Many have noted that online retailer Amazon is getting ready to enter the auto parts retailing market. Typically, the arrival of the digital retailing giant into a sector is reason for worry and concern on the part of incumbent firms. But according to Moody’s report, Auto Parts Retail — US: Still Well-Insulated from Online Threats, existing retail auto parts distributors should be okay.

According to the Moody’s report there are many consumers will prefer bricks-and-mortar outlets to online when it comes to buying auto parts. Inventories are so massive it takes someone on staff familiar with the market to help find the exact right part: “… the expertise necessary to ensure the customer receives exactly the right part results in a highly consultative selling process. That means that each retail store needs experts on staff, in addition to state-of-the-art computer capability to catalogue the parts for the 270 million cars on the road in the US,” according to the Moody’s report.

The analysts at Moody’s also note that the rise of in-house brands at the many parts retailers will also help shield them from the Amazon effect. “The use of private label parts will also continue to boost earnings for companies in the sector. Moody’s estimates that AutoZone’s Duralast brand are now approaching $2 billion annually, a significant driver behind the company’s margins of roughly 20 percent. Both O’Reilly and Advance are also promoting their own private label brands,” according to the Moody’s analysts.

– Canadian wholesale trade in original auto parts surged to a record high of $59.1 billion in January, driven by a big gain in the auto sector, according to the most recent Statistics Canada numbers. Canada enjoyed overall gains in wholesale trade over the year of 3.3 per cent from December 2016 (the largest monthly percentage gain since November 2009). But it was the motor vehicle and parts subsector that recorded the largest gain, rising a remarkable 17.1 per cent to $11.9 billion compared to the same month a year ago. “There were higher imports and exports of motor vehicles and parts in January, and motor vehicle manufacturing sales increased for a second consecutive month,” a statement from Statistics Canada said.