Tuesday Ticker: Uni-Select set to make a splash at Grey Cup, analysts upgrade Sherwin-Williams and oil prices may bounce back 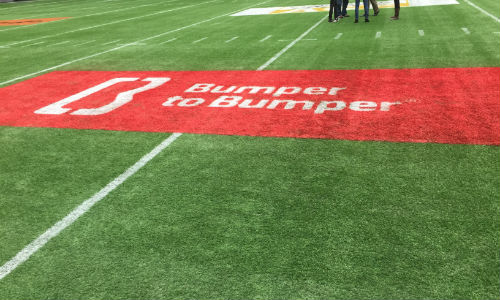 Toronto, Ontario — November 21, 2016 — The CRM Index is a group of thirteen publicly-traded stocks related to the collision repair sector. You can find the current constituent stocks here. Check in each Tuesday for updates on what the listed companies are doing. It’s the best way to keep up on the trends and information you need to drive effective decision making.

– A story in the Wall Street Journal notes that the Russell 2000 index of small-capitalization stocks has been rising for the last 11 trading sessions. This is the longest winning streak for that index since June 2003. The Russell 2000 is an index of smaller and mid-sized companies. It has risen 10 percent since Election Day. This is a better performance than the S&P 500, which is up about 2 percent since the US election. The thinking seems to be that a Trump presidency will be good for companies in general, but better for smaller ones than larger global conglomerates. Smaller companies are less exposed to global shifts in policy and currency. If Trump begins to renegotiate trade deals that might hurt the biggest, globally-focused American companies.

– Auto recycling conglomerate Fenix Parts announced Monday morning that Nasdaq has granted the company’s, “… request for an exception to Nasdaq’s filing requirement … which requires the timely filing of all periodic financial reports with the Securities and Exchange Commission …” Fenix went public in 2014 through a merger of more than a dozen North American auto recyclers. Merging the bookkeeping on so many companies turned out to be a complex, tough job. Under the terms of the exception, Fenix has until February 13, 2017 to file its second quarter Form 10-Q with the SEC. The news seemed to be very well-received in markets Monday morning of this week. The press release was issued Friday. By noon Monday the stock jumped a remarkable 8 percent. At least one sell-side analysts covering the company expects the stock to go to $7.69 within the next 52 weeks. The stock, which had been trading under $2.90, was trading above $3.80 by midday on Monday.

“Today’s announcement reaffirms our commitment to aggressively expand our Canadian automotive business and build for the future … We are better positioned than ever to be the leader in the automotive aftermarket from coast to coast,” said Henry Buckley, President and CEO of Uni-Select.

– Analysts at brokerage firm Vetr have upgraded shares of Sherwin-Williams Co. from “Buy” to “Strong-Buy” on Monday. The firm also attached a one-year price target of $304.14 to the stock. That is significantly above the current share price of around $260.

– Brokerage firm Jefferies Group reaffirmed its “buy” rating on shares of Boyd Group Income Trust Units and announced a new target price on the stock in a report sent out Tuesday morning. According to Jefferies Group, the price of a unit in Boyd could hit $100.00 over the months to come. This is up substantially from the prior price target of $88.00 that Jeffries Group had assigned to Boyd. Units in Boyd are currently trading a bit over $87.00 a share.

– Shares in Advance Auto Parts rallied last Tuesday. The company is the biggest retailer of aftermarket car parts and accessories in the US. It delivered third-quarter results that were not as bad as feared. The company also presented a five-year plan to cut costs and boost margins. The good news saw shares in the company jump more than 3 percent.

– Samsung has been badly burned by the company’s disastrous roll-out of its latest smartphone. Handsets began exploding, and were banned from planes. It now seems the company is taking a turn and getting on the connected car trend. Last week the company announced it would pay $112 per share, or $8 billion, for a company named Harman. The company is known for speakers, but also designs devices for automakers, such as navigation systems. The acquisition has kicked off something of a buying spree on the stock. Shares in another company considered a potential acquisition target, Visteon, surged about 16 percent in value last week in the wake of the Samsung-Harmon deal. Delphi Automotive and Mobileye (a company that makes radar devices for cars) both rose as well.

– The Alberta-based financial services firm ATB Financial issued a report last week saying that oil prices would continue to increase in 2017 and that the “worst is over” for the current downtown in the province that has followed on the multi-year decline in the price of crude. This is good news for a provincial economy that has been suffering for some time now.