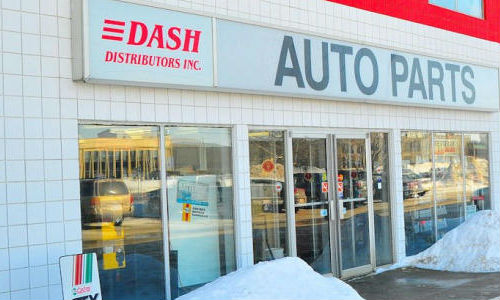 Toronto, Ontario — September 25, 2017 — This week’s Tuesday Ticker looks at acquisitions for both Uni-Select and GPC, AkzoNobel shakes up the C-suite, analysts upgrade AutoCanada estimates and much, much more!

Quebec-based distributor Uni-Select continues to expand. This past week the publicly-traded company announced that its subsidiary Bumper to Bumper had acquired Edmonton, Alberta-based organization Dash Distributors. Dash is an independent distributor of automotive products. The company was previously a member of a non-affiliated buying group.

According to a press release, Dash is one of the largest independent distributors of automotive products in Alberta, with 49 sales and service professionals active in four locations across the wider Edmonton area. Established in 1992, Dash provides products and services to a customer base that includes auto dealerships and independent garages.

Brent Windom, President and COO of the Canadian Automotive Group for Uni-Select, was quoted as saying, “Dash has a well-established track record of superior customer service and product availability and we are very pleased to welcome them to Uni-Select.”

This acquisition gives Uni-Select a total of 54 corporate stores under the Bumper to Bumper banner. Shares in Uni-Select are trading around CAD $27.00.

Genuine Parts Company (GPC) announced this week that it will buy a European parts distributor. Alliance Automotive Group (AAG) is the target. The company also distributes tools and workshop equipment on the continent. A press release notes that Genuine Parts will acquire AAG from the current owners, a pair of private equity funds managed by Blackstone and the co-founders of AAG.

According to the release, the acquisition is valued at a total purchase price of approximately USD $2 billion, including repayment of AAG’s outstanding debt upon deal close. The transaction has been approved by the board of directors of GPC and is expected to close in the fourth quarter of 2017, subject to closing conditions and regulatory approval. AAG is the second largest parts distribution platform in Europe, with a focus on light vehicle and commercial vehicle replacement parts. The company is expected to generate gross annual billings of approximately USD $2.3 billion.

It looks like AkzoNobel is making some changes to its top-level executive team. The company, which recently fended off a takeover attempt by PPG, has seen a new CEO recently take over. Now the company has hired a new CFO from a financial services company called Intertrust. Maarten De Vries takes over from former CFO, Maelys Castella, who stepped down a week and a half ago. Former AkzoNobel CEO Ton Buechner stepped down in July due to illness. Chairman Antony Burgmans has announced he will leave the company in April. The company’s shares are trading at a record low of about EUR €73.00.

Analysts at Cormark Securities have increased their full year 2017 earnings estimates for AutoCanada. In a report issued last Wednesday, the company said it expects the publicly-traded auto dealer to post earnings per share of $1.55. This is up from a previous estimate of $1.54. Cormark analysts also said they expect 2018 earnings to come in at $2.15 per share. The positive update follows on a similar move by Scotiabank, which recently boosted its price target on shares of ACQ from C$22.00 to C$23.00. Royal Bank also boosted its price target to C$25.00 from $22.00 this past August. Shares are currently trading just above $24.00.

A press release out from 3M notes that the company and its subsidiary, 3M Innovative Properties, have filed a lawsuit in the Western District of Wisconsin against China-based Thunder Finish. 3M alleges, “… infringement of patent and trademark rights related to 3M’s PPS technology used in the automotive collision repair industry,” according to the press release. The suit alleges that Thunder Finish aftermarket spray gun paint cup products, which are made in China and sold in the US, infringe 3M patent rights directed to 3M PPS technology that enables the efficient mixing and spraying of coatings for automotive collision repair and other applications. The suit also alleges that Thunder Finish’s marketing materials for these products infringe 3M’s registered trademarks.

– The ongoing free trade renegotiation talks continue in Ottawa this week. According to a report by the Chicaco Tribune, “The debate is expected to heat up this week in Ottawa, where the President’s team is meeting Canadian and Mexican leaders for a third round of trade talks. The United States appears to be preparing to demand that duty-free goods under the North American Free Trade Agreement be made with more domestic parts.”

According to the story, at least some manufacturers seem to be of the opinion that demanding more American parts be used in vehicle construction would likely ensure US-built cars are expensive and uncompetitively priced.

– Officials from the US Federal Reserve said last Friday that interest rates may, “… peak at a level far below previous rate-hike cycles,” according to a report by Reuters. John Williams, President and CEO of the San Francisco Fed was quoted as saying, “I think the overall view that we would be raising rates gradually over the next two years and getting back to a normal level is the one I think I have a lot more confidence in.” He went on to say that a normal rate, “is likely to be around 2.5 percent.” It was not very many years ago that “nearly everyone” thought the long-term, normal interest rate was 4 percent. Since the onset of the Great Recession, Fed officials have been reducing their estimates of what a normal rate of interest is. Even with interest rates as low as they are, the economy is still sluggish. The idea that rates would rise to 4 percent seems unlikely, as that rate would be extremely detrimental to indebted consumers.

– Ford is cutting production at five North American assembly plants through the rest of this year as, “… US demand for new vehicles slips due to lower gas prices,” according to a report by CTV. The company is cutting the production of smaller cars rather than its more profitable trucks. The shutdowns at various plants will last two to three weeks.