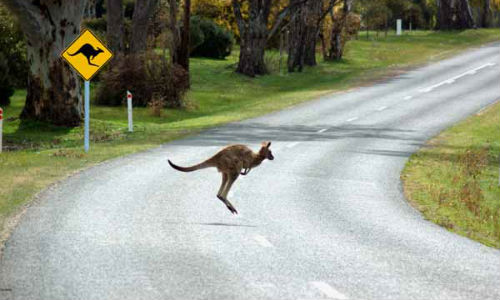 Toronto, Ontario — July 9, 2017 — In this week’s Autonomous Report, we look into the spread of “cartapping” by police, Volvo’s kangaroo problem, Bill Ford’s thoughts on autonomous vehicles (AVs) and much, much more!

– Auto component maker Bosch reports that the company has experienced, “… a surge in demand for radar systems and video sensors as automakers race to add driver assistance features and automated functions to cars.” A report from Reuters notes the company announced, “… it expected sales of radar systems to leap by 60 percent and of video sensors by 80 percent this year.” The company’s Mobility Solutions division now employs 227,000 people and is said to be about to expand its business seven percent this year as auto makers continue to add sensors, cameras and radar systems to their vehicles. Last year was the first that the sale of driver assistance systems reached 1 billion Euros according to the report.

– A feature in Forbes looks at the issue of “cartapping,” a growing practice in which police forces use connected car devices to capture criminals. A few examples from the story:

A 2014 warrant allowed New York police to trace a vehicle by demanding SiriusXM activate and monitor the radio installed on the target vehicle as a tracking device for a period of 10 days. According to the story, “SiriusXM … complied with the order and did so by switching on the stolen vehicle recovery feature of its Connected Vehicle Services technology, [which is] available in a subset of cars it supplies.”

In December 2009, police asked GM to hand over OnStar data from a vehicle rented by a suspected crack dealer. Police did not know what the car “looked like or where it was” but with OnStar tracking they could follow him from Houston to Louisiana. According to the story, “OnStar’s tracking was accurate enough to allow police to identify that vehicle among the many that were on Interstate 20 that evening.”

In July 2016 a “… 12-year-old girl was in a car involved in a high-speed chase, with her 7-year-old sister as a passenger.” Police used OnStar to, “… disable the engine as the juvenile drove into a high school car park,” according to the story.

– Volvo admitted this past week that the company’s Large Animal Detection system doesn’t work in the case of kangaroos. The system—developed in Sweden—can identify and avoid, “deer, elk and caribou,” but not Australian marsupials. Testing of the vehicle down under finds the device cannot, “… adjust to the kangaroo’s unique method of movement,” according to a report by The Guardian. Volvo’s Australian technical manager appeared on ABC in Australia to explain that the troubles had arisen because, “… their cars’ object detection systems used the ground as a reference point … when it’s in the air, it actually looks like it’s further away, then it lands and it looks closer.” As a result the cars were unable to process the movement. Modern AVs, of course, rely on learning-based software rather than rules-based software. They need to experience situations and then work those situations into the way the program works. It looks like those cars will need a little more experience in Australia.

– Volvo also has a new anti-collision device that will run a car off the road instead of rear-ending a car in front of it. According to the same report, the cars can automatically maintain a safe distance from the vehicle in front, and, “… spot potential collisions in urban environments, a feature called ‘run-off road assist’, which would keep passengers safe in near-collisions.”

– The US House Energy and Commerce Committee is debating a measure that would allow the, “… US Secretary of Transportation to designate up to 100,000 cars annually that would be exempt from the existing Federal Motor Vehicle Safety Standard.” The current limit on the exception is 2,500 cars per year.

Critics say automakers have too much leeway to test self-driving cars under the package of bills currently being considered. “There would be less safety and more pre-emption, and it’s… wholly unnecessary to (fulfill) testing,” said Alan Morrison, Lerner Family Associate Dean for Public Interest and Public Service Law at the George Washington University Law School, according to a report in the Detroit News. “These exemptions are not necessary for testing, they are … for deployment … Let me tell how broad this exemption is: It would go from 2,500 vehicles a year to 10,000 vehicles in a 12-month period for every single manufacturer of these vehicles, and I believe there are 30-something companies. If my math is right, you multiply 30 times 100,000 per year and you get an idea of how much this exemption is going to allow these vehicles to be on the road with no NHTSA supervision whatsoever.”

The story goes on to note that President Donald Trump has not yet appointed a NHTSA administrator or even a deputy chief for the agency, which essentially means the agency doesn’t even have an employee who could testify on major legislation that affects it.

– US Rep. Greg Walden, R-Ore., took part in the hearings. He was quoted as saying, “I believe future generations will look back and say what a bunch of barbarians. You drove yourself? And how did you text?”

– A regulatory sticking point in the United States, according to David Strickland of the Self-Driving Coalition for Safer Streets (and a former NHTSA administrator) is this: “In the United States, the federal government has been in charge of safety standards for vehicles: rules for machines. Likewise, states have been in charge of how those vehicles are operated through laws: rules for humans.” In a report on Tech Crunch, Strickland asks: “So if the machine takes over the duties of the human, is that the responsibility of the federal government to regulate or the states to regulate?”

– Bill Ford recently spoke at a think tank in Washington. His comments focused on AVs. He reassured those in the crowd that people who enjoy driving will still be “able to command their vehicle” even when autonomous vehicles become ubiquitous. Some of the other interesting points the great-grandson of Henry Ford made, as reported by Automotive News Europe:

“There will always be people who love to drive and we’ll have vehicles for them. But if you live in LA or Phoenix, you may not love your daily commute, so you’d rather free up time to do things … The choice will not be binary.”

Ford predicts AV adoption will start in cities, but will spread to rural areas where, “… these vehicles will be important in helping to deliver health care for people who don’t have easy access to medical providers.”

Ford has purchased a small start-up called Chariot that serves as a crowd-sourced shuttle by gathering up 10 to 15 people in a transit van.

“The autonomous-vehicle space is too large and complex for any one company to dominate, so Ford will compete with, partner with and, in some cases, acquire other companies,” said Ford.

– The Toyota Research Institute (TRI) announced it is exploring the use of blockchain technology in the “new mobility ecosystem.” Blockchain tech is a distributed database that is used to maintain a continuously growing list of records. By design, blockchains are inherently resistant to modification of the data.

The learning-based nature of AVs means the industry will require huge amounts of data to “teach” the learning-based software in these cars. According to a report on Finance Magnates about blockchain tech and Toyota, “Hundreds of billions of miles of human driving data may be needed to develop safe and reliable autonomous vehicles … Blockchains and distributed ledgers may enable pooling data from vehicle owners, fleet managers, and manufacturers to shorten the time for reaching this goal, thereby bringing forward the safety, efficiency and convenience benefits of autonomous driving technology.”

– It appears GM has aspirations to open more Cruise Automation locations across the country. A recent story by Detroit News notes a job posting for a construction project manager in Phoenix: “We’re looking for construction project manager to help launch new Cruise offices across the United States.” The posting said the candidate will be responsible for oversight of two to three “concurrent new market deployments.” General Motors bought Cruise, an AV company, a little more than a year ago. The head of GM, Mary Barra, has said the company is letting Cruise operate like a “start-up,” that is, the company is not being worked into the more hierarchical GM corporate infrastructure. It’s being allowed to develop rapidly, on Silicon Valley time. According to media reports Cruise is working on high definition mapping and has allowed GM to become the first major automaker to develop its own AV software in-house.

– This past week, analysts and institutional investors listened as the Chief Financial Officer of GM indicated that the OEM was looking into utilizing its, “… dealership network as fleet managers for autonomous vehicle services,” as reported by Mobility Finance. Last week it was reported in this space that Waymo was partnering with Avis to create an infrastructure for managing AV fleets. When the GM CFO was asked about similar plans he was quoted as saying, “I would say we have done a lot of thinking around that internally, and it’s early days relative to how that business model may play out. The autonomous vehicle fleet and ridesharing network will be something completely different than what’s anybody has been able to do before … So there’s a lot of thought being given around a lot of different approaches and business models. The dealer sells and finances, but they also have space, and knowledge, so why not become a fleet operator? They easily could in the new mobility ecosystem. The cars have a place to park and be repaired and [dealerships] have brand loyalty.”