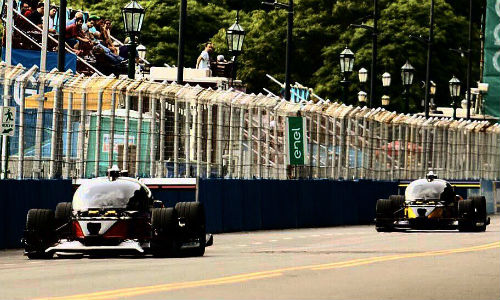 Toronto, Ontario — February 19, 2017 — This week’s Autonomous Report looks at results from the first self-driving auto race, a future where the data a car generates is worth more than the car, Ford’s self-driving test program runs afoul of human boredom and much, much more!

– An electric driverless car racing series, Roborace, held its first real race recently. Two robot cars in the Formula E series at the Buenos Aires ePrix made their way around the track, “… at a cautious yet respectable pace, according to a report on Electrek. The winner reached a top speed of 115 mph. The losing car got into an accident and took itself out of the race. The goal of the series is to eventually have, “… several teams racing against each other, each with the same car design, but writing their own software.” That is, the teams will have, “… no more input into the car’s decisions during the race as they would for a real driver (being able to tell the cars to push harder, slow down, and make pit stops, perhaps). Otherwise, the software will do all the driving on its own.”

– Elliot Katz, a lawyer in the “autonomous car practice” at a major American law firm was recently interviewed in Forbes magazine. He talked about some of the challenges that manufacturers face as they race to provide fully-automated vehicles. According to Katz, Level 5 automation—a car that can do “everything and anything a human could do with zero human intervention”—is still several years away. He also said the impetus to develop AVs is to reduce the 1.2 million traffic fatalities that take place each year and “… provide true mobility to certain individuals—such as the visually impaired, physically disabled, or elderly—who otherwise would have had to rely on others to get from point A to B.”

– A report on the CNN website claims that the data created by AVs will eventually be more valuable than the vehicle itself. Data is the, “… currency of the digital age,” according to Jim Barbaresso of infrastructure solutions firm HTNB. He says the data from AVs could be, “…the beginning of a modern day gold rush.”

The story goes on to note that, “Vehicle sensors, for example, can better tell when an engine part is in need of replacement. A back-up camera doesn’t just help us park, it can tell how many pedestrians or vehicles are on a block.” That is, all the sensors on a car now generate data, which can be analyzed to make money in a way similar to Google or Facebook, which offer free services to billions, and make a fortune off the data they collect. AVs will create massive amounts of data.

“A self-driving car can generate 1 gigabyte of data per second. At that rate, about 30 seconds of driving would fill up the memory on a typical iPhone,” according to the story.

Uses for the data are already emerging. “A car driving down a street can identify open parking spaces thanks to its cameras and sensors. Knowing the location of the nearest open parking spot is valuable for anyone parking in a crowded city,” according to the story.

The story quotes Ben Volkow, the CEO of otonomo, an Israeli startup that sells vehicle data, as saying that, “…2020, automakers will be able to make more money selling vehicle data than the cars themselves.”

He also predicts that the autonomous taxi market could be worth $10 trillion in the early 2030s. In comparison, vehicle sales, “… are a $2 trillion market today.”

So intent are manufacturers on creating this tech that engineers in the self-driving car area are making huge amounts of money. According to the CNN story, “The going rate for a self-driving car engineer is $10 million a person.”

– General Motors plans to deploy, “…thousands of self-driving electric cars in test fleets in partnership with ride-sharing affiliate Lyft Inc, beginning in 2018,” according to a report by Reuters. The company will deploy a fleet of its new e-car, the Bold. According to the story, “GM has no immediate plans to sell the Bolt AV to individual customers … GM executives have said in interviews and investor presentations during the past year they intend to mass-produce autonomous vehicles and deploy them in ride services fleets.” A source quoted in the story explained why, “If you assume the cost of these autonomous vehicles, the very early ones, will be six figures, there aren’t very many retail customers that are willing to go out and spend that kind of money … But even at that sort of cost, with a ride sharing platform, you can build a business.” Deploying a fleet of six-figure AVs can be profitable if the cars are working (generating revenue) 24-7. Waiting for each consumer to be able to afford a six-figure AV would stall the development of the market. A year ago, of course, “GM paid $500 million for a minority stake in Lyft, the second-largest U.S. ride sharing firm after Uber.”

– Elon Musk, the CEO of Tesla, gave a speech in Dubai recently in which he predicted that while Tesla’s first level 4 autonomous driving system will arrive at the end of the year, but “… the disruption will be relatively slow due to the huge size of the transport industry.”

According to Musk, “There are about two billion cars in the world and the total annual production capacity is about 100 million cars, which makes sense since the average life of a car before being totally scrapped is about 20-25 years. So the point for which we see autonomy appear will not be the point when we see a massive impact on people because it will take a lot of time to make enough autonomous vehicles to disrupt.” The period of “disruption” says Musk will occur over, “… about 20 years.” He went on to say he thinks, “… the bulk of the change happening within 10 years – when he predicts that almost all new cars will be capable of self-driving,” according to the story.

Musk also addressed the issue of the effect that self-driving vehicles will have on millions of people in the workforce that drive vehicles for a living. According to Musk governments will have to implement some kind of basic income to facilitate the shift to AVs. “Twenty years is a short period of time to have something like 12 to 15 of the workforce being unemployed,” he said. The story states that Musk sees, “… universal basic income as the best solution for artificial intelligence taking over human labor.” Bill Gates also chimed in on this issue, saying this week that robots that take jobs should be taxed on their ‘income’ as a way of funding the transition to an AI-assisted world.

– Ford reports this week an unexpected problem with its testing program for self-driving cars. A news report claims, “… the U.S. automaker has started noticing a problem during test drives: Engineers monitoring the robot rides are dozing off.” Apparently Ford has, “… tried to roust the engineers with bells, buzzers, warning lights, vibrating seats and shaking steering wheels. They’ve even put a second engineer in the vehicle to keep tabs on his human counterpart. No matter — the smooth ride was just too lulling and engineers struggled to maintain ‘situational awareness’,” according to Raj Nair, Ford’s product development chief. He was quoted as saying, “These are trained engineers who are there to observe what’s happening. But it’s human nature that you start trusting the vehicle more and more and that you feel you don’t need to be paying attention.”

The story goes on to suggest that, “the struggle to prevent snoozing-while-cruising has yielded a radical decision: Ford will venture to take the human out of the loop by removing the steering wheel, brake and gas pedals from its driverless cars debuting in 2021. That sets Ford apart from most automakers including Audi and General Motors Co., which believe drivers can be counted on to take the wheel if an accident is imminent.”

Waymo, the self-driving car company from Google, has also moved to take the steering wheel out of AVs. “Ford and Waymo’s views show there’s a rift developing among the creators of autonomous cars over what role — if any — humans should play when cars begin driving themselves,” according to the story. “Most automakers believe that, at least initially, people must supplant the robot to avoid crashes in complex situations. Others contend that asking an inattentive human to respond in seconds to a life-or-death situation is a recipe for disaster.”