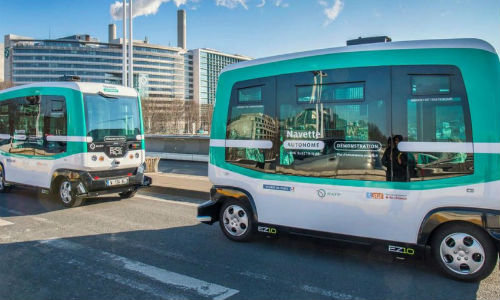 Toronto, Ontario — September 17, 2017 — In this week’s Autonomous Report, self-driving buses rollout in Atlanta, a big test for driverless pizza delivery, why Alphabet’s first autonomous vehicles (AVs) may be trucks and much, much more!

– Domino’s Pizza and Ford are teaming up to research the reactions people will have to, “… robots bringing dinner to the driveway.” According to a report by Bloomberg, “… the hot pies will arrive in an autonomous-capable Ford Fusion.” There will be a person in the car, but, “The goal of the partnership is to examine how customers react to stepping out of their homes and walking to the car to fetch their pizza from a locked warming compartment, rather than having it carried to their doorstep. ‘We’re interested to learn what people think about this type of delivery,’ Russel Weiner, president of Domino’s USA, said in a statement. ‘The majority of our questions are about the last 50 feet of the delivery experience. For instance, how will customers react to coming outside to get their food?’”

Domino’s customers in the test city of Ann Arbor will be, “… randomly selected to have their pizza delivered in this way. Customers who agree to take part in the test will be able to track their pizza as it rolls through the streets via an app on their phones.”

– The New York Times reports on the National Transportation Safety Board (NTSB) report on the crash involving a Tesla in Florida that many consider the first auto accident fatality involving an AV. The study found that the non-LiDAR equipped AV system built by Tesla had “played a major role” in the accident. According to the report, “The combined effects of human error and the lack of sufficient system controls resulted in a fatal collision that should not have happened,” Robert L. Sumwalt, Chairman of the NTSB, was quoted as saying.

The story goes on to say, “… the vehicle made multiple trips along the route, ferrying media members (and Mayor Kasim Reed) eager to see the technology at work … The test on North Avenue in the city’s bustling Midtown area meant that Atlanta has become one of the largest urban areas to test autonomous vehicles, joining Sao Paulo and Shanghai.”

There was a driver on hand in the vehicles, but “… they made minimal human interventions during the trips.” The system will eventually expand to, “… stretch more than two miles to Georgia Tech … Additional technologies to be added to North Avenue include adaptive traffic signals, video surveillance systems, connected vehicle systems, and even technology that would allow emergency vehicles to preempt traffic lights to respond to an emergency. It’s all part of a push to allow Atlanta to be an early adopter of autonomous technology,” according to the report.

– A report on Barron’s cites a recent study that suggests, “Although 70 percent of consumers polled said they loved driving, 53 percent said they would buy a fully autonomous vehicle next time they were in the market for a new car, with women (59 percent) more likely to do so than men. The report showed that there are still plenty of concerns about self-driving cars, with many consumers worried about safety (and here women are more concerned than men).”

– Alphabet’s driverless vehicle technology may come to market first in trucks, rather than as an autonomous ride-sharing service, according to John Krafcik, Chief Executive Officer of Alphabet’s Waymo division. Appearing at an event hosted by media outlet Bloomberg, he was quoted as saying, “Ride-sharing makes a lot of sense for the world. For goods transportation, which could travel primarily on highways, there’s a good and compelling use-case there, too. Either of those two might be the first ones you see.”

– Krafcik was also the subject of a major Wall Street Journal story that looked at how Silicon Valley and Detroit have overcome early mistrust between the tech and auto sectors. Krafcik’s comments provide the best play-by-play of the early stages of the new AV industry:

“The mutual mistrust has fostered a confusing array of alliances between auto makers, ride-hailing companies, rental-car concerns and tech giants. Silicon Valley looked down its nose at the mundane work of manufacturing. Detroit feared being turned into a commodity producer making a shell for others to fill, like cellphone handset makers.”

Krafcik has been working to repair the various misunderstandings between companies in the new sector. He has the resume to do this, having held jobs on both sides of the aisle.

According to Krafcik, there were almost 17 million new cars sold in America last year. The country’s auto fleet drove three trillion miles. The challenge, he says, is to get consumers, “… spending on the distances they travel in cars rather than on the cars themselves … If the average large automotive company turns a profit of about $1,400 per vehicle sold … a vehicle that lasts 150,000 miles only garners about a penny per mile … The thing that the industry is struggling with right now is that for the 100 years it’s been in existence it’s been focused on the number of units built … we are moving to a world where … it has to be miles driven.” Krafcik also said his intention is not to, “… invade the auto industry or destroy the existing supply chain.”