Toronto, Ontario ⁠— The students of Tropicana Community Centre’s Pre-Apprenticeship Auto Body and Collision Repair class are having a very happy holiday indeed, thanks to a very generous donation from LKQ Corporation. On top of body panels for Centennial College students to test their skills on, LKQ also supplied OGIO backpacks, vests and top-notch supplies […]

Toronto, Ontario — Honda Canada Foundation announced a new partnership with FIRST Robotics Canada, to encourage young people to pursue a post-secondary education in engineering and technology.  The $150,000 contribution made by Honda Canada Foundation will help build an inclusive community, with meaningful mentorship opportunities that will empower young people to think big and build […]

Toronto, Ontario — Ford of Canada and Benton Fry Ford have donated a 2020 Ford Edge to Loyalist College, to be used by skilled trades students in the Automotive Service Technician Apprenticeship, and other automotive students at the college. “It’s a pleasure for Benton Fry Ford, in partnership with Ford of Canada, to donate this […]

Mississauga, Ontario — Cox Automotive Canada’s team members attempted to “Climb Every Mountain” by walking a combined total of over two million steps and raising more than $12,000 in support of Make-A-Wish Canada.  For the first time, Cox Automotive Canada joined its International colleagues in a campaign called Climb Every Mountain to raise money in […]

Toronto, Ontario — The Collision Industry Foundation (CIF) announced that NAPA AUTO PARTS has joined the CIF Annual Donor Program at the Urgent Care level, which provides support to collision repair individuals who have been impacted by natural disasters or other catastrophic events.  “Providing service is at the core of what we do at NAPA […]

Toronto, Ontario — As COVID-19 vaccination efforts continue to ramp up across the country, Women’s College Hospital (WCH) in Toronto received a welcome surprise when a local Toyota dealership offered three minivans—complete with volunteer drivers— to support the hospital’s mobile vaccination and testing program over the next six months. Women’s College Hospital is supporting Toronto […]

Mechanicsville, Virginia — AirPro Diagnostics has joined the Collision Industry Foundation (CIF) Annual Donor Program at the highest level–1st Responder–with a $10,000 pledge. The Annual Donor Program was designed to bring needed, recurring resources to CIF, so it can deliver on its mission to answer the call when those in the industry have been impacted […] 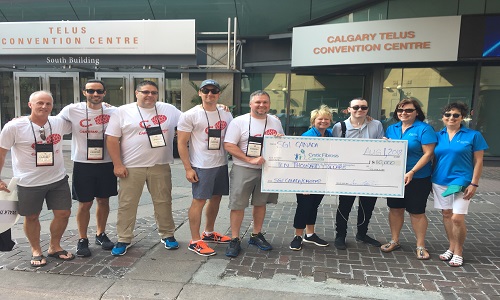