Toronto, Ontario — Automotive paint manufacturer PPG reported on Tuesday that the company expects third quarter sales volumes to drop between US$225 million to US$275 million, compared to the coatings company’s predictions at the start of the third quarter. PPG attributes this projected drop in sales to ongoing challenges in the manufacturing supply chain, such […]

Toronto, Ontario — The AIA High Fives for Kids (H5s4Ks) Foundation announced the addition of Tom Dunlop to its board of directors.  Dunlop’s appointment comes as long-time H5s4Ks advocate Joe Mercanti steps down from the foundation’s board as part of his retirement from the aftermarket industry. Starting his automotive aftermarket career as a licensed mechanic, Dunlop […] 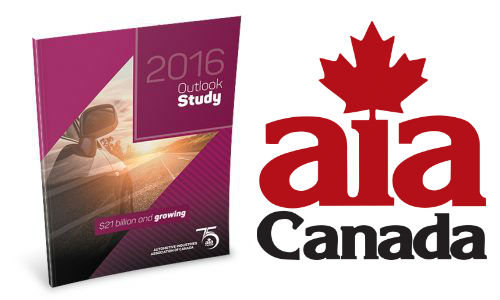 By Mike Davey Ottawa, Ontario — October 24, 2016 — Business conditions for the automotive aftermarket have never been better, according to the 2016 Outlook Report released by AIA Canada. A surge in light vehicle sales in the last two years has had a knock-on effect throughout the entire ecosystem, with the Canadian automotive aftermarket […]