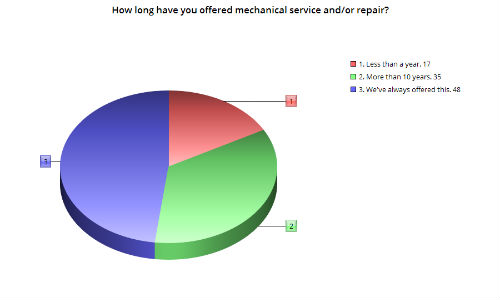 Hamilton, Ontario — May 9, 2017 — The typical car accident often results in damage that isn’t part of traditional collision repair, specifically mechanical repair and glass work. Traditionally, these have been handled by subcontractors. However, our most recent survey seems to show that more repairers are bringing these operations in-house.

There are at least two reasons a repairer might choose to do this, and they’re both fairly obvious. First, having an operation entirely under your control should lead to decreased cycle time. Second, why pay subcontractors when the business could instead bring in more revenue?

Collision Repair magazine runs a new survey every week. The next survey focuses on I-CAR Gold Class recognition and third-party accreditation programs. You can participate in that survey at this link.

First, survey respondents were asked to indicate the role they play in the automotive claims economy. About 56 percent of survey respondents in this case were owners or managers of independent repair facilities. The remaining 44 percent were owners or managers of chain or network repair facilities. In other words, nearly half of the responses to this survey came from banner shops, rather than independents.

We asked our survey respondents to tell us if their facility offered mechanical service and repair. In the case of multi-shop operators (MSOs), they were asked to answer “Yes” if at least one facility offered this service.

The majority of survey respondents (64 percent) offered at least some mechanical service in-house. The remaining 36 percent of respondents do not. We also received a few comments on this question. All of the comments were very similar, boiling down to “only if it relates to the collision.” In other words, they have the capacity to perform the work, but do not engage in run-of-the-mill mechanical repairs or services.

Respondents who indicated they did mechanical work were asked how long they’ve offered this in-house. This part is really interesting. The majority (48 percent) say they’ve always offered mechanical repair. The next largest group (34 percent) says they’ve been doing it for 10 years or more. The remaining respondents, however, have been doing it for less than a year (17 percent). There were other answers available, but no respondents chose them. In the case of our survey respondents, there are really only two groups. There are those who have been offering it for a long time, and those who have just started.

In the case of the shops that do their own glass work, the largest group is again “We’ve always done this” at about 40 percent of respondents. However, there is a clearly more spread in how quickly shops are adopting this practice as opposed to those bringing in mechanical repair. The second largest group of survey respondents (20 percent) have only been doing their own glass for between one and three years.

Collision Repair magazine’s next survey puts the spotlight on I-CAR Gold Class and third-party accreditation programs. The survey consists of just a few multiple-choice questions and should take less than two minutes to fill out. You can access that survey here, and watch for results next week on collisionrepairmag.com!