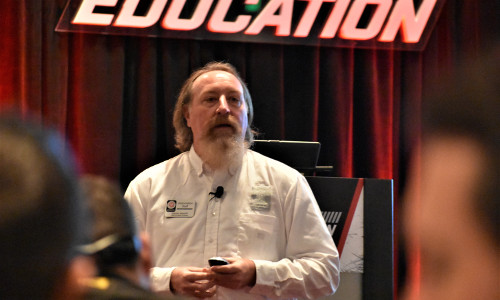 Las Vegas, Nevada – November 1, 2017 — Gavin Knapp of SEMA Market Research spoke to journalists and industry insiders on Tuesday (October 31), regarding the current trends in the off-road and truck sector.

According to Knapp, the industry is becoming muddled by confusion around correct terminologies. “A lot of media uses the term truck when they mean CUV or crossover,” said Knapp. “So be careful what you’re consuming and what you’re retweeting.”

He believes that the dominance of the crossover market is over-exaggerated, and that shops which specialize in parts or modification for trucks and off-road vehicles need not worry. “Even though the CUV market has expanded, the market is a lot smaller than pickups,” said Knapp.

Knapp claimed that pickup trucks and SUVs are big sellers, and that for off-roading, jeep owners are far more likely to modify their vehicles. “The jeep wrangler is the most often modified vehicle on the road: 62% are modified,” said Knapp. He added: “The pickup market is still a bigger market, but the wrangler guys are very passionate.”

Knapp asserts that a smaller percent of truck owners will go to shops for modifications or custom body work, but there are many more pickups on the road, meaning it can still be a big money maker. “We went out and surveyed owners to find out how many people were modifying their pickups [compared to jeeps],” he said, “about 40 percent have modified their trucks in significant ways.”

According to SEMA market research, brick and mortar shops need not worry too much about the influx of online stores, so long as they stay with the times. Knapp said: “While 75 percent of people have researched parts online, in person interactions won’t go away.” However, he added that bodyshops would need to make those visitors comfortable when they come in.

Most of the research points to there being a lot of people who will look up pictures and specifications online, but go to the stores to pick up parts. “If they’re looking for parts online, and they can’t find you online, then you’ll have problems.”

The research tools can be important for stores and shops trying to fit in in the current market. “Customers found visiting brick and mortar shops and garages more valuable overall than online research,” according to Knapp. Thankfully. he also said that people are far more comfortable taking a truck to a body shop for bodywork or garage for suspension work than doing it themselves.

Knapp also added that in terms of modifications for off-road use, most buyers will purchase modifications – such as lift kits, suspension, etc. – within three months of purchasing their truck or jeep.