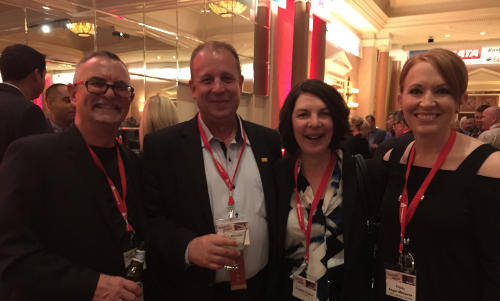 Las Vegas, Nevada — November 5, 2018 — In part one of our extended coverage of last week’s SEMA Show in Las Vegas, we take a look at Collision Repair’s big takeaways from the festivities, from the show-stealing performances of Canada’s delegates to the big business opportunities our collision repairers saw firsthand!

With more than 100,000 car enthusiast’s arriving in Las Vegas from around the work last week, Canada’s delegates did more than just represent Canada’s automotive aftermarket, they made its strength and resilience the talk of the town! In fact, one of the most warmly received events was the Automotive Industry Association of Canada’s Canada Night at Caesar’s Palace.

With Canadian flags hanging everywhere, the world famous casino looked more like a belated July 1st party than the ancient pleasure palace it imitates! With more than 1000 people in attendance, it was a veritable who’s who of the Canadian auto aftermarket—though with some notable absences. A delayed Air Canada flight out of Toronto prevented many major industry figures, including Fix Automotive Network CEO Steve Leal who arrived more than two-and-a-half hours early for the flight, from attending the party!

Check out Collision Repair’s next issue, available in early December, for our full coverage of Canada Night at Caesar’s Palace.

Without question, one of the most interesting aspects of the extravaganza—especially for those connected to Canadian collision repair community—was the number of products desperately seeking the support of north-of-the-border repair facilities. From cutting-edge panoramic security equipment offering real-time panoramic security footage of vehicles, to new digital tools to automatically alert emergency services to accidents, a whole range of new gadgets were on display that could only be installed at a bodyshop.

It wasn’t just Canada Night that had the Great White North a major topic of conversation in the Mojave. The strength of our auto market was noted by many companies. With the ink dried on the USMCA deal and solid economic forecasts coming from Ottawa, more business-oriented figures made repeated references to Canada as a land of automotive opportunity. That sentiment only seemed to gain in strength after the November 1 release of stronger-than-expected vehicle sales for Fiat Chrysler Canada, and Cellette’s announcement that Chief Automotive Distribution would now offer Celette’s full line of OEM-approved collision repair and measuring systems in the country.

Perhaps spurred on by the stream of economic glad tidings coming from Canada, many of the companies pitching their products were particularly eager to partner with Canadian collision repair facilities. Over-and-over-again, Canadians were told ‘This product, which is not yet offered in Canada, needs a bodyshop to perform the installation—why shouldn’t they be the ones to sell it as well!’

More information on some of these products and services will be found in Collision Repair’s next issue available in early December.

From full-scale lidar suites designed to be an aftermarket tool able to turn any car into an autonomous vehicle, to a prototype vehicle built as a proof-of-concept piece by Mississipi State University students, one thing was clear–the autonomous vehicle revolution is headed towards the aftermarket far faster than most industry insiders expected–lets just hope it has learned to brake properly! While many companies may have been prepared to show off some of their autonomous-related technologies, no company capitalized on the situation quite as effectively as the ride-hailing giant Lyft.

With more than 100,000 car enthusiast’s arriving in Las Vegas last week, the Uberesque transportation company Lyft seized the spotlight from its more famous competition. When guests eager to return to their hotels after the first day, those who used Lyft were greeted with a message asking them a simple question: “Would you be interested in an autonomous ride?”

As SEMA’s second day came to a close, it wasn’t just Lyft-loyalists who hailed their rides on the app, even hardened Uberites were giving it a go. According to one delegate lucky enough to be picked up by one of the two autonomous vehicles, the experience was a little diminished by the fact that the car had two safety operators ready to step in at a moment’s notice!

More an interview with one of the AV’s passengers, read through the next issue of Collision Repair,  available in early December.

Move aside low-VOC vs. waterborne paints–a new auto painting debate has taken centre stage: spectrophotometry tools or traditional paint matches–and if there is one thing that the SEMA Show made clear, it is that the debate is about to get very heated. The world’s largest automotive paint companies have very different approaches to colour matching. What these companies representatives did agree on was that colour matching is changing for three reasons: the consumers are demanding better matches, auto insurers are no longer paying for blending work to be done and OEMs are being less consistent with their own painting work.

To read our full report on the burgeoning colour matching controversy, and read about the positions taken by each major paint company, check out ‘Paint by Algorithm’ in Collision Repair’s February issue.