Report: ‘Efficient’ steel designs may be lighter than aluminum 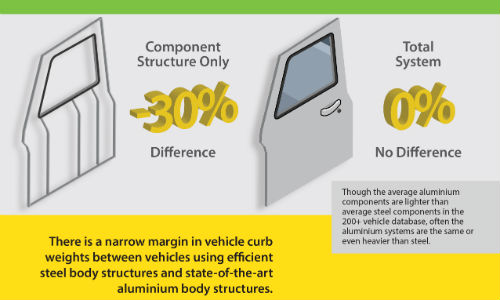 Toronto, Ontario — October 26, 2015 — The aluminum vs. steel debate continues to play out with a new study from WorldAutoSteel suggesting high-strength steel can lead to lighter parts than using aluminum.

Anyone who has watched an NFL broadcast recently will be aware of the debate, or at least how it’s played out via television commercials. GM continues to advertise its trucks as the “stronger” alternative to the aluminum body paneled Ford F-150. Ford counters with ads that explain the aluminum used is “military-grade” in the hopes that concerns about strength can be allayed. And the debate goes on, and on.

The latest bit of ammunition: this new report suggests that new types of lightweight steel can compete with aluminum on weight. In general, an aluminum part will bulk more than a steel part for the equivalent strength. It’s also usually more expensive than steel, even the high-strength varieties. Aluminum’s primary advantage comes from it’s relatively low weight.

According to the report some “efficient steel designs and materials are found to contain less mass than similar aluminum components.” That is, steel parts can be as light, or even lighter, than aluminum.

The study, “A New Paradigm for Automotive Mass Benchmarking,” comes up with the proprietary method for comparing the “efficiency” of various parts. The study looked at parts from over 200 cars. The results are perfectly counter to many existing assumptions.

The study was conducted by EDAG International and uses statistical regression analysis to isolate mass-efficient designs and compare lightweighting. A component structure that is identified as efficient is one that stands out statistically as much lighter than others of its kind of the same size, structural performance and material.

The study declares that when “aluminum closure components, such as doors, bumpers, hatchbacks, and decklids, are compared to efficient steel components of similar size, the 40 percent mass savings currently accepted as a standard measure of aluminum lightweighting capability is not nearly reached.”

The study also suggests that “while use of aluminum may achieve mass savings at the component level, that mass savings is lost when an entire system is measured.”

Steel’s high “efficiency” as illustrated in the report could be due to the use of high-strength steels, full optimized designs, or a combination of the two.

“While steel has come a long way, the study shows additional lightweighting can be achieved through design optimization and advanced steels and steel technologies,” said Broek. The debate is sure to go on.