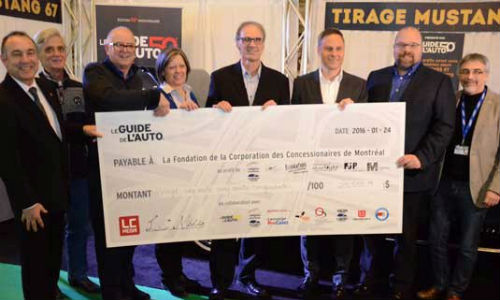 Laval, Quebec — February 7, 2016 — It isn’t enough to attract students to collision repair. Efforts need to be made to retain them as well. As one of the sponsors of Project Mustang, Carrossier ProColor has helped to donate $25,000 to organizations that work towards student retention or student aid.

The money was raised through a raffle held at the Montreal International Auto Show. The prize was a high-ticket item that attracted a lot of attention at the show: a restored 1967 Mustang. Many tickets were sold, but it was Denis Arpin, a resident of Blainville, Quebec, who received the grand prize on the final night of the auto show.

Carrossier ProColor was a partner of the 1967 Mustang Project. The project itself involved much more than simply raffling off the car. First, we need to get into a bit of background on the genesis of the project. The Guide de l’auto is Quebec’s highest selling annual publication, with approximately one guide sold for each five new cars sold in Quebec. The publication celebrates its 50th anniversary this year and to mark this occasion, the Guide acquired a convertible 1967 Mustang and launched the project of the same name.

The objective of the project was to completely restore the vehicle. However, it was not a professional restoration facility that was mandated to do the work, but a school. Specifically, the students of École des métiers de l’équipement motorisé were tasked with restoring the car to its former glory. Supervised by qualified instructors, the students completely dismantled, reassembled and refurbished the vehicle to showroom condition.

The project had another result, in addition to the car itself. It has enabled the creation of a new course in automotive restoration that was specifically designed around the 1967 Mustang project.

“Carrossier ProColor is extremely proud to be associated with this important project,” says Mary Jayn de Villers, Director of Communications and Marketing for the network. “It’s a very challenging and rewarding project for students. In addition, it helps promote career opportunities in the auto body industry.”

For more information on the project, please visit guideautoweb.com/essais-et-dossiers/voitures-anciennes/projet-mustang-1967.