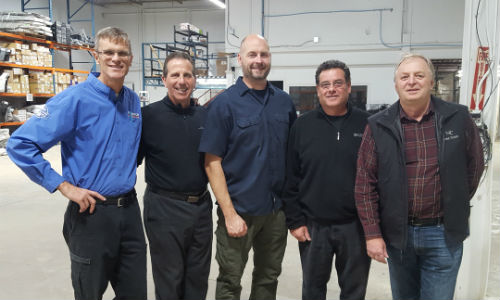 Dan Dominato of Precision Marketing and his team of sales representatives will introduce Polyvance’s line of nitrogen plastic welders and plastic refinishing products to paint and body distributors from Ontario to British Columbia.

Kurt Lammon, President of Polyvance, was in Toronto recently to train Dominato and his sales team on the proper use of the company’s nitrogen plastic welder. The training was conducted in Collision 360’s recently completed training centre.

Joining the training were Dan Bernier, who will represent the company’s products in Manitoba, and Tom Racz, who will cover Alberta. Brent Wingrove and Dan Dominato will represent Ontario. Quebec and Atlantic Canada are covered by Norm Proulx.

All sales reps received hands-on training directly from Lammon during the session. A statement from the company says all of the reps are capable of providing demonstrations and trainings at body shops across their territory.

Dominato foresees an increasing use of polypropylene plastics in future automobiles. Governments in both the US and Canada have set fuel-efficiency targets that OEMs must meet. While engine efficiency helps, it’s common knowledge that vehicles must shed a lot of weight to hit those targets. This means an increasing amount of aluminum, carbon fibre and plastic.

“We know polypropylene is going to play a huge role in the cars coming down the road, and the shop’s ability to repair those plastics will be extremely important,” says Dominato. “Fusion welding is going to be an important part of any plastic repair solution, and the products from Polyvance are just fantastic.”

“Polyvance pioneered nitrogen plastic welding in 2006, and now it’s the industry-preferred method for the repair of non-structural plastic parts such as bumper fascia and headlight tabs,” says Lammon. “It offers speed, strength and economy unsurpassed by any other repair technology. Nitrogen plastic welding is simply the most profitable way to repair non-structural plastic parts.”