The Nissan Titan’s legacy in Canada will come to an end in Canada because the automaker wishes to focus its resources on its core strengths. “The Nissan TITAN pickup truck will not be sold in Canada beyond model year 2021. We will focus our resources on existing core models in our crossover and sedan portfolios,” wrote Didier Marsaud, Nissan Canada’s director, of corporate communications in an email to Collision Repair. Despite efforts to refresh the Titan in the 2020 mannequin year, the pickup truck still struggled to compete in the full-size pickup truck market. Now, Nissan Canada is focusing on the mid-size pickup truck market, with its all-new Frontier, which according to Marsaud, will “arrive in Canadian showrooms next year.” 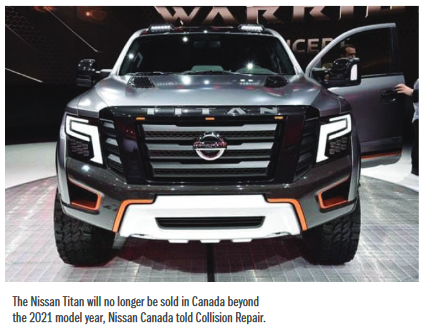 Kia Canada has introduced a bold, limited edition Stinger in neon orange to light up the road. This limited-edition Stinger is based on the 2021 Stinger GT Limited model and we be available this fall. To complement its vibrant exterior, the floor mats feature an orange contrast stitch detail to bring some of the outside inside Since its introduction in 2018, the Kia Stinger has won numerous awards around the world including the AJAC 2019 Car of the Year award in Canada. 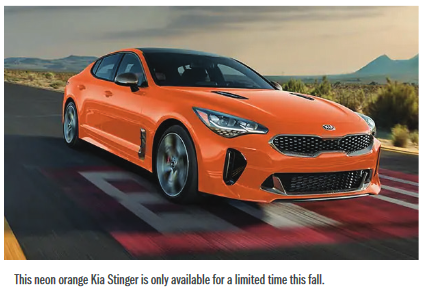 Ford of Canada and Unifor have reached a tentative agreement on a three-year national labour contract, which will see Ford retool the Oakville assembly plant to build five new electric vehicle models, Unifor president Jerry Dias announced Tuesday morning. The plant will also assemble batteries, adding 300 new jobs. The retooling will be made possible thanks to a $1.95 billion investment from the federal government, and the first model will roll off lines in 2025.

A new four-litre engine—to be used in Ford Mustangs and F-150—will also be built at the Windsor, Ontario engine plant, securing and potentially adding jobs at the plant, said Dias. “Today is a historic day. We are not only talking about solidifying the footprint of the auto industry in the short term, but for the long term. I think it’s fair to say that as an organization we hit a home run,” said Dias. 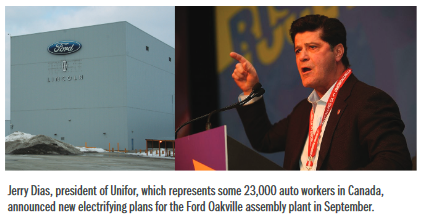 September 22nd saw Elon Musk, CEO of Tesla, announce a new battery system that will enable Tesla to launch a $25,000 electric vehicle. During Tesla’s much-anticipated Battery Day event, Musk said this new system–the “million-mile battery,” which won’t be in serious high production until 2022—will be produced in-house by Tesla with the use of larger cylindrical cells. The “million-dollar battery,” is not meant to run one million miles between recharges, the idea is to design batteries that can be swapped in and out to help with long hauls.

According to Musk, the new design of batteries, paired with in-house production will make Tesla batteries cheaper to produce. The new battery system will offer five times more energy and six times the power of the current battery pack used in the Model 3 and Model Y, said Musk. Despite the new battery announcement, Tesla will continue to buy batteries from suppliers including Panasonic, CATL and LG Chem, to meet its demands, but will start pilot production of the new battery at its factory in Fremont, California. Musk estimates it will take approximately one year to reach production capacity.

After nearly thirty years of continuous production, Honda has axed its Civic coupe. The model will no longer be sold after the 2020 model year. According to Honda Canada, buyers are increasingly gravitating toward the Civic Hatchback and Sedan. The automaker said it had seen a general decline in coupe sales across the industry, with sales of the Civic coupe falling to just three percent in Canada in 2019. Honda will also be discontinuing its Fit and Accord manual models at the end of the 2020 model year. Honda’s Civic coupe is part of a nameplate that has been the bestselling car in Canada for 22 years running. Although its sales dipped by 12.85 percent in 2019, the model still managed to hold its crown to be the bestselling vehicle overall. While the two-door titan contributes little to that total nowadays, it has been a big part of the Civic success story.

Researchers with the Department of Chemical Engineering and Health Services at the University of Waterloo (UW) welcomed the recent donation of a prototype for a PPE disinfecting machine, designed and built by engineers at Toyota Motor Manufacturing Canada (TMMC) in neighbouring Cambridge, Ontario. TMMC’s machine uses Ultraviolet C (UVC) light—an effective means of sterilizing PPE and other tools.

A reflective chamber is equipped with several UVC lamps. Contaminated items can be loaded into a portable, wheeled rack and rolled inside. Once the door is secured using special safety-rated latches, the machine exposes items to UVC light for approximately five minutes to disinfect them. TMMC engineers developed the machine in partnership with two area companies. Prescientx specializes in UVC technology for the medical industry, while JMP Solutions is a controls integrator with whom TMMC has enjoyed a long working relationship. 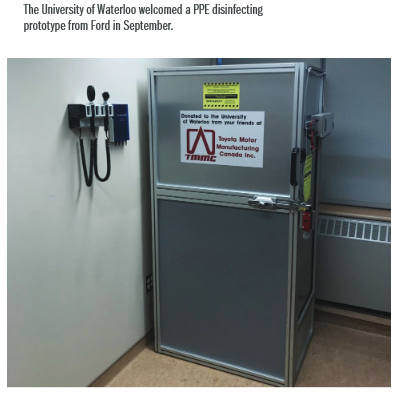 What Wood You Do: RCMP stop Alberta driver for driving with lumber out window