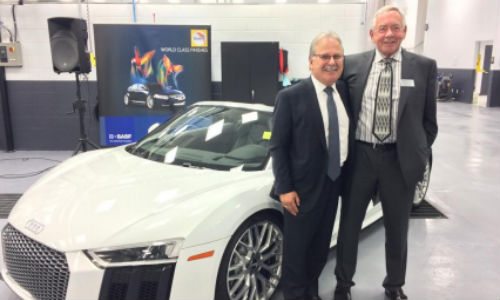 The new Distinctive Auto Works is located the corner of 115A and 156 St. NW in Edmonton. More than 150 guests were treated to live music, sparkling beverages, and cuisine prepared by noted Westin Hotels & Resorts Executive Chef Geoffrey Caswell-Murphy.

According to a statement from the company, the Edmonton facility is DAW’s largest and most luxurious yet. The facility is 27,000 sq. ft. and is equipped with the latest in paint booths, factory-certified repair benches and a computerized Naja laser measuring system from Celette. The facility also has anti-static pre-paint and heated nitrogen spray paint systems.

DAW Edmonton is the newest BMW Group Certified Collision Repair Centre (CCRC) in Edmonton. A statement from the company says certifications are in progress with Audi, Porsche, Land Rover, Jaguar and Lexus.

The first Distinctive Auto Works opened in Calgary in 2008 and is the only
Mercedes-Benz-certified collision repair centre in the city. The second opened in the Victoria suburb of Colwood in 2012, providing CCRC repairs to owners of BMW and Porsche vehicles.

“Opening Distinctive Auto Works was an evolutionary move for our company,” says Craftsman owner and founder Bill Hatswell. “The luxury brands, particularly European ones, are very particular about who gets to repair their vehicles, and in the case of Audi and BMW even mandate the use of their particular tools and techniques. Luckily we have the experience and the financial wherewithal to invest in their systems and training to earn their certifications. We want drivers of all vehicles, even the most elite and luxurious, to have access to the highest levels of service and repair quality. Opening DAW has made this possible, and the new Edmonton location is the jewel in the crown.”