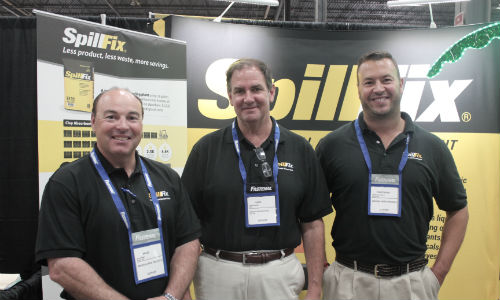 Kitchener, Waterloo — August 13, 2015 — Spills happen, even in the best run facilities. A newly released product won’t help prevent them, but it does promise to greatly help with clean-up in terms of cost, speed and disposal.

Spillfix is an organic absorbent manufactured from coconut coir, a fibre extracted from the coconut’s husk. It’s manufactured by Galuku Group and distributed in Canada by Fastenal.

In an interview with Collision Repair magazine, Galuku Group CEO David Roache referred to Spillfix as “the first innovation (in absorbent products) in 30 years.”

Clay-based substances are often used to clean up spilled oil and other hydrocarbons. However, Roache notes that his company’s products outperforms the traditional absorbent products in numerous areas.

“To clean up a 1 gallon spill, you’re looking at 23 lbs. of clay product versus 3.3 lbs of Spillfix,” he says. “That alone leads to lowered costs in terms of transport and disposal.”

“Using clay, you might have to let it sit for an hour before you sweep up. With Spillfix, it cleans up in minutes,” he says.

Collision Repair magazine was invited to watch a demo of the new product in comparison to a traditional clay product, and it does appear to outperform significantly.

Christopher Mudra of American Green Ventures performed the demonstration, noting while he did so that customers have even found that the product can be used more than once.

“We’ve had customers tell us that they’re keeping bins marked ‘new’ and ‘used,'” says Mudra. “The used Spillfix still has a lot of absorbency left, so it can be used on other spills.”

Bruce Baker is the Northeast Region’s Territory Sales Representative for American Green Ventures. He gave a vivid example of not only the product’s absorbency, but also its hydrophobic properties.

First, he poured water into a plastic cup, then topped it with transmission fluid. Next, he poured in a thin layer of Spillfix. The product is hydrophobic to such a degree that Baker was then able to pour the water from one cup to another, leaving the transmission
fluid and the Spillfix behind. While we wouldn’t want to risk drinking it, we can confirm that a visual inspection showed water that was perfectly clear.

“You can use it in the snow or in the rain, and there’s no leaching,” says Baker. “We also carry a smaller size that you could easily take on a tow truck. At 9 lbs., it’s enough to clean up three or four gallons.”

Spillfix is relatively new to the market, but a major company has already started using it. Recycling giant LKQ is an early adopt of the new product.

“When we first spoke to LKQ about 16 months ago, they were using 18 pallets of clay, per facility, per year,” says Roache. “We projected we could get that down to four or five pallets per facility per year. Because of the product’s reusability, LKQ is now averaging a bit more than three pallets per facility.”

For more information on Spillfix, please visit spillfix.com. Check out the the gallery below for shots of Spillfix in action.

Toronto, Ontario ⁠— As an essential business, SATA Canada remains open to supply products and services to all our customers⁠—and