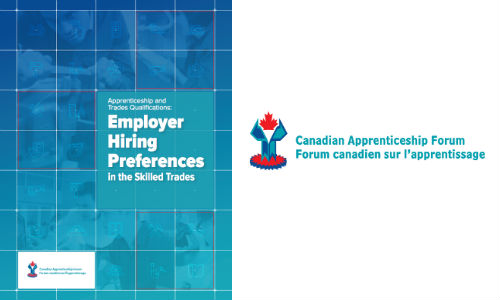 Toronto, Ontario — November 26, 2015 — One of the biggest issues in the collision repair industry has to do with labour. How do collision repair facilities attract and retain new talent? It seems fewer young kids than ever are taking up the trade. Owners worry whether they can find the talent to staff their shop. A new report from the Canadian Apprenticeship Forum (CAF) analyzes the state of apprenticeship in Canadian trades, including auto repair.

The CAF is an Ottawa-based group dedicated to issues around apprenticeships. Their most recent report surveyed over 500 employers to ask about the the way in which apprenticeships occur in their industry. Employers in the skilled trades were asked about how it is they implement apprenticeships and what kind of education and training they offered when recruiting new employees. The results are illuminating.

The survey was conducted in the provinces of British Columbia, Alberta, Ontario, New Brunswick, Newfoundland and Labrador, Nova Scotia, and Prince Edward Island. When asked about the reason employers hired journeypersons or apprentices, a majority said there was a new job opening up. The other 48.6 percent cited turnover as the reason for the new hire. Of all the apprentices hired last year, 17.6 per cent came from outside the province in which they were being hired. But over half of the employers (55.7 percent) who hired an apprentice from out-of-province experienced challenges. The suggestion, according to the report, is that employers experience mobility barriers. Among all “immigrant hires,” 59.1 percent were from another province and 29.5 per cent were from another country. Workers hired under the temporary foreign workers program made up 25 per cent of these immigrant hires.

A slight majority of employers (52 percent) indicated it was a common practice at their companies to hire helpers and labourers as apprentices. Half of employers (51.8 per cent) said it was “very important” and a quarter (25.2 per cent) said it was “somewhat important” to customers that journeypersons do the work. Although some parents still perceive the skilled trades as “dead-end jobs,” according to the report “the varied occupations pursued by journeypersons undermine this assumption.”

Prior work experience in potential apprentices was valued by 40.9 per cent of employers, who identified it as “very important.” When asked about college trades training, a higher percentage of employers said it was “somewhat important” (36.4 per cent) rather than “very important” (27.3 per cent). Only a small portion of employers thought these characteristics had “little importance.”

Among the respondents in the automotive trades, prior work experience was rated “very important” by 40.9 per cent of employers. When asked about college trades training, a higher percentage of these employers said it was “somewhat important” (36.4 per cent) rather than “very important” (27.3 per cent). Only a small portion of these employers thought these characteristics had “little importance.” When the results within the trade groups were broken down, employer preferences are higher for journeyperson status among automotive repair and maintenance employers (54 per cent).

The full report is available for free by registering with the Canadian Apprenticeship Forum at caf-fca.org.