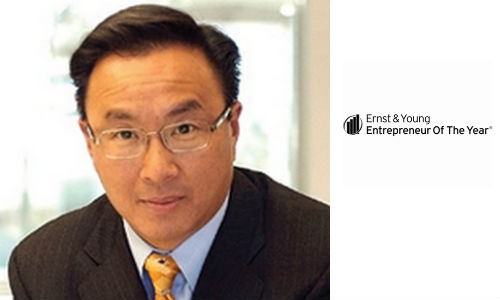 San Diego, California — May 12, 2016 — Mitchell International celebrates its 70th anniversary in 2016. Also this year, current Mitchell CEO Alex Sun has just been named the Ernst & Young Entrepreneur Of The Year in the company’s hometown of San Diego. It’s clearly an exciting time at the company.

The entrepreneur of the year award is a big deal. This is the 30th year the award has been granted and Sun has been selected as one of the regional semifinalists by a panel of independent judges. He will now be a finalist for the national award, considered the “world’s most prestigious business award for entrepreneurs.”

Ernst & Young released a case study detailing why Sun has been named Entrepreneur of the Year for San Diego. It’s an impressive list of accomplishments. Sun joined Mitchell International in 2001 at a time when the privately-held company had evolved from a “mom-and-pop” business to a supplier of estimating and communication products for claims in the collision repair. The business was generating $200 million annually and employed 500 people when Sun arrived.

Once installed as CEO, however, Sun started to execute his own corporate vision and began to expand the business beyond Auto Physical Damage (APD) into new Property and Casualty (P&C) markets as a way of growing revenue. Over the last seven years the company has chalked up an amazing 125 percent expansion in gross revenue, while successfully adding “a fully scaled and highly-competitive Casualty division in addition to its APD offering,” according to the case study from Ernst & Young.

The company is now considered a global attractor of top talent and capital. Mitchell has added over 2,000 full-time employees to its workforce and has expanded to Europe through strategic partnerships while solidifying its position as a top three market leader across auto physical, auto casualty and workers’ compensation divisions.

No wonder Sun has been named Entrepreneur of the Year for San Diego.

In a recent address, Sun talked about Mitchell’s growth and described how the story of the company’s founder continues to provide an excellent example of the importance of entrepreneurship.

The history of the company starts with Glenn Mitchell, working as the parts manager of a car dealership in post-war San Diego.

“Glenn Mitchell loved lists,” said Sun in his address. Mitchell saw an opportunity to turn this love of lists into a business. Mitchell “created extensive lists of automobile parts numbers, prices and descriptions to aid his parts counterman in looking up parts for body shops. Knowledge of these lists spread by word of mouth, Mitchell began receiving calls from other car dealers, body shop technicians and even insurance adjusters, requesting his specific and well-documented information,” according to Sun.

Eventually, Mitchell had his breakthrough insight that would lead to “the employment of thousands of people and made life easier and more productive for a countless number of our clients and partners … Glenn Mitchell realized that his informational lists were a valuable asset that could benefit the automotive industry on a large scale,” said Sun. “Mitchell used his technical knowledge, repair experience, and ability to connect pieces of information in order to simplify complex processes. In doing so, he created a better way of doing business that delivered better outcomes for his customers.”

In a recent interview with Collision Repair magazine, Sun was asked to comment on the significance of the anniversary.

“The 70th anniversary is a huge milestone for Mitchell. Seeing where we’ve come from when Glenn Mitchell first founded the company, where we’re currently at and where we’re heading is a very rewarding experience,” says Sun. “One thing that fills me with immense pride as we celebrate 70 years is our consistent and unwavering commitment to our customers and the ability to empower them to deliver better outcomes … our customers do very important work and we are absolutely passionate and committed to their purpose and individual business goals, and in the end, that’s what has fueled our success. The anniversary has me thinking about the future of Mitchell and its customers. Given the sheer amount of transformation that’s going on in the P&C industry, there has never been a greater need for technology that allows Mitchell’s customers’ business models to evolve and we’re excited to be a part of that.”

As a regional winner, Sun is in the pool to be tapped as the national winner of the Ernst & Young Entrepreneur of the Year Award. A short-list of finalists will be announced at the end of this month. The entrepreneur of the year award will be presented at a formal Awards Gala on Monday, June 20, at the Fairmont Grand Del Mar, California.