The rise of ADAS, our failure as an industry, the stakes involved, and how to change it

To put it another way, about 88 percent of ADAS calibrations are being missed. “We know two things: that ADAS calibrations should be a relatively common occurrence, and that right now, they’re not,” said the company. “The question is why.” In 2016, 20 major automakers pledged to include automatic emergency braking (AEB) as the standard by the 2022-23 model year. As of December 2020, half of those automakers have met that promise, with a further three standing at 90 percent of new models produced with AEB.

Further, OEMs are consistently working on incremental improvements as they aim to reach Level 2 through Level 4 technological applications, as well as developing additional ADAS ‘comfort’ features, like surround-view monitoring.

“The big picture: there are a huge number of vehicles on the road with ADAS right now,” wrote the company. “The collision industry is repairing a huge volume of vehicles that need to be recalibrated, but the industry isn’t fixing them. Over time, vehicles will get more complex, and ADAS calibration requirements will multiply.”

If Canadian collision repair centres fail to take initiative on performing proper advanced driver assistance system calibrations, there could be serious consequences not only for the business, but for the consumer. A mere degree of misalignment in ADAS sensors can result in total failure of the systems. What does a single degree of misalignment look like in the repair shop? The bracket for the front radar is about 10cm wide, which means that if one edge of the radar is allowed to protrude more than 0.8 mm past the other edge, it will be more than one degree misaligned. 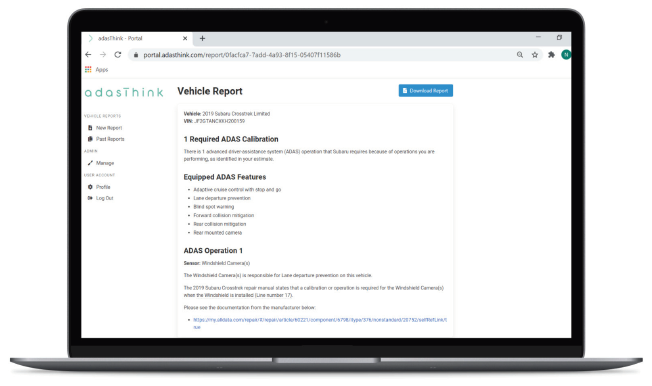 “Based on our data, the industry should be seeing an explosion in ADAS calibrations. Unfortunately, that’s not at all what’s happening, because bodyshops are missing most of them.”

“When it comes to ADAS calibrations, access to proper procedures and ample knowledge of the systems goes a long way. Every manufacturer has different names for their sensors—there are 19 different names for blind spot, according to AAA— and each one puts them in a different place in their service manual. Depending on the OEM, an estimator may need to look in the service precautions section, the bumper removal/replacement section, the blind spot sensor removal/replacement section, or the calibration procedure,” said adasThink.

“In the vast majority of cases, there will be no light on the dash. There will be no fault codes. And your estimating system will almost never tell you what you need to do.” The adasThink whitepaper is available for download at adasthink.com/insights/. 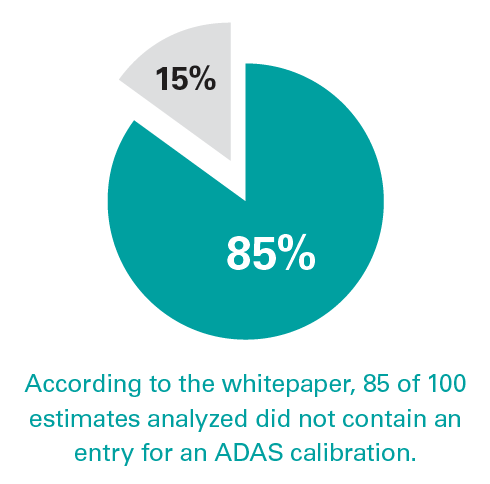