Global auto production continued to increase in first half of 2016 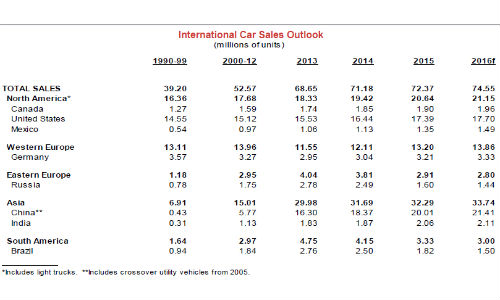 Toronto, Ontario — July 4, 2016 — The automotive industry is still doing a bang-up business from the global perspective. Worldwide car sales posted another solid advance, climbing 4 percent over the same period in 2016 and continuing the string of strong gains since last September. Western Europe and China led the way, with both regions posting double-digit advances in May, but North America is apparently poised to lead the way throughout the summer.
While the economic and sales outlook has become more uncertain in the aftermath of the recent UK referendum, volumes across Western Europe have advanced a stronger than expected 9 percent. This is the largest increase in that market in nearly two decades. The improvement reflects increased replacement demand and a strengthening labour market, which will continue to buoy sales even as activity begins to falter in the UK.
“Rising sales will lift vehicle production across most of the world in the second half of 2016, providing a welcome boost to industrial activity,” says Carlos Gomes, Senior Economist and Auto Industry Specialist at Scotiabank. “This comes at a time when heightened economic and political uncertainty is dampening overall economic growth.”
North America assemblies in the July-September period are scheduled to post the largest quarter-to-quarter increase in more than two years. However, assemblies are also moving higher across Asia and Europe, supporting manufacturing activity which has staggered into the summer.
While North American vehicle production and overall industrial activity has been sluggish in recent months, factory floors are expected to become busier during the summer, with a record number of vehicles scheduled to be built during the July-September period. Estimates from Scotiabank predict the annualized production rate in Canada, the United States and Mexico will climb to 18.9 million units during the summer, up from 17.9 million between January and May.
Rising vehicle production is expected to add half of a percentage point to economic growth in the US in the third quarter, the largest increase in more than a year. The impact will be even greater in Mexico, with third-quarter assemblies scheduled to jump 5 percent above a year earlier. The sharp gain reflects the inauguration of a new facility in Nuevo Leon, and the restart of an assembly plant in Tolluca, following several months of retooling.
New orders for vehicles from assembly plants in Germany and Spain recently jumped to the highest level in more than five years.
Passenger vehicle sales in China have outpaced production gains this year, enabling automakers to reduce inventories to only 1.4 months’ at the end of May, down from 1.7 months’ a year ago and a peak of nearly 2 months’ in early 2015. Sales have also gained momentum in the rest of Asia, with volumes excluding China, advancing in May at the fastest pace since late 2015.
For more information, please see Scotiabank’s Global Auto Report, available at this link.