Friday Fun: Hagfish on the highway lead to disgusting accident 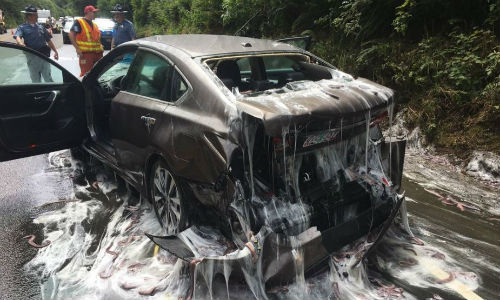 Toronto, Ontario — July 20, 2017 — In this week’s edition of Friday Fun we look into what is possibly the most disgusting car accident ever recorded, road rage on the streets of Toronto, the case of a burglar who broke into a bodyshop before breaking out again and much, much more!

– Collisions are often tragic. This one was just gross. An unfortunate driver’s car ended up covered in almost 7,500 pounds of slimy eel-like creatures called hagfish. According to a report by Oregon’s KATU TV, “The driver tried to stop for construction but didn’t quite do it … 13 containers with the live fish inside came off the truck.” One of the boxes smashed the windshield of the car behind, trapping two people inside. Rescuers arrived at a scene, which was covered in slime. According to the driver, “The firemen had to practically carry us off the road, because it was so slick. It was worse than ice.”

According to the story the car was taken to an autobody shop to be repaired. Workers hosed the car down and found one of the slimy eels in the bumper, swimming around in a small pool of trapped water.

– An Indianapolis shop providing body and paint service for large vehicles suffered an odd security breach last week. The crime started around 5 p.m., when a surveillance camera caught a thief casing the parking lot, looking for parts to steal. The man stole a couple of catalytic converters, broke into a large passenger van and loaded the cats into the van. The thief then started driving the stolen van around the lot looking for a way out.

“I don’t think he thought the gate was going to be locked,” the owner of the shop was quoted as saying by the local CBS affiliate. According to the story, “For several minutes, the suspect can be seen driving the van and walking to different areas of the lot, apparently realizing he was locked inside the property. Eventually, the van can be seen moving around toward the front of the business, where the suspect smashed the van through the front gate to make his escape.” The owner was quoted as saying, “We hope the scrap yards will do the right thing and not let these guys turn them in.”

– The Ontario Liberal party has clearly given up trying to achieve its election promise to reduce auto insurance by 15 percent, as auto insurance rates in Ontario rose again in the second quarter of 2017. According to a report by the Toronto Star, “Approved rates posted by the Financial Services Commission of Ontario show an average increase of 0.76 per cent … Last quarter, rates went up by an average of 1.24 per cent.”

– A Florida man recently had his car stolen from the parking lot outside his apartment building. Luckily he had a GPS-based tracking device hidden under the car’s carpet. He began following the signals sent out by the device … and found his car at a chop shop. When police raided the operation they arrested three people, including one person who had posted bond to get out of jail just hours earlier. It was too late for the car however. The thieves had already removed the engine and parts.

– An extreme case of road rage was captured on video in Toronto Monday night. According to a CP24 report one person was injured and two vehicles were damaged following the incident. A witness said they saw a car come to a stop behind a pickup truck. There must have been an incident just previous as, “Three people jumped out of the vehicle right away and started screaming at the truck. They surrounded the vehicle and one of the individuals ran into the passenger door of the truck, hitting it with his knee and trying to hit it with his arm.” The group also threw a rock at the passenger side of the truck. Then, according to the report, “When the occupants of the car got back into the vehicle and attempted to make a U-turn, the witness said the driver of the pickup truck t-boned the vehicle … A passenger in the truck sustained minor injuries following the collision and the car took off.”

– A report from New Zealand details a failed attempt by a moped rider to create a fraudulent insurance claim. Dashcam footage from the car shows the fraudster dismounting from the bike and then deliberately pushing it into the car before throwing his body onto the windshield. According to the report, “An accomplice then emerges from a neighbouring house filming the aftermath of the incident, presumably so it can be used to help prove the moped rider’s version of events.” But the driver of the car—knowing the scene is on the dash cam–got out of the car and began yelling at the two criminals, “Oh my God! What the hell are you doing? … You’re mad, you’re absolutely mad. I’ve got a camera. Do you understand you’re on video, you complete idiot?” The two then try to cover their faces and flee the scene. The report notes that the Association of British Insurers estimates there are, “… approximately 2,500 fake insurance claims filed each week in the UK.”

– Vintage auto insurer Hagerty has announced that it will be the “official insurer” of the 2018 Dodge Challenger SRT Demon, according to a report by Insurance Business. The supercar is considered one of the most powerful street-legal cars ever produced. Hagerty will provide coverage to about 300 Demon owners in Canada. The new car arrives at dealerships this fall. The CEO of Hagerty is quoted as saying, “We are living in the golden age of automotive performance, and the Demon is the latest example that speaks directly to the hearts of enthusiasts. The insurance industry had a hand in ending the first great muscle car era, and we’re here to make sure history doesn’t repeat itself.”

– A major car rental company in Europe has been found to be overcharging clients for vehicle repairs. Europcar is one Europe’s biggest rental companies. The Serious Fraud Office in the UK is now said to be, “… planning a criminal inquiry following reports that more than 500,000 customers may have paid for repairs inflated by up to 300 per cent,” according to a report by the Daily Mail. A newspaper investigation found customers, “… were being forced to pay up to £2,200 in insurance ‘excess’ if they damage a hire car abroad.” Typically when a rental is damaged the driver pays a deductible—known as the excess in the UK–while the rest is covered by insurance. According to the story, “… excess charges were spiraling ‘out of control’ as car rental desks use the high prices to persuade drivers to buy additional ‘excess waiver’ coverage.” According to the report, The National Body Repair Association said the problem was, “… widespread and warned of ‘an increasing trend towards large corporates pressuring small firms to work with opaque practices and poor commercial terms.’” Deductibles (the excess) have risen to £2,000 in some cases.