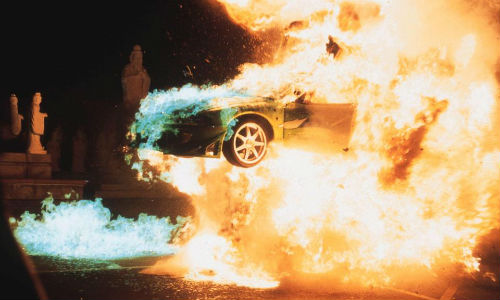 Toronto, Ontario — April 6, 2016 — This week’s Friday Fun looks at how a small corner of Quebec’s cottage country become the electric car capital of Canada, why techs in BC are finding rats in newer cars, auto industry legend Bob Lutz’s no-holds barred take on Elon Musk and much, much more!

– The eighth installment of the Fast and the Furious movie franchise arrives in theatres soon. As part of the promotion, the UK’s The Sun newspaper (with help from an insurance company) totalled up the cost of all the crashes in the movies to this point. The total damage: £420 million, or, about $702 million Canadian dollars. That’s a lot of write-offs.

Over 300 vehicles have been destroyed in the filming of the last seven instalments. According to the story, “The most recent film, Furious 7, managed to take the cake as the most destructive, as almost 100 items met their demise during the two and a half hours of screen time … Furious 7 also saw the franchise’s most expensive vehicle reduced to rubble: the £2,700.000 Lykan Hypersport …”

– The Ontario Provincial Police are dealing with what seems to be a real life scene from one of the Fast and the Furious movies. Police said this week they expect to lay more charges in a recent case of stunt driving on expressways that saw up to 50 high-end vehicles pulled over. Twelve of the drivers involved were part of an “extreme car enthusiast club” called “North Face Rally.” A lawyer for the group is quoted as saying the claims about dangerous driving are overblown and that his clients were treated “aggressively” by police.

A report by CTV also pointed out that, “One white Lamborghini was decked out in a Royal Canadian Air Force decal, another on the driver-side window read ‘Let me guess, license and registration?’ … As many as 50 of the fastest sports cars money can buy were pulled over by police on a major southern Ontario highway Sunday after other motorists phoned in complaints, leading to 12 stunt driving charges … The collection of pricey cars, some of which were hauled away on tow trucks, included Ferraris, Porsches and AMG Mercedes.” A police officer involved in the situation said that witnesses driving up the 400 and 407 highways said they, “… were being swarmed by these vehicles, taking up the lanes and really intimidating traffic on the highway.” Eventually, “Several Ontario Provincial Police detachments co-ordinated roadblocks on Highway 400 near Barrie, Ont., lying in wait to force the convoy to pull over at a service station. Those who were charged face seven-day driving suspensions and a minimum $2,000 fine … Rather than doing a full traffic stop on the 400, the OPP decided to do a rolling block and funnel the vehicles into the ONroute in Barrie.”

– The Ontario town of Innisfil will become the first community in Canada to partner with Uber to provide public transportation around town, according to a report by CTV. Innisfil is a town of about 36,000 people north of Toronto. Rather than pay for a bus service it is, “… teaming up with the ridesharing service to cover all of its public transit needs … The municipal government is subsidizing rides in the small community, so riders will only pay an average of $3 to get a lift through Uber Pool.”

– A television news report from BC finds that eco-friendly wires used in some cars now are attractive to rats. Apparently the wires use soy. A family mentioned in the television news segment have had two cars left disabled after animals chewed the eco-wires. John Sinkie, a tech with Budget Brake & Muffler, told reporters that “… one in five vehicles he sees now has some sign of a rodent under the intake manifold.” ICBC will cover the repair without penalty in most cases. The report also noted that, “Mechanics recommend parking your car inside and wrapping wires in rat-proof tape. Dryer sheets can be an effective deterrent thanks to their strong scent…If you’re looking for something more potent, predator urine can also work wonders…Many hardware stores sell coyote urine,” according to the story. You can check out the report in the player below.

– Auto industry legend and former Vice Chair of GM Bob Lutz gave an interview to the Los Angeles Times this week and held nothing back. Lutz is famously outspoken and was so in the recent interview:

When asked for his take on Elon Musk and Tesla, Lutz said, “I don’t know why it is that otherwise intelligent people can’t see what’s going on there. They lose money on every car, they have a constant cash drain, and yet everybody talks as if this is the most miraculous automobile company of all time … (Musk) has no technology that’s not available to anybody else. It’s lithium-ion cobalt batteries. Every carmaker on the planet has electric vehicles in the works with a 200- to 300-mile range … Raising capital is not going to help, because fundamentally the business equation on electric cars is wrong. They cost more to build than what the public is willing to pay. That’s the bottom line.”

When asked if he wasn’t impressed by the design of the Tesla, Lutz said, “The one advantage (Musk) has is that the Model S is a gorgeous car. It’s one of the best-looking full-size sedans ever. The Model X? It looks like a loaf of bread.”

Interestingly, Lutz is actually bullish on autonomous cars: “As much as one side of me deplores it because I love to drive, when you look at the skills of the average driver, and the reaction times, and the incidence of alcohol and drug use as a factor in accidents, and the amount of national productive time that’s wasted in traffic jams, it is time to find a different solution.”

When asked what someone who loves driving can do he said, “They will have to go to private racetracks. They’re springing up like golf courses. Those will be nice because they’ll be unfettered by regulations, since they’re not on public highways, and they will be the equivalent of riding stables and dude ranches now.”

– A story in a Quebec newspaper notes that, “A small corner of Quebec cottage country has quietly become the electric car capital of Canada, driven in part by the unlikely success of a small-town dealership.” The report goes on to tell the take of the region of Lanaudière north of Montreal, which “has the highest per capita electric car ownership in Quebec, according to the provincial electric vehicle association.” Interestingly, “Quebec accounted for nearly half of all of Canada’s electric car sales last year,” according to the story. What makes Quebec such fertile ground for electric cars?

According to the report, “Electricity is relatively cheap due to abundant hydropower. The provincial government offers sales rebates and recently passed the country’s only legislation requiring automakers to sell a minimum number of electric, plug-in hybrid and hydrogen fuel-cell vehicles for the 2018 model year. And many residents pride themselves on their environmental sensibility … But the leading position of Lanaudiere is also due to Bourgeois Chevrolet in the small town of Rawdon, which industry experts say sells more electric cars than any other traditional dealership in Canada … Co-owner Hugo Jeanson says the dealership’s decision a few years ago to focus on electric cars as a way to grow the business attracted a following, with customers coming from as far away as New Brunswick and British Columbia. Nearly half of Bourgeois’s car sales are now electric vehicles.” The story notes as well that, “Jeanson credits the dealership’s success to having many models on the lot, training staff about electric cars, paying them salaries instead of commissions and letting prospective customers test-drive the cars for several days. The dealership has also donated chargers to local businesses, helping to encourage demand.”