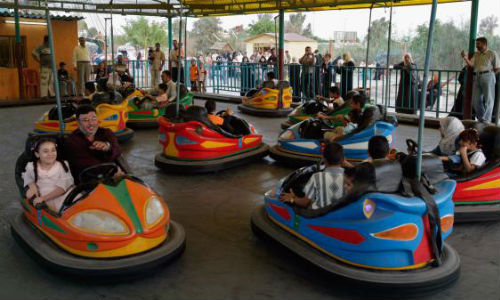 Toronto, Ontario — December 22, 2016 — It’s time for another edition of Friday Fun, just in time for the holidays! This week we look at some of the naughty and nice news from around the industry, including the current popularity of high-end pick-up trucks, how a new directive in the European Union means bumper cars need insurance, a Toronto shop uses its sign to spread cheer and much, much more!

– Americans are buying more big pick-up trucks than ever, according to a report in the Detroit Free Press: “Driven by cheap fuel, a surging economy and a rising stock market, more buyers are willing to pay as much for a richly appointed truck as they would a fancy Mercedes-Benz or Lexus sedan,” according to the report. “The latest evidence of the luxe-truck phenomenon comes from Ford, which says that 71% of buyers in November opted for the higher grades of its new Super Duty heavy-duty pickup. Those trucks range from the F-250 Lariat with a starting price of $45,105 up to the F-250 King Ranch at $54,260 – and prices can go a lot higher when options are added.”

The story goes on to note that, “General Motors, with deluxe pickups in its Chevrolet and GMC division, and Fiat Chrysler, with its Ram pickups, say they’ve also seen strong buyer response to their highest end pickups…America’s love affair with pickups is still largely a domestic phenomenon, with Detroit’s Big 3 holding big sales leads. The Ford F-Series pickup was the most popular new vehicle of any kind sold in the first 11 months of the year, as it always has been in the past. The Chevrolet Silverado follows in second and Fiat-Chrysler Ram 1500 is third. It isn’t until fourth place that a car shows up, the Toyota Camry, according to Autodata.” The article goes on to note that, “…the high-end pickup trend is significant because both light and heavy-duty trucks are among the most profitable vehicles on a dealer’s lot. They are generally less complex to make than cars, which adds to their profitability. And sales of them have done well all year.

– The OEMs this past week announced that several assembly plants would be idled as the carmakers deal with, “near-record high inventories amid weakening sales.” According to a report on Zero Hedge: “With an inventories-to-sales ratio above historical peaks … the pain for automakers has only just begun.” Many seem to think the current record sales levels will not continue. “… GM’s inventory of vehicles on dealer lots at the end of November stood at 874,162, up 26.5% from the same time a year ago,” according to a report from the Associated Press. “General Motors will temporarily close five factories next month as it tries to reduce a growing inventory of cars on dealer lots … The factories will close anywhere from one to three weeks due to the ongoing U.S. market shift toward trucks and SUVs … Just over 10,000 workers will be idled.”

As well, “Fiat Chrysler said it is adding four off days to the Jan. 2 observation of New Year’s at its minivan assembly plant in Windsor, Ontario, and its large-car facility in Brampton, Ontario … The automaker has already stopped making the Dodge Dart and Chrysler 200 sedans.”

– A story by CBC’s Nova Scotia outlet notes that car thieves are targeting cars of a certain vintage. According to a story quoting statistics from the Insurance Bureau of Canada (IBC), “… seven of the 10 most stolen cars in 2015 were more than 10 years old …” The list of stolen vehicles is compiled from insurance claims data collected from nearly all automobile insurance companies in the country. In 2015, 930 vehicles were stolen in Nova Scotia according to the director of auto theft and vehicle services in the Atlantic region for IBC. “New cars are worth more money to thieves but they’re also higher-risk … There are a few reasons why car thieves desire more elderly vehicles. Generally speaking, any car built before 2008 is easier to steal. There’s also a demand for older car parts …”

– The Ottawa Citizen told the story of a woman who thought she was buying a new Corvette. When the car was in a minor accident and had to go to a shop to be repaired, the technician removed the bumper and found body filler on the inside. The technician called the owner and asked what she knew about an earlier accident. The owner knew nothing. “Eventually, in preparation for a compensation claim, an auto body expert was hired to do an assessment. He found structural damage, too, indicated by a cracked shock absorber hidden by the bumper. The estimate for a proper repair was $3,469 …,” according to the story in the Ottawa Citizen. The Corvette’s owner turned to a paralegal and eventually took the case to court, claiming, “… breach of contract and seeking $25,000 in damages … The dealership, meanwhile, admitted the car had sustained minor damage and was sent for cosmetic repairs that cost $751.” According to the story, the judge, “… was not satisfied the repair was done properly. It also claimed it was legally entitled under the Motor Vehicle Dealers Act to sell as ‘new’ any car that suffers minor damage prior to the sale … How much damage? Anything below $2,000, the dealer testified … Deputy Judge Ivan Whitehall elaborated. The act actually puts the figure at $3,000 but says there is a duty of disclosure to the buyer, with a statement detailing the damage and the repair costs.” The buyer had, “…received neither, nor was it her responsibility to ask.” Long story short, the judge awarded the Corvette’s owner almost $9,000 in damages.

– Elecktrek reports that new data shows that, “… auto companies and auto dealers are focusing much less on electric vehicle (EV) advertising than on advertising for conventional,” cars and trucks. According to the data, “Ford advertised its gasoline-powered Focus in about 4,750 instances on cable and broadcast TV to national audiences, whereas it only advertised its Focus Electric in about 200 instances to a national TV audience. That’s nearly 24 times more non-EV ad instances … Similarly, Mercedes advertised its C-Class gas guzzler in about 1,400 instances on national TV, whereas it didn’t advertise its B-Class electric vehicle at all to a national TV audience.”

– A report in the Milwaukee Journal Sentinel says that overall, in terms of sales, the auto industry is coming off what may turn out to be the best, “… back-to-back sales years ever,” but as 2017 dawns, “… the U.S. automotive business appears to be easing off the accelerator a bit…”. According to the report this may mean that the OEMs are about to start offering major rebates. “’The bottom line is sales (rates) are still pretty high, but they are plateauing and it is taking more effort in terms of promotion and incentives to keep sales higher. And we expect that will be more of the same next year,’ said Michele Krebs, senior analyst for automotive website Autotrader.”

– Cars need insurance, right? Do bumper cars? Regulators in the European Union seem to think so. They’ve found it necessary to require operators of carnival rides to buy insurance for fairground, “… dodgems and children’s [bumper] cars …”. According to a story in the UK paper The Times, “Full insurance could be required for all ‘vehicles’, including those that never leave private land, to comply with a new EU directive. A range of vehicles that are exempt from insurance, including mobility scooters, golf buggies, ride-on lawnmowers and Segway personal transporters, are likely to be affected … The directive also casts doubt over the statutory off-road notification scheme that allows motorists to keep uninsured cars on driveways, the government admitted … The Department for Transport said it was legally obliged to consult on the changes despite being uncomfortable about the reforms, which would have ‘potentially costly consequences.’”

– Volvo announced this week it has reintroduced its “LifePaint safety spray.” The paint is a reflective spray that adds a reflective coating to clothes and bike equipment. Invisible during the day, the spray, “… reacts to a vehicle’s headlights at night … Once it is hit by headlights the spray reflects light in the same direction as the light source, helping to alert drivers to a cyclist’s presence and increase visibility and safety in the dark.” Check out the video from Volvo in the player below:

– The Globe and Mail reported this week that Canadian owners of VWs affected by that company’s emissions scandal will be able to take advantage of a settlement that will see, Volkswagen “… offer to buy back 20,000 of the vehicles deemed difficult to bring into compliance with environmental regulations.” The settlement is likely to add another $1 billion to Volkswagen’s diesel-related tab.

– The CBC reports on some new roadside drug testing devices: “Toronto police say they plan…to begin testing two types of roadside screening devices that are designed to detect the recent presence of certain drugs in motorists.” According a newspaper report, “The testing is part of a pilot project on drug impaired driving that runs until the spring of 2017 and it will test how well officers are able to use the devices on drivers under different weather conditions … No charges will be laid in the project, even if drivers and passengers test positive for drugs, Toronto police said in a news release on Monday.”

“The devices selected for use in this project are the Alere DDS and the Securetec DrugWipe 5S … [The devices] can detect presence of pot, coke, meth … Police said the project will document the experience of officers participating in the project and help to develop procedures and practices on the use of what are called oral fluid screening devices in Canada.”

– An auto repair shop in Toronto’s west end is getting community praise for how it’s using its personal billboard space, according to a report from CityNews. Instead of the usual sales pitch, Master Mechanic High Park used, “… its store front sign to display messages to anyone who may need some encouragement,” according to the report. “Sometimes you hear stuff and it’s constantly negative, you just want to bring back the positive and pay it forward,” said Josie Candito, owner of the shop at Dundas Street and Howard Park Avenue. “For the last three years, Master Mechanic High Park has displayed encouraging messages, everything from spreading love and positivity to paying tribute to beloved pets. ‘I have people who have emailed me who said they’ve been having such a terrible day, crying and it’s made their day’,” said Cardito to a local news reporter. ‘It warms my heart to know that I can do something to make things better.’”