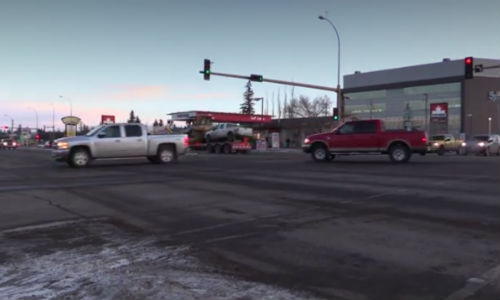 Toronto, Ontario — January 5, 2017 — The first week of the new year brought with it higher gas prices, bad weather, a collision between a collision repair centre and a big rig and much, much more!

– The local newspaper in Greenville, South Carolina reports that a truck driver claims his brakes stopped working just before his tractor-trailer crashed into 10 vehicles and smashed through the front of a repair facility. According to the report, “The driver said he tried to go in between the cars to avoid a rear-end collision but instead struck both cars and then continued on into oncoming lanes of travel…the truck set off a chain reaction as vehicles were pushed into other vehicles from the truck’s momentum.” The truck then crashed through the front of the shop, struck a tenth vehicle, and fell through the floor of the garage into the basement of the building.

– Repairer Driven News reports that “Chubb, the world’s largest property-casualty insurer, has told U.S. estimators that it will pay for pre- and post-repair scans on all vehicles dating back to 1990.” Collision Repair magazine reached out to Chubb’s Canadian arm to see if they’ll back this as well, but no response had been received as of time of publication.

– The first work week of the new year saw drivers in Ontario and Alberta complaining about a large jump in fuel prices. In both provinces new carbon emission mediation strategies came into force. The overall effect was to push gasoline prices up by 4.3 cents/litre in Ontario and 4.5 cents/litre in Alberta.

“At some gas stations in Toronto and Calgary, prices went up more than five cents a litre overnight on Saturday,” according to a report on CP24. The story goes on to note that, “… petroleum analyst says Canadians can expect gas and other energy products to be ‘far more expensive’ in 2017 — and not only because of new carbon pricing …” In the coming year OPEC is expected to restrict supply to combat falling revenues in oil producing countries. The price of gasoline could revisit summer 2014 levels, when the average retail price passed $1.40 a litre. Nationally, “… prices rose 2.4 cents over the past week from 112.0/litre to 114.4/litre,” according to the report.

– The Edmonton Journal reports that in Lloydminster, which straddles the Saskatchewan and Alberta border, “On the western side of the street, the area code is 780 and gasoline is now subject to a per-litre 4.49-cent carbon charge. On the other, 306 prefixes phone numbers and the government remains staunchly opposed to any such tax.” The new gasoline tax prompted provincial residents to rally across the province in 2016 according to the report. “Opponents say the $20-per-tonne carbon price will do little to change global emissions and further damage Alberta’s fragile economy, which is just beginning a shaky recovery from the oil price crash … In Lloydminster, consumer willingness to drive a ways to find price savings has Alberta-side gas stations worried about plummeting sales …”

– It could have been worse. In Mexico a government-mandated 20 percent increase in the price of gasoline set off nationwide protests. According to a story in the UK’s Daily Mail, “Looting and riots erupted,” after the price of gasoline was deregulated over the weekend by President Enrique Pena Nieto. “Bus, taxi, and truck drivers have been hit the hardest … A gallon of gas can now cost almost a day’s pay for the average worker, or several days pay to fill a tank.” Democratic Revolution Party leader Jesus Zambrano urged a “peaceful revolution” after gas prices surged by 14 to 20 percent as the deregulation policy took effect on New Year’s Day.

– Trump is already off and running on his Buy American platform. This past week the president-elect began to challenge the auto industry on its offshore manufacturing. Ford cancelled plans for a new US$1.6-billion plant in Mexico just hours after Trump tweeted at the company and threatened a 35 percent tax. Instead Ford said it would invest $700 million in an expansion of its facility in Flat Rock, Michigan, according to reports. A story in The Windsor Star quoted the President and CEO of the Windsor-Essex Regional Chamber of Commerce as saying, “It’s clear Trump is going to make the auto sector a priority, retaining and growing jobs in the U.S … So, we are going to have to develop a strategy that is appropriately matched with the goals and objectives of the incoming U.S. administration … The best way to shield Canada from any negative fallout from a Trump administration is to reinforce the case that Ontario and the Great Lakes states are part of the same automotive cluster … That’s where we have to join forces. The best strategy is to show we are one.” Aware of the irritants that could erupt in 2017, “… the Canadian government has already begun reaching out to potential U.S. allies to bolster its public advocacy on some of these issues including Buy American,” according to the report.

– Ford was quick to follow-up its statement with a claim that it really wasn’t Trump’s tweet that got the company to change in plans. According to Ford, “[T]he reason we are canceling our plant in Mexico, the main reason, is because we are seeing a decline in demand for small vehicles here in North America … So as a company, we are always looking at our capacity and asking ourselves where can we fully utilize it.”

– Later in the week Trump went after Toyota. A report noted that if the company, “… builds Corolla cars destined for the U.S. market at a factory in Mexico,” then Trump would enforce another border tax. “Toyota Motor said will build a new plant in Baja, Mexico, to build Corolla cars for U.S. NO WAY! Build plant in U.S. or pay big border tax,” wrote Trump on Twitter. “The Japanese automaker’s shares immediately dipped after Mr. Trump’s tweet,” according to the report.

– A year-end review type of article that ran on Auto Body Repair News asked American collision repair executives what they saw in the future. Typical predictions included continuing consolidation. One prediction was that one of the “… larger MSOs will agree to purchase one of the other large MSOs.”

As well, OEMs will be added to the, “… list of those with position statements on pre- and post-repair vehicle scanning of diagnostic trouble codes, and severity and the percentage of vehicles declared total losses will increase as a result.”

The executive went on to predict that in California the, “Bureau of Automotive Repair may talk about certifying technicians or estimators as they change or add additional guidelines as a result of vehicle scanning.” Another executive predicted that, “We will see the OEMs influencing the industry more and more as they perfect their network programs. Included in this will be a growing focus on learning – not just training as a series of required events, but a more comprehensive educational requirement. These requirements also will include proving knowledge and skills in areas where occupant safety and vehicle reliability are concerned. Repairers also will begin to look for new ways to increase their competitive advantage over their well-trained competitors. In 2017, there will be an increased awareness on the need to train customer-facing employees, whose knowledge and skills development have been traditionally ignored or assumed.”

– Last year was a record year for car sales. According to one report, “Canadians and Americans wore out the showroom floors of car dealerships in 2016, driving auto makers to record sales years in both markets … Auto makers sold 1.95 million vehicles in Canada, the fourth consecutive year that sales have hit a record. The 2016 level was achieved despite a plunge in oil prices that sent sales tumbling in Alberta, the third largest market in the country… The U.S. market hit a record 17.539 million, a fraction higher than the 2015 level … [even better] for auto makers … is that from the current peak, industry analysts expect any decline on the horizon is likely to be modest … Dennis DesRosiers, President of DesRosiers Automotive Consultants, is forecasting a dip back below 1.9 million vehicles in 2017, but acknowledges that if the stars align, deliveries could hit two million vehicles this year.” Higher interest rates could, “… put the brakes on the market.” But DesRosiers was not predicting a “free fall” situation as the “… fundamentals are quite strong.” The relatively older age of the vehicle fleet was also cited as a reason sales could be expected to stay strong in 2017.

– Also in the data: “The shift in consumer tastes away from passenger cars and toward trucks and crossover utility vehicles – a major structural change that is affecting investment decisions in Mexico and elsewhere and jobs at U.S. factories – continued in 2016,” according to a story in The Globe & Mail. “Sales of Ford’s F-series pickup truck surpassed sales of its entire passenger car lineup….Ford Motor Co. of Canada Ltd. sold three times as many F-series pickups as cars….In Canada, crossovers, pickups and traditional sport utility vehicles grabbed a record 70 per cent of the market in December…Ford Canada captured first place in the Canadian sales race in 2016, with a 9-per-cent increase in deliveries that pulled it ahead of FCA Canada, which took first place in 2015….Several Asia and Europe-based companies reported company records for the year.”

– A total of 43 expensive and exotic sports cars have gone missing from the estate of Bikram Choudury, inventor and popularizer of Bikram Yoga. A report on Jalopnik notes that, “A former employee of Choudhury, Minakshi Jafa-Bodden, has just won her sexual harassment case against Choudhury, and was awarded by a Los Angeles court pretty much everything the yogi has: his 700 franchises, for example, and, most relevant to us, 43 really expensive cars, including ’13 Rolls-Royces, eight Bentleys and three Ferraris’ … The problem is nobody knows where the fleet of supercars is. The garage manager claims ignorance …”

– Not long after German automakers were busted for manipulating emissions data, Germany’s Spiegel Magazine reports, “… that the country’s top legislative body was able to reach a bi-partisan agreement that hopes to allow only zero-emission vehicles on EU roads in 14 years.” Green party lawmaker Oliver Krischer was quoted as saying, “If the Paris agreement to curb climate-warming emissions is to be taken seriously, no new combustion engine cars should be allowed on roads after 2030.” The resolution calls on EU automakers to “review the current practices of taxation and dues with regard to a stimulation of emission-free mobility.”