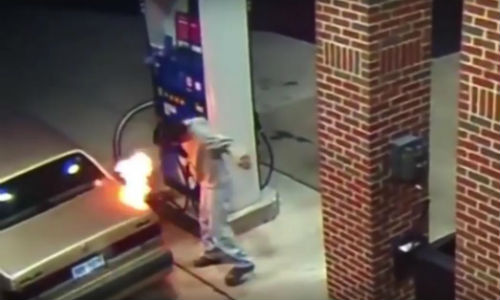 Toronto, Ontario — October 8, 2015 — Some interesting, overlooked news bits from the week that was:

– Ford Motor Co.’s Executive Chairman Bill Ford said this week that the pace of technical innovation in the auto industry has accelerated, dramatically. He also points to even more change coming up:

“We’re going to see degrees of change in the next 10 years that we haven’t seen in the prior 100,” Ford said. “There’s a lot of smart people and energy coming into this sector.”

– Sure, gas prices are low. But many Americans are turning to electric cars. One of the most popular electric cars these days? No, not the Tesla. It’s customized golf carts! A report from a 55-plus planned community in Florida known as The Villages notes the rise in the use of customized golf carts. Seat belts, turn signals, disc brakes, radios, custom paint jobs and GPS—these are high-end vehicles. Some are even considered “street legal.”

– A woman in Sydney Australia displayed some radically bad decision-making this past week. Though eight months pregnant, she took part in a staged car crash to defraud her insurance company. A CCTV camera caught the accident. The video shows an “associate” of the woman’s husband deliberately parking a Nissan X-Trail in the middle of an intersection, which the pregnant woman then t-boned with her Toyota Rav 4. A third person in a separate car (apparently overseeing the operation) inspects the Nissan before climbing into the Toyota and ramming the X-Trail a couple more times. When asked in court why she would endanger her pregnancy like that she said she was going through a “hard time” and “wanted a bigger car.”

– Traffic fatalities in the United States have generally dropped over the years. But a major investigation by the New York Times finds that the benefits of safer cars have generally accrued to the more well-off. Those lower on the socio-economic ladder have not enjoyed the same reduction in auto fatalities the wealthy have enjoyed over this time.

– Tech website NerdWallet confirms what many in the industry know: Insurance rates for electric versions of cars also available with gasoline engines have higher insurance premiums. Higher repair costs are to blame. NerdWallet calculated the average rates on the Chevrolet Spark, Volkswagen Golf, Smart Fortwo and Fiat 500. Car insurance quotes for the electric cars were 21 percent higher, on average, than quotes for the gas cars.

– Could the VW crisis be the tip of the iceberg when it comes to emissions reporting? New test data from German organization, Adac, suggests that the supposedly ultra-clean diesel engines produced by Nissan, Volvo, Renault and Jeep are also more polluting than is often thought. It has also been found that the gap between the amounts cars emit in realistic driving tests and those performed in a lab has been widening for years. Calls for a reform of government practices around emissions tests are growing. Of course, top officials from car companies are warning against getting carried away with this story. The head of Ford Germany, Bernhard Mattes, warned this week against sinking into a “general hysteria” as a result of the VW scandal. New Volkswagen CEO Matthias Mueller warned staff on Tuesday to brace for “massive cutbacks” in response to the diesel emissions scandal.

– One reason Apple and Google may find some success in the car industry: Automakers are typically several generations behind in terms of technology in the dashboard. A recent media report notes that, “Since the dawn of the industry over 100 years ago, an elaborate supply chain has sustained it until today, where suppliers produce components adhering to strict guidelines. Vehicles are designed and engineered over about three or four years, including the technology found in the dash.” That long time line means that when cars finally get into the showroom they are a couple of generations behind the latest in digital equipment offered by companies like Apple. “Even high-end vehicles retailing for over $100,000 are not immune, rolling off assembly lines with infotainment systems that are outdated almost as quickly as they’re sold at the dealership.” Making vehicles in more modular units (so that dash components could swapped in and out) is one potential solution to solving this lag issue.

– A fascinating article in Fortune magazine points out some of the things Ford is doing with the data it is collecting from connected cars. Ford has been running a project called Big Data Drive, which monitors the routes and the time employees take to drive to work. The hope is that the company can, at some point, provide better “real-time route optimization for navigation systems and fleet vehicles.” Ford is also analyzing signals from brake systems. The company is gathering data on how hard drivers push them, at what speed and under what conditions. The hope is that brake failure can be predicted ahead of time. Another project sees Ford collecting parking-behavior data from the sensor-equipped cars of 650 employee volunteers in a ride-sharing program, to see if there are ways to make the program more efficient.

– Finally, we have the case of a man in Detroit who tried to kill a spider with a lighter while putting gas in his car. This works out about as well as you would expect. Check it out in the player below: