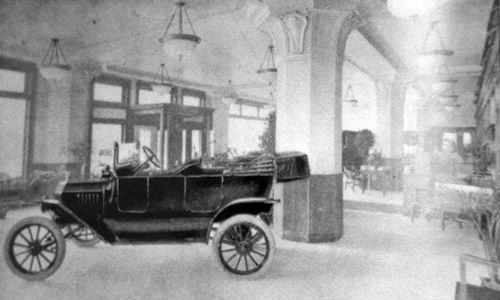 Toronto, Ontario — November 10, 2016 — This week we take a look at why it’s a bad idea to run an after-hours bar out of your shop, what may be the coming end of the sports car and much, much more!

– A driver in the UK just narrowly missed jail time for an incident in which he jumped into a car after it had been in an accident in an attempt to claim more injuries than occurred. According to a report on Mirror, the man told insurers he, “… had been in his car with his partner and three children when another vehicle reversed into them outside a supermarket.” The man filed personal injury claims reporting soft tissue injuries to all five occupants claimed to be in the car. The insurance company unearthed security camera footage of the incident that found only two children had been in the car at the time of the accident. In the video footage the father, “… can been seen running towards the car after the crash and getting inside … He then drives forward a few feet before clambering out of the vehicle clutching his neck, as if he’d been injured.”

– Police arrested six people and closed an after-hours bar located above an autobody shop in Newark according to a report on NJ.com. The Newark Public Safety Director said detectives, “… raided the Mount Pleasant Avenue shop early Sunday morning, after neighbors had reported that an illegal after-hours drinking establishment was being operated there.” According to the story, detectives seized “numerous containers of alcohol all being sold without the proper licenses.”

– Many are wondering what the effect of a Donald Trump presidency will have on the auto industry. During his campaign Trump made a range of comments, including promises to scrap NAFTA and other such trade deals. According to a report in The Detroit News, “If renegotiating NAFTA is not a success, Trump has indicated he would end the trade pact with Canada and Mexico and slap a 10 percent to 35 percent tariff on vehicles and parts made in Mexico that are imported into the US. He also has threatened tariffs of up to 45 percent exported from China to the US.”

Such a move would, presumably, throw the North American auto industry into chaos after a long period of free trade between Mexico, the US and Canada. GM is currently in the process of moving at least one plant to Mexico. No word yet on whether Trump will do anything about that, as he has promised. Trump also mused during the campaign about reducing subsidies for electric cars and abolishing Federal fuel economy standards.

– Where’s the most expensive place to insure a car in Ontario? According to a study by Kanetix.ca, that would be Brampton. Drivers in that city pay insurance bills 65 percent higher than the provincial average. According to the those who live, “… within or near the GTA (Greater Toronto Area – Ed.), chances are you’ll be paying premiums that are a great deal higher than the provincial average … While the average car insurance premium in Ontario [is] now sitting at $1,448 – the most expensive city for car insurance in the province for the second year in a row is Brampton, coming in 65 percent higher than the average at $2,392 annually. In fact, cities in Peel Region take two of the top three spots on our list.”

Along with Brampton at the top of the list is Vaughan, Mississauga and Markham. One standout on this list is Whitby, which is near the GTA, but has insurance rates below the provincial average of $1,443. Oshawa, Barrie, Kitchener, Cambridge and Waterloo, all came in below the average. The cheapest areas for auto insurance in Ontario include Renfrew, Petawawa, Pembroke, Port Elgin, Kincardine, Smith Falls, Perth, Gananoque, Carleton Place and Brockville. All of these cities have estimated annual premiums under $1,000.” At the very bottom of this list is Hawkesbury, a town located on the Ottawa river, halfway between Ottawa and Montreal, where motorists are paying an estimated premium of only $956 per year,” according to the release. http://bit.ly/2foepmv

– Ontarians have nothing to complain about when it comes to insurance costs, at least not relative to Saudi Arabia, where car insurance rates recently spiked 400 percent as a result of an “increase in traffic accidents” according to local Saud media. According to a report on Arabian Business, “Motorists have called on the authorities to intervene and bring down prices to affordable levels, while insurance providers say costs would rise further as reckless driving worsens in the kingdom.” The total number of road accidents in Saudi Arabia is expected to cross 1.1 million incidents by the end of the year, according to the report.

– Toronto is rarely thought of as a car manufacturing town these days. But a post on BlogTO.com revisits the history of Toronto car manufacturing. The article notes that Ford had an assembly plant and showroom for its Model T cars at Dupont and Christie in the city’s west end. The building is still there and features a cafe on the ground floor today. Another local manufacturer was Durant, founded in 1921 by former General Motors CEO William Durant in the wake, “…of his termination from the automobile giant he founded.” The company had a plant in Leaside and was for a while the third largest car manufacturer in the country.

– Chinese entrepreneurs have hit on the electric car as the way for the Chinese auto industry to play catch-up to western firms. Abundant subsidies in China (up to $16,285 a car) make it easy for start-ups to gain financing. An example is another new little auto company, Singulato Motors, which is set to raise some $600 million in financing as what some are calling, “China’s headlong ‘gold rush’ into all-electric battery cars,” goes ahead. A report from Reuters suggests that, “… China today is reminiscent of Detroit in the early 20th century, with a host of new car makers arriving on the scene … [as] China has made a priority of making smart, connected electric cars. Entry barriers are relatively low, and Beijing sees the sector as a way for its auto industry to challenge, and even overtake, established global automakers, several of which have instead focused more on cleaner hydrogen fuel cell propulsion technology … Singulato’s fundraising follows an around $1 billion financing deal for another Chinese EV start-up WM Motor … Other well-funded Chinese electric car start-ups include Future Mobility, LeEco’s LeSee, Next EV, Ch-Auto’s Qiantu Motor, and Changjiang Auto, as well as U.S.-based Chinese-funded start-ups Atieva and Faraday Future.”

– Meanwhile, in Germany, BMW has warned that its “… profitability this year will remain under pressure after the German automaker’s third-quarter operating margin declined on increased spending to develop electric cars and slumping sales in the US.” Electric cars are more expensive to produce and generate smaller profits than traditional autos, and that fact is affect the financial standing of the firm. According to a report on Macau Daily Times, “BMW’s return on sales from car making fell to 8.5 percent from 9.1 percent a year earlier …”

– As baby boomers age, it looks like sports cars are rapidly declining in popularity. “Boomers are starting to age out of sports cars,” says Eric Noble, president of the CarLab, a consulting firm in Orange, California, in an interview with Bloomberg. “When you get into your 60s, comfort becomes more important. Sports cars are not going away, but the market will get smaller.”

Younger generations are buying sport SUVs or simply renting access to utilitarian vehicles through so-called “access” companies like Zip Car. These services don’t typically offer sports cars, so no wonder Ford recently announced sales of the Mustang are down nine percent this year. Even the “… venerable Chevrolet Corvette and Porsche models are seeing a sales slump,” according to Bloomberg. “Porsche reported an 8 percent drop in passenger car sales …”

According to the report, as boomers age, “… there aren’t enough Gen-Xers to make up the slack, and millennials just don’t have enough cash …” to maintain a strong market for sports cars. “At Chevrolet, Corvette and Camaro sales are down 14 percent and 11 percent, respectively,” according to the story.