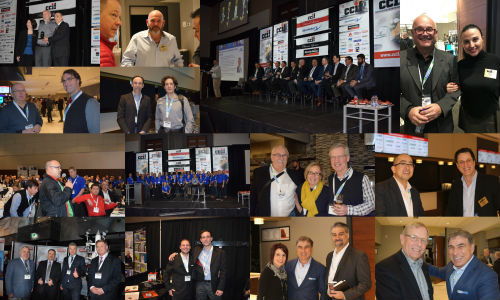 Vaughan, Ontario — January 27, 2017 — “There’s no other industry that’s as flexible, that would actually get together in a room like this to discuss these issues.” With those words, Chairman Joe Carvalho brought the latest meeting of the Canadian Collision Industry Forum (CCIF) to a close. Over 740 industry stakeholders packed Universal Event Space in Vaughan, Ontario over two days for the first CCIF meeting of 2017.

The meeting portion of CCIF began on January 27 with opening remarks by Carvalho and Brigitte Pesant, CCIF Administrator for AIA Canada. Carvalho and Pesant also took a few moments to thank Koos Reieneking of AkzoNobel and present him with an award for his service on the CCIF Steering Committee.

The presentations got rolling with Annabelle Cormack of Cormack Recruitment, speaking on “Recruitment: Bumper to Bumper.” Cormack gave a brief background on her experience as a recruiter, noting that she has been heavily involved in the automotive business in the past year, working closely with stakeholders to understand the specific issues impacting recruitment for automotive repair.

Her presentation provided best practices and tactics for recruitment and looked at ways the industry can promote existing career options.

Andrew King of DesRosiers Automotive Consulting followed Cormack, providing a top-level view of the Canadian automotive landscape. King’s presentation drew heavily on his extensive experience researching the auto industry and his current work on developing strategic studies for OEMs, parts manufacturers and aftermarket distributors. During his presentation, he outlined what he saw as potential distruptors to the industry, sorting them into “hard” and “soft” categories.

Chief among the “hard” disruptors, in King’s view, is the coming era of autonomous vehicles. He warned that they will lead to massive issues for both insurance and regulation.

“The technology is there, it can happen,” he said. “When it does happen, you will see accident rates fall. It is going to shake up the industry, tear it up.”

Marcil outlined some of the issues affecting collision repair training before leading the panelists through a survey dealing with various questions about conditions and challenges to training delivery at their individual schools. The panelists provided attendees with a good overview of the current state of apprenticeship-level training. For more on this, please see “CCIF panel looks at state of training in Canada’s colleges.”

The training panel was followed by Andrew Shepherd of I-CAR Canada, who outlined some of the improvements to continuous training that are being rolled out now and in the near future.

Shepherd provided an overview of the current status of Gold Class shops across Canada, noting that the program had been modified in recent years, meaning many formerly Gold Class shops needed more training to receive the designation. This training is still underway. Ontario currently has the most Gold Class shops at 17 across the province. The numbers for all provinces will likely increase in the near future.

I-CAR will also be rolling out a number of shorter courses soon, according to Shepherd.

“These are one and two-hour packages that will allow you, as a manager, to target gaps that you need to fill,” he said, also noting that we can expect to see more OEM specific courses as well.

“We’ve released a few already and there’s about 20 more in the pipeline. You can probably expect about 10 of these every year going forward,” said Shepherd.

A short lunch break was followed by a panel discussion led by Mike Anderson of Collision Advice. Anderson’s high energy kept the crowd’s attention focused on one of his favour topics: scanning and calibration.

This is one of the biggest issues in the sector currently, and it’s fitting that it was discussed by a big panel. The OEMs were represented by Paul Stella of Toyota Canada, Chris Hogg of Honda Canada, Scott Wideman of Volkswagen Group Canada and Bruce Woodrich of FCA Canada. The insurance side was represented by Joe Carvalho of Economical, David Wedlake of Intact Insurance and Tony Sutera-Sardo fo RSA Canada.

Representing the software side were Michel Caron of Audatex Canada, Michel Gagnon of Mitchell and Dan Young of CDS, makers of the AsTech scan tool. Terrence Bradimore of CK Collision represented the collision side.

The discussion naturally presented many different viewpoints on the various issues surrounding scanning, but in the end the consensus seemed relatively clear: scanning and calibration are now necessary parts of the repair process. For more on this, please see “Need for documentation highlighted during CCIF scanning panel discussion.”

The final presentation of the day featured automotive journalist Zack Spencer of Motormouth. Spencer showed a video highlighting some of the more recent advancements in automated driver assistance systems (ADAS) and automotive vehicles before pointing to what he considers one of the biggest changes to hit the auto industry. Toyota will be including its Safety Sense P package on every car. Toyota Safety Sense P is a multi-feature system that includes Pre-Collision System with Pedestrian Detection. Full-Speed Range Dynamic Radar Cruise Control, Lane Departure Alert with Steering Assist and Automatic High Beams.

“If Toyota does that, who’s going to do that next?” asked Spencer. He concluded his presentation with a statement that many in the audience would likely agree with. “You are living through the greatest era of change since the car was invented over 100 years ago,” he said.

The next meeting of CCIF takes place in Fredericton, New Brunswick on May 25 to 26, 2017. For more information, please visit ccif.ca.