Modern automotive coatings are more complex than ever— radar detection, EV sensor compatibility and supply chain issues are some of the factors companies must consider before developing the colour hue itself.

Most customers don’t see that though—pretty colours are more obvious than flecks of radar-reflecting material. According to BASF and Axalta, blue’s time in the sun has passed, dropping four percent in popularity, back to red’s nine percent. Blue is still the most popular chromatic colour, it is now comfortably below all the chromatic colours, but competing with silver for the fourth most popular colour.

Red remains the second most popular chromatic colour, but can easily overtake blue. Other colours like green and beige remain minuscule but shouldn’t be ignored. Much like red and blue, these colours are competing for the space held by white, black and grey.

While reports by BASF and Axalta agree that white, black and grey remain the most popular automotive colours worldwide, there is less of a consensus on the direction white will go in North America’s automotive industry.

White is typically the colour of choice for corporate vehicles: it’s cheap in bulk, presents a blank canvas for logos or slogans and almost certainly matches older vehicles in the fleet. On the other hand, consumers have more variance with personal choice and colour trends taking a greater role than pure costs and practicality. 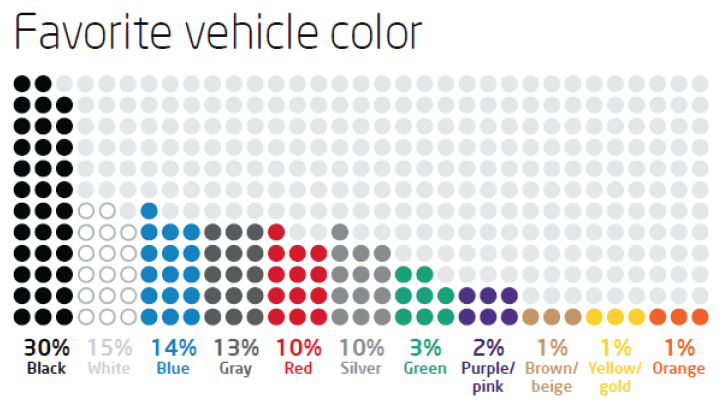 This is shown in Axalta’s 2021 Consumer Survey, which collected data from 1,003 vehicle owners across the United States. 30 percent said their favourite colour was black, while 24 percent favoured blue or red—only 15 percent preferred white.

“With demand high and supply trending lower, buyers could be forced into making more pragmatic choices and fewer emotional choices. Consumers have quickly shifted to more familiar shades in the achromatic space,” said Paul Czornij, head of Automotive Design for the Americas.

WHILE REPORTS BY BASF AND AXALTA AGREE THAT WHITE, BLACK AND GREY REMAIN THE MOST POPULAR AUTOMOTIVE COLOURS WORLDWIDE, THERE IS LESS OF A CONSENSUS ON THE DIRECTION WHITE WILL GO IN NORTH AMERICA’S AUTOMOTIVE INDUSTRY.

When accounting for corporate vehicles on the road, almost three in four vehicles in North America are achromatic. Infographic by BASF, BASF Color Report 2021. 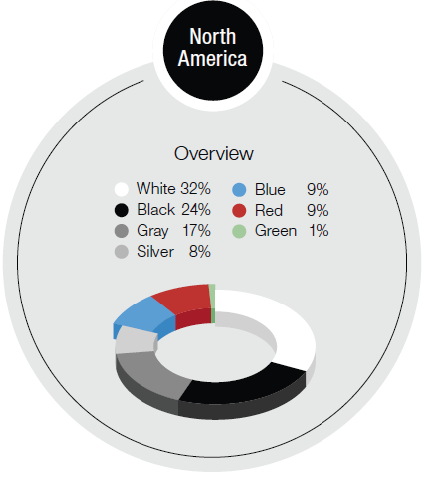 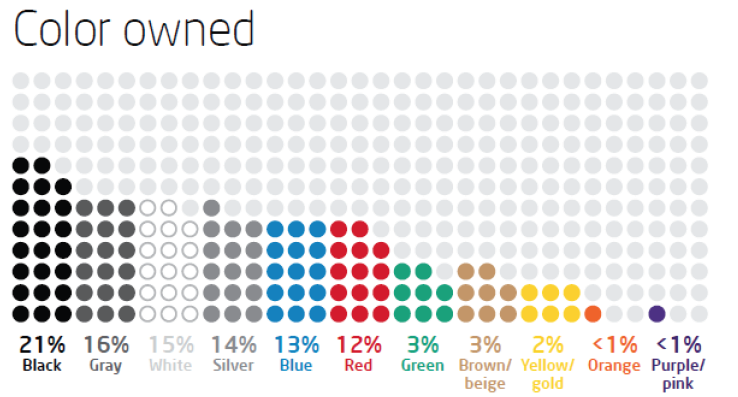 With consumer vehicles, variety is still a key factor. infographic by Axalta, 2021 Consumer Survey in USA

Despite the rising popularity of chromatic shades like red and blue, BASF’s 2021 colour report says nearly one in three North American vehicles are white.

Combined with 2021’s supply shocks and material shortages, production “seemed to favour the larger, more popular platforms in the midst of the downturn,” said BASF. The platforms in mind? SUVs and trucks.

BASF explains that these vehicles are the most profitable platforms during economic slowdowns. With automakers producing more SUVs and trucks, to allocate resources profitably, we likely saw more white vehicles on the road – neon delivery vans haven’t caught on (yet).

Effectively, we are seeing data polled from different audiences. Axalta’s polls seem to focus on non-corporate vehicle owners and reflect trends in the consumer market. White, black and grey remain essential colours for the autoworker’s toolkit, but reds and blues are slowly rising in popularity.

Out of 25 percent of consumers who considered repainting their vehicles, 28 percent chose black while 31 percent chose blue or red. Only 9 percent chose white, emphasizing the weight of corporate customers in the automotive industry. Whether you work with corporate vehicles or your neighbour’s Ford, the impact of corporate spending is almost guaranteed to impact your shop in some way.