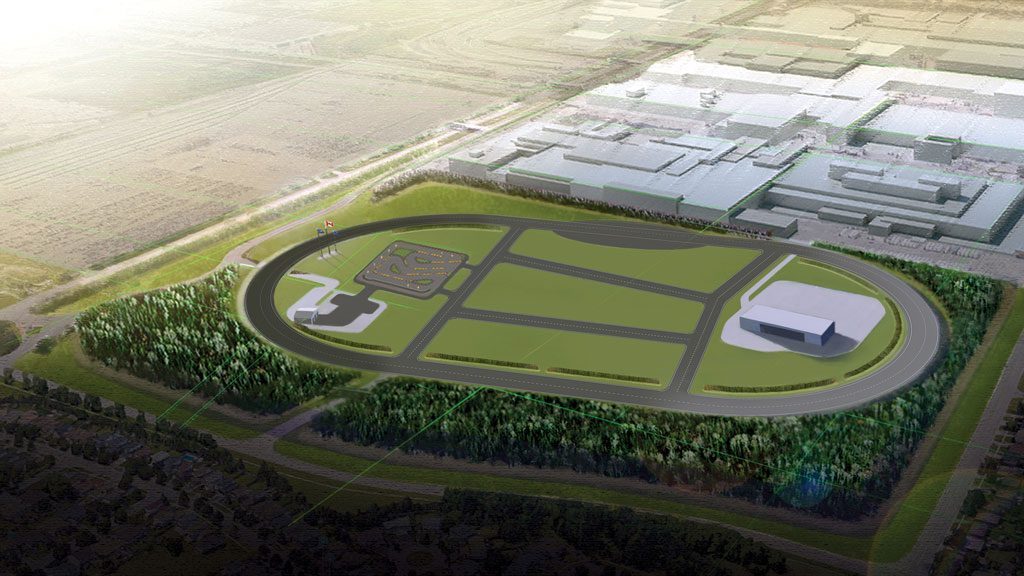 In the Loop
Construction has begun at the southern end of Oshawa, Ont.’s General Motors assembly plant. Come the facility’s closure this month, the site will be transformed into a trial track for autonomous and electric vehicles.

The large, oval-shaped track is part of a $170-million investment that was announced in May. With the investment, GM hopes to position itself on the cutting edge of auto technology development in Canada.

“It’s been lots of work to level the construction site,” said Jennifer Wright, director of communications for GM Canada. “There’s a lot of dirt to move and gravel to import onto the site to create a flat, even surface to pave on.

The track will be just under a quarter-mile⁠—or 0.40 kilometres⁠⁠—in length, with banked curves to allow the tested vehicles to operate at normal or high speeds during trials. There will be two straight sections of roadway on the inside of the track, as well as service roads to surrounding buildings.

According to Wright, the track will also be modelled after Canadian highways to allow for real-world testing scenarios.

EV Educated
The British Columbia Institute of Technology (BCIT) is taking a step in a greener direction, as the college plans to launch a new electric vehicle training program in the New Year.

After receiving financial support from CleanBC and completing a pilot project, BCIT has announced it will be launching a newly developed EV Maintenance Training Program, which will aim to assure that the province’s workforce has the skills and training needed to support more electric vehicles on the road.

According to the government’s CleanBC plan, all new light-duty vehicles sold in B.C. will be zero-emissions by 2040. Currently, the province boasts the highest number of EVs in Canada, with about 30,000 zero-emissions vehicles on its roads.

BCIT has said it is also planning to develop an EV curriculum for electric buses and heavy-duty trucks.

Aggressive Adoption
Despite sales of electric vehicles in Canada reportedly growing by 25 percent this year, industry analysts are saying the True North needs to be more aggressive with its EV adoption.

When compared to 2018, EV sales grew by 25 percent this year. EVs, however, only account for 3.5 percent of new vehicles sold nationwide.

EV sales are at a record high in B.C., where they account for close to one-in-ten new vehicles sold.