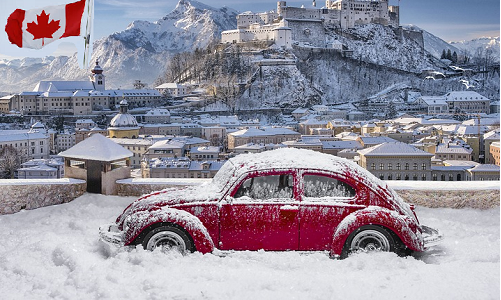 Come work in Canada, young American body repair technicians—we’ve got more to offer than you might think.

Call me a romantic, but it looks to me like Canada is the real land of opportunity—at least if your career ambitions are in the collision sector.

At this point, some readers will wonder what was in my morning coffee.

Many will have just read I-Car’s latest Snapshot on the Collision Repair Industry, which was updated this week. It says something very different.

U.S. auto repair workers are better paid than ever. American body repair technicians earn an average of close to $55,000—about $72,000 Canadian. More than three in ten employees reported annual earnings above $70,000 USD—$92,000 Canadian. According to AutoConnex (autoconnex.ca), Canuck body repair technicians receive just under $61,000 each year—about 18 percent less than their Yankee peers.

Sure, at first glance, Canadian repairers are paid considerably less than their American peers. The truth is—as it always is—worth a second glance.

The average Canadian body technician a little under 35, and the average American 41, or so those sources say. If this is considered, then both groups earn more than about 57 percent of Americans in their age categories.

So why is Canada the land of opportunity?

Our dollar. It is low—though rising somewhat.

Now valued at three U.S. quarters, the Canadian dollar is up three cents this year—and the economy has outperformed expectations. While confidence in Canada’s ability to defend its economic interests during the Trump administration has waned, the Government of Canada has been successful in ensuring it restores calm and has had a number of major victories in economic negotiations.

While, in the 1990s, the dollar has traditionally been generally stable at two-thirds the value of the American dollar, it has spent most of the last decade worth more than 80 cents.

Sure, American repairers may make more on paper—but Canadian ones are doing just as well if age is considered.

Regina, Saksatchewan — The Saskatchewan Association of Automotive Repairers (SAAR) is already gearing up for its annual spring conference, which