Toronto, Ontario — April 2, 2020 — Despite being its first foray into the world of live online broadcasting,  the 2020 International Bodyshop Industry Symposium in the United States of America was a staggering success. Especially so when it came to its coverage of one major issue– the increasing involvement of OEMs in the auto claims process.
Here, the IBIS Summit’s speakers revealed just how far OEM certification programs were winning this tug-of-war with insurers.
During the question period that followed his keynote speech, David Williams, managing director, underwriting and technical services for AXA Insurance U.K provided an auto insurer’s perspective on the matter.
There was something almost defeatist about his stance. “We are seeing massive increases in collision repair costs,” Williams said, apparently acknowledging that insurers were no longer as in control of the claims process as they have traditionally been. “We have to go through a phase of claims increases.”
Despite this apparent interest in finding a middle-ground, he described some non-OEM repair procedures as being as-good-as, and cheaper than certified ones.
Jennifer Boyer, Ford’s global collision business and strategy manager devoted her presentation to Ford’s position on certification.

In her presentation, Boyer was clear about the fact that, when it came to becoming more involved in repairs, Ford felt it held all the cards.

“Our Ford Certified Collision Network is now exceeding 2,000 locations,” Boyer had said to listeners. “We have new collision repair training available, and are increasing consumer awareness through the ‘Keep your Ford a Ford’ campaign.”
After Boyer’s presentation, Jason Moseley pressed Boyer for some hard numbers, asking how many people were embracing Ford’s app-based collision advice.
Available in the U.S. only, the app is capable of automatically directing drivers to Ford-certified OEM facilities the moment a vehicle is in a collision. This functionality threatens to provide the OEM with a hitherto unheard-of amount of influence in the auto claims sector.
“We’ve been surprised by the user uptake,” Boyer answered. “It is getting thousands-of-hits per-week.”
That thousands-of-users are taking advantage of it each week is telling.
The auto insurance sector may not be the only sector to be quaking in its boots. Given the success of the online-only summit, large conference centres may also have to adapt to a grim new reality for their industry.
Share on facebook
Facebook
Share on google
Google+
Share on twitter
Twitter
Share on linkedin
LinkedIn 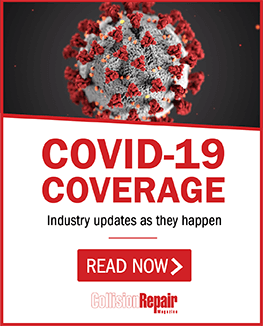