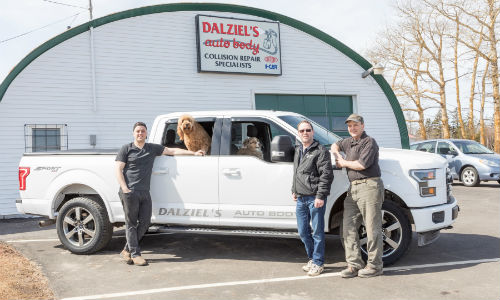 Charlottetown, Prince Edward Island — April 5, 2017 — Fifty years in business is impressive regardless of the industry. Dalziel’s Auto Body, just outside of Charlottetown, PEI, has hit that mark.

Chris Dalziel is the facility’s Operations Manager and the nephew of founder Bill Dalziel. In a recent interview with Collision Repair magazine, Chris noted that Dalziel’s is the largest autobody shop in PEI and the only “Island owned and operated shop in the Charlottetown area.”

He says that the shop’s size and location come with their own set of challenges, but the team takes them in stride. “It is particularly hard for us to succeed in a market where the big names are trying to take over,” he says. “But, we are still competing with and even striving over the ‘big wigs’ in volume every month. Furthermore, we’re constantly praised by our large customer base, insurance companies, appraisers and adjusters on our work and how easy we are to deal with.”

Owner and founder Bill Dalziel says Dalziel’s Auto Body wasn’t always the giant it is today. It started out as a small garage behind a dealership.

“Back then we could only fit two or three cars in there,” he says. “Four cars if they were the tiny little Volkswagens!”

The idea to open his own shop came after a hard winter and hard economic times, when Bill had been laid off from his job as a painter and body tech. He says he owes his success to both excellent customer service and to jumping on the right things at the right time. There’s a reason he mentions Volkswagens. He says he started repairing Volkswagens at a time when nobody else was. Never underestimate the power of carving out a niche.

“In the early days of Dalziel’s Auto Body, I saw success because I was the only person around who could put a wrench to a Volkswagen,” Bill says.

Like many in the industry, Dalziel’s is challenged with a lack of local talent. This has led to a very diverse shop staff.

“We’ve got quite a diversified staff here,” says Bill. “There’s a fellow from Ireland, another fellow from Africa, and a fellow from India who just started here a few months back. It used to be that people would walk through the door asking for a job, but I haven’t seen that happen in some years. We’re lucky enough to have four or so gentlemen with their journeyman’s papers, myself included.”

The labour challenge is widespread, but it may be compounded if your shop is in a rural area. Charlottetown certainly isn’t rural, but the entire province simply isn’t very big. All of Atlantic Canada only has a scattering of colleges that teach autobody. None of them are located in PEI. Bill says that over the last few years, he’s had to train quite a few workers himself.

Bill has grown his business over the years, and has some advice for young people who want to open their own shop.

“First thing is you have to have deep pockets or a lot of drive to get started in the industry now,” he says, referring to the higher-than-ever cost of training, equipment, and licensing. “And you can’t cut any corners in this business. If you do things right, your customers will come back time and time again. Treat them right and they’ll treat you right.”

It’s a philosophy that has kept the business booming for the last five decades. For more information, please visit dalzielsautobody.com.