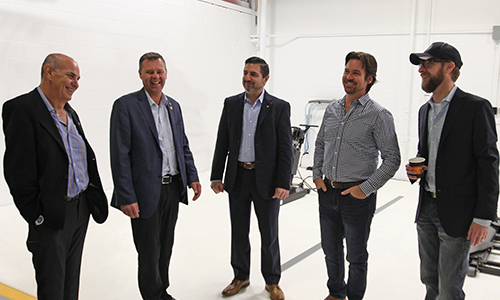 By Erin McLaughlin and Tom Davis

Cobourg, Ontario — December 13, 2017 — A group of dealerships in Cobourg and Port Hope have joined forces to open their very own bodyshop – Northumberland Collision Centre. The announcement indicates a change for the industry, a shift away from the independently owned or banner business.

To the investment group, the benefits of buying together rather than individually, are clear. For starters, of course, the cost of operating a business is reduced significantly when associated costs are split between several people. As well, with multiple dealerships feeding customers into the shop, Campbell describes it as a “sure fire success.” He added that they wouldn’t need any customers outside the seven dealerships to keep the doors open.

Members of the investment group are often asked whether they will get along, especially considering that they’re technically rivals. According to Vandermeer, each of the owners takes turns taking on the position of Chairman of the group. The Chairman is in charge of making various decisions regarding the running of the business. The group is also brought together by a common goal: customer retention.

The idea behind the opening of the store is for the dealers to offer their customers not just a “great sales and service experience,” but a full-service experience where they can look after their customers from start to finish. “We want to close the loop in our services – we sell the car, and we fix the car,” commented Campbell. The new owners also want to ensure their customers are guaranteed to receive services like scanning, and OEM parts as opposed to after-market products. Campbell argues that as cars and their safety components become more complex, the need to exclusively use OEM parts will become all the more pertinent.

The group formed a little over a year ago and began to develop the project with consultation from Consolidated Dealers, along with their respective manufacturers. At 10,000 square feet, it is already Northumberland’s largest collision centre with options already being discussed for future expansion in the next two to three years. Campbell noted that expansion will likely be necessary. “We were worried we would hit capacity the day we opened our doors, given the repair centre is associated with seven franchises. The main concern is making sure we have enough space to get cars back out to customers quickly.”

Kor Stoker and his son Kurtis Stoker, who owned the business (Cal Kor Auto Collision) before its transformation, will manage the business. The Stokers will, according to Vandermeer, be in charge of the day-to-day operations of the facility, and overlook the technicians. “Kor has so much experience in the industry, and that makes our job easy,” commented Vandermeer. “I think Kor Stoker’s experience in the industry is what sets us apart.” Proskos’ excitement regarding working with Kor and Kurtis Stoker echoes that of Vandermeer. He said, “We’re allowing them to run it. With their experience, it’s them that’s going to make us successful.”

The team of technicians originally working at Cal Kor Auto Collision have been moved to the new facility. Interestingly, the facility was able to hire all the qualified staff it needed, despite common issues surrounding finding technicians in this industry. On this, Campbell said, “Word on our state of the art facility got out, and this is very appealing to youth. With seven dealerships associated we have guaranteed customers, which means job stability for our staff.”

The business will focus on pre and post-scanning each vehicle that comes through its doors, as well as using original manufacturer parts and guidelines. “Fixing it right the first time is the number one most important part of our service,” said Campbell.