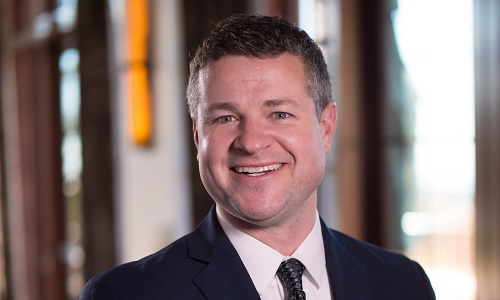 By Gideon Scanlon
Montreal, Quebec — May 29, 2018 — “I don’t have a crystal ball. I can’t pretend to be able to anticipate every change that is coming to the industry, but I can ‘follow the money,'” said Ryan Mandell, Mitchell International’s director of performance consulting. “What I do know is that blockchain technology will underpin many of the biggest changes we will see.”
Mandell knows that, for many people, blockchain is a futuristic buzzword most often heard in conversations about Bitcoin, the cryptocurrency it was invented to enable.
So what exactly is blockchain? As Mandell defined it at last week’s CCIF conference, it is “a digitized, decentralized, public ledger of transactions,” one that works, “like Google docs, a system that allows many people to work on a single document without the need to save updated versions, but one where the document can only be added to, not edited.”
He even admits that he was not always an expert, until his ‘follow the money’ analysis of the future of the automotive industry convinced him of blockchain’s importance.
“There are literally hundreds of organizations around the globe that are invested in the growth of the automotive applications of blockchain. These range from research institutions and universities to varying sizes of public and private corporations,” Mandell said at CCIF. “And it’s not just dedicated tech companies that are working on this. The OEMs see the value of blockchain and are placing large bets on the technology as a key component of their future mobility strategies.”
Mandell said that many of the biggest areas of investment in the automotive industry will depend on a reliable ledger system to become widely accepted by drivers. From self-driving cars that must be able to juggle information from hundreds of censors to make decisions on the road, to the creation of apps that will allow OEMs to compete in a post-Uber ownership environment.
Within the collision repair industry Mandell believes the adoption of blockchain technology has the potential to decrease cycle times, increase the reliability of repairs and limit the liability of repairers.
“Think about it: imagine, at the end of a repair being able to provide your customer with all of the intricate details of the parts that were installed on their vehicle,” Mandell explained to the CCIF attendees. “Data all the way from the source of the raw materials to the exact date and time the resulting parts were ordered and installed on their vehicle. Think about the increased customer satisfaction and reduced liability if we could match every estimate of record with a secure blockchain parts record.”
Insurers, too, will see their industry rocked by the widespread adoption of blockchain technologies, Mandell believes. Like OEMs, they may soon use the technology to offer products that are better suited to a world where vehicle ownership is becoming less common.
“We will continue to see liability, collision and comprehensive coverages offered, likely in different forms that range from the traditional coverage to on demand and usage based policies,” Mandell said. “Additionally, autonomous vehicles will likely require product liability coverage from the vehicle and systems manufacturers.”
While Mandell recognizes that much of the conversation around blockchain is prohibitively complex for most listeners, he credits the work of CCIF organizers with building a platform where even difficult to understand ideas are able to be considered within the industry.
“What is great about CCIF is that the participants represent a great cross-spectrum of the automotive industry, with collision repairers, insurers and OEMs all sharing ideas,” Mandell said in an interview with CRM after his speech. “We are starting to see a collaborative process going on within the industry because of these forums.”
Look for more of CRM’s in-depth breakdown of the speeches and presentations at CCIF in Friday’s eZine.
Share on facebook
Facebook
Share on google
Google+
Share on twitter
Twitter
Share on linkedin
LinkedIn
PrevPreviousAxalta launches three-piece tri-coat fan deck to guide painters to the perfect finish
NextIn Memorium: David SmithNext