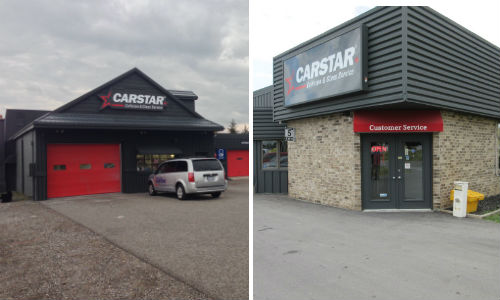 London, Ontario — June 29, 2016 — You can add two more names to the short list of collision repair facilities that have achieved I-CAR Gold Class status. They are two CARSTAR locations in London, Ontario.

“It was quite the task,” says Minogue. “My two appraisers had to take eleven more courses. The body men had to take six or seven, including all the advance welding courses on structure and sectioning. So it was a lot of work.”

Minogue was sure to recognize the time and effort the employees put in. To qualify shops have to have four “Role Reps” who have achieved enough training to qualify in the following areas: Structural, Non-Structural, Production Management and Refinish. Achieving Gold Class requires substantial buy-in from employees.

Achieving Gold Class status is an impressive accomplishment. I-CAR estimates only 10 percent of repair facilities currently meet the standard. “If you want to tell insurance companies you’re best-in-class, this is what they say they want. I hope it pays off and helps us grow,” says Minogue.

“The shop has to be spotless and organized from one end of the other. You have to have designated lines on the floor so that everything has its place. There are hanging signs from the ceiling that tell you what area of the shop you are in,” says Minogue. “If you have a customer who want to come in and inspect the place they’ll see the shop doesn’t look like a body shop of the old days, or like one of the ones you see on the TV. It’s quite clear this is a well-run shop. It makes me proud of my shops. It’s just something we had to have.”

CARSTAR London West is a 6,500 sq. ft. facility that generates the single largest dollar amount in CARSTAR’s Canadian network based on square footage. CARSTAR London East was a corporately owned location that had hired Minogue as a manager originally. He bought the location 16 years ago. The two facilities employ 45 people.

“The original shop is in a good location. It’s been there a long time, since the ’60s. I have really long-term staff there. I have two painters, one that’s been there 17 years, the other 18. And I have a body man that’s been there 30 years. The rest are all ten years plus. So there are really long term employees. They really work well together,” says Minogue.

The investment is worth it. “My customers and employees want to know that I’m going to be around for a long time,” says Minogue. He’s already thinking about his succession plan. “My son just turned 21 and finished apprenticeship. The plan is he’ll take over from me.”
Minogue also runs an appraisal centre and an auto glass shop that deals with 200 claims a month.