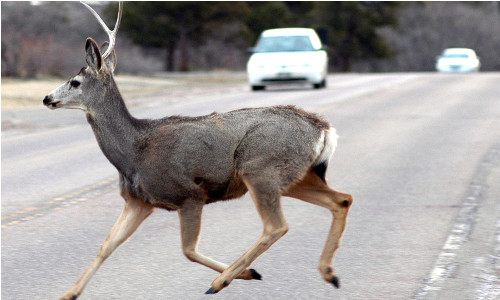 Peterborough, Ontario — November 7, 2017 — Around one in three drivers in Canada do not feel confident that they would know how to avoid a collision with a large animal, according to new research from State Farm Canada.

The survey, which polled more than 3,000 respondents of driving age across the country, found over 80 percent of drivers believe that better public education about how to react to wildlife on the road is needed to prevent collisions that could lead to injuries and fatalities.

According to the survey, when seeing a deer in the middle of a two-lane highway, Canadian drivers are most likely to brake (66 percent) or take their foot off the gas (55 percent). More than one-third indicated they would honk their horn and and one-quarter said they would swerve.

“The unpredictability of these situations, combined with human impulses to try to preserve the lives of these animals makes these situations difficult and dangerous,” said John Bordignon, Media Relations at State Farm Canada.

“In fact, according to police and road safety experts, swerving is not the best strategy when approaching wildlife on the road. Instead, they advise drivers to maintain their line, even if it’s toward the animal, and firmly apply the brakes. Swerving could send you into the path of an oncoming vehicle or cause you to lose control of your car.”

Canadians want and need more education on how to deal with wildlife on our roads, according to the survey. The most likely time to encounter wildlife is at dusk or dawn, in October and November, on two-lane rural highways with speeds of 80 km/h or more. From an insurance perspective the average auto damage claim after hitting an animal is $4,500.

Shane Campbell, owner of CSN City Centre in North Bay, told Collision Repair magazine that wildlife collisions represent an average of 30% of the shop’s yearly claims. The percentage rises in the spring and fall.

“There is now a fence along highway 11, so we have seen a slight decline in the number of wildlife collisions recently, the percentage was much higher in previous years,” he said. “Collisions with deer can cost anything from $6,000 and up, while a collision with a moose or a bear and you could be looking at anything from $20,000 or more. In fact we repaired two trucks last month with damages exceeding $23,000 each.”

Brent Gerrits, of Brent Gerrits Collision and Refinishing, added: “The most common wildlife collision we see involves deer, but you’d be amazed how much damage even a pheasant could do.”

Meanwhile, more than 80 percent of respondents claim they slow down when they see road signs for wildlife in the area, and most respondents believe either evening (46 percent) or night (36 percent) is the most likely time to hit an animal on the road.