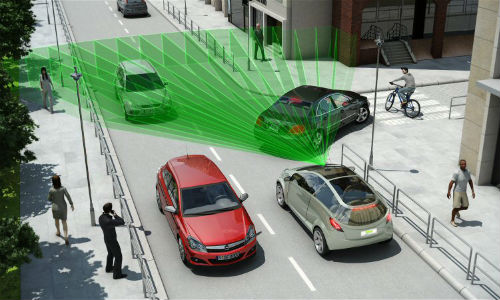 Quebec City, Quebec — June 2, 2016 — Just about every vehicle feature starts out as a high-end option, but sooner or later rolls out to lower-priced models as the technology becomes cheaper. That day might be coming soon for Automated Driver Assistance Systems (ADAS) such as autonomous emergency braking and traffic jam assist.

Some of the most expensive components of those systems are the sensors, specifically the LIDAR system. LIDAR is a long-range sensor that uses lasers to measure distance and velocity of the objects around the vehicle. It’s a crucial piece of technology in ADAS, but they’re also relatively expensive systems.
However, a Canadian company believes it has a cheaper solution. LeddarTech is based out of Quebec City. The company has reported that Valeo, a Tier-1 supplier to the OEMs, has announced the addition of a new low-cost, solid-state LIDAR based on LeddarTech’s technology.

The solid-state LIDAR, developed by Valeo, together with LeddarTech, will have no mechanical moving parts and will be the least expensive LIDAR sensor on the market. A press release accompanying the announcement says it “will provide best-in-class sensing performance to accurately detect pedestrians, bicycles, motorcycles and cars. Its purpose-optimized optical system enables a detection range of up to 100 meters, which is also unique in this segment.”

A statement from LeddarTech says the new LIDAR system has a field-of-view that’s easy to adapt, which means the sensor can be used for a wide variety of functions, including autonomous emergency braking and right turn assist in commercial vehicles. It can also contribute to automated driving functions, such as traffic jam assist or automated parking. The sensor works as well at night, in low light situations, and in adverse weather conditions, such as rain or fog. No word yet on how well it deals with snow.

“Valeo has truly been a visionary and today benefits from this first-mover advantage. By bringing to market a proprietary solid-state LiDAR that is able to meet OEM requirements for mass-market deployments, Valeo positions itself as the clear market leader in automotive-grade LiDAR” said Charles Boulanger, CEO of LeddarTech.