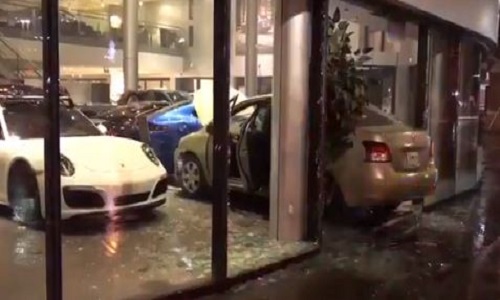 Melissa Bradbury, the driver of a CR-V in St. Johns, Newfoundland reported her vehicle missing from her sister-in-law’s driveway in November. She informed her insurance and they initiated the vehicle was a write off. Until recently when she received a notice that her vehicle had been parked on the road of a residential street for the past few months. With Bradbury and the residents of Eric Street calling the city for weeks, she wonders why it wasn’t found any sooner.

Talk about strange, but a 48-year-old man driving a Ferrari in Florida, drove his luxury vehicle straight off a dock into the ocean. Security footage caught the incident on camera, where it looks like an officer is telling the man that he couldn’t park there. He scurried to his vehicle and then drove right off the dock into the ocean. Sinking down 30 feet, the man was reportedly not injured. The vehicle, however, had to have been pulled out using inflatables. It’s still a mystery as to why he would even did that in the first place.

Because You Had A Bad Day

It’s the second incident this week of someone smashing through the glass and driving right into the showroom of a dealership. The first was in St. Johns but just the other day, a 20-year-old man must have been having a bad day when he mounted a curb and swerved into the showroom of a Porsche dealership in Toronto. He drove right through the glass, hitting three vehicles, one of them being valued at $145,000. The overall damage to the building and the vehicles is costing nearly $100,000.

A four-year-old child was caught on camera riding on top of the roof rack of his parent’s vehicle. The mother claims that she had no idea he was up there and that he must have climbed up there when they weren’t looking. While they were driving around with their son on the roof, other drivers were honking and flashing their lights at her. After she was alerted from the drivers on the road she pulled over and placed her child in the car right away. The mother is now facing a charge of dangerous driving of $3,000.