Dented Canada has finalized an agreement with Vale Training Solutions, which will allow the company to administer the Vale PDR Certification Program throughout Canada. The program will be administered by Dented on Vale Training Solutions’ behalf. Depending on the level of certification a technician is attempting to achieve, the certification will begin with test administrators making an appropriate size dent in the metal—using an air gun filled with compressed air that shoots out a steel ball.

A PSI gauge will also measure how powerful the ball is discharged into the panel, which will allow a consistent sized dent to be made. After the dent is made, a technician will have a time limit to properly repair the dent. Once the repair is complete, the dent will be inspected and re-measured with a Vale training calibrated scanning machine. The technician will then be ranked based on the size of the dent and the time it took them to repair it, as well as the quality of the final product. To complete the testing, Dented will be booking appointments throughout Canada. The official unveiling and initial testing began on October 1, 2020. 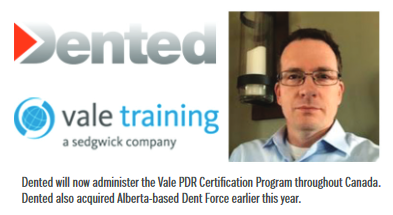 Simplicity Car Care is pleased to welcome its brand-new Gatineau, Quebec. and Rogersville, New Brunswick, locations into its family of collision repair centres. “We are thrilled to expand the brand into the provinces of Quebec and New Brunswick as these markets present a great opportunity to support independent collision repairers in growing their business while enhancing their quality of life.

We are equally excited to work with our insurance partners to help make their policy holders experience, simple and seamless.” says Domenic Ieraci, president of Simplicity Car Care. These two latest locations can now be added to a total of 48 Simplicity repair centres across the country that strive to make car care simple and affordable for every vehicle owner.

BOYD’S BACK TO BUYING

Last month, Boyd Group Services told investors it had re-entered the mergers and acquisitions game and had resumed spending to upgrade existing facilities. During an August 12 earnings call, CEO Tim O’Day said that Boyd stopped M&A because of the “significant uncertainty” at the beginning of the pandemic and discomfort over the idea of staff travelling to purchased body shops to integrate them. However, the company is “once again beginning to evaluate growth opportunities as they emerge,” O’Day said during the same call.

In the United States, ProColor Collision will initially focus on building its network in California, Florida, Georgia and the Carolinas. Its team of industry professionals will bring proven experience in sales, operations and marketing as well as standardized tools and training to help prospective franchisees grow their business further.

Rob Steele, CEO of Steele Auto Group announced he has acquired 24,000 common shares of AutoCanada at a price of $17.25 per share for aggregate consideration of $414,000. Following such acquisition, Steele, together with presumed joint actors pursuant to applicable securities legislation, controls 2,756,455 shares representing 10.04 per cent of the outstanding AutoCanada shares.

Opus IVS has been awarded a patent for a pass-thru remote diagnostic system. The invention was originally created by Bluelink, however Bluelink was acquired by Opus IVS in 2019 with a patent priority date of September 2010. For the past two decades Bluelink has been a pioneer in creating innovations that would allow a technician to remotely diagnose a vehicle using J2534 and other standards. The technology that was originally developed by Bluelink has been used by Opus IVS to deliver diagnostic repair guidance and programming services remotely from seven call centres with hundreds of expert technicians.

PPG AND THE DOE

PPG has received funding from the U.S. Department of Energy to pursue research in the use of two versatile, high-output processes in the production of lithium-ion battery electrodes. The goal of the PPG project, titled High Energy and High Power NMP Free Designer Electrodes with Ultra-Thick Architectures Process by Multilayer Slot-Die Coating and Electrophoretic Deposition, is to achieve step-change improvements in production efficiency of lithium-ion batteries used in automotive and commercial vehicle applications.

Multilayer slot die coating and electrophoretic deposition (EPD) are highly scalable methods for applying uniform films on a variety of substrates, says PPG. The coatings giant was the first to commercialize cathodic EPD, an industry standard for protecting vehicle panels and components from corrosion. The three-year U.S. $2.2 million project is one of 13 selected through a DOE initiative focused on addressing engineering challenges for advanced battery materials and devices.

What Wood You Do: RCMP stop Alberta driver for driving with lumber out window