Cole was one of three Battle of the Builders participants to receive a Golden Ticket, which won him transportation and accommodation to SEMA and a spot in the Young Guns competition.

A collision repairer for more than 35 years, Chelsie Lesnoski’s father never wanted her to find a career in collision repair; he swore she would end up resenting a life in the sector.

But now Reb Lesnoski couldn’t be prouder of his daughter.

“I eventually won him over,” Chelsie told Collision Repair, hot off the heels of SEMA 2021, where she claimed the title of the first-ever female builder to claim a top-three spot in the Battle of the Builders Young Guns competition.

Cole Marten and Chelsie Lesnoski are the owners of Penticton, British Columbia’s Throttle Thrashers Garage, a shop specializing in custom builds and paintwork. The pair also happen to be known for breaking records at the SEMA Show annual Battle of the Builders Young Guns competition.

Cole and Chelsie’s first swing in Battle of the Builders happened in 2019 when they brought Chelsie’s 2013 Scion FR-S down to Vegas. Chelsie had initially met Cole during a test-drive on his buddy’s car. The rest is history. Two years and a business together later, the pair completed a Nissan Skyline engine swap and refinished the Scion in a custom purple developed by Chelsie; but she never expected it would go to Vegas.

“I was building that car for the purpose of going on a little car cruise here in town,” she said. “I rolled it out into the sun the day before the cruise and asked, ‘why the hell does that quarter panel look more pink than purple?’ It was really devastating—making that car cruise was a personal goal I set for myself.” “I’m sitting there scratching my head thinking, ‘This car hasn’t even driven yet, and you want to go on a cruise?’” laughed Cole. After their first SEMA experience, Cole and Chelsie turned Throttle Thrashers’ focus to Nissan Skylines. Chelsie would do the painting, while Cole would handle mechanical work and fabrication.

“No matter how blasphemous the idea, we love it,” beamed Cole. “The worse it is, the better.”

And unique builds were certainly the goal for the couple heading into SEMA 2021, where each brought their own unique ride to the Las Vegas Convention Centre. 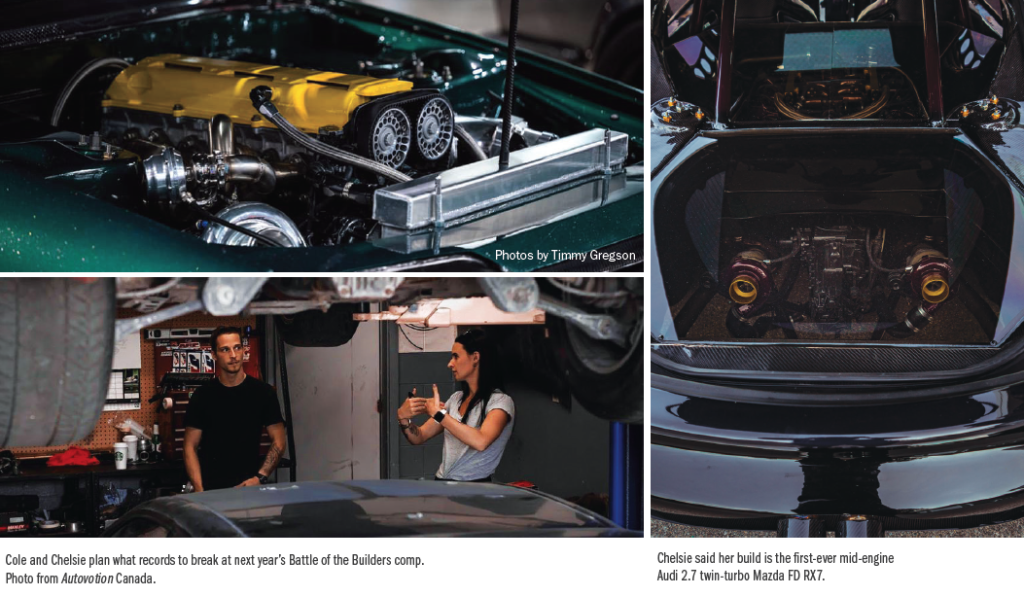 “I spent two years thinking about this car,” said Chelsie. “Every nut, weld and stroke of paint was done by my own hands.”

Cole, who claimed one of three all-inclusive SEMA Show Golden Tickets, took a 1991 Nissan Skyline R32 GTR down to SEMA, equally adorned with modifications, featuring a 1,000 horsepower 2JZ engine conversion with a changeover to AWD, which required a custom front differential, transmission tunnel and adapter. A widebody kit was also moulded in to make the six-inch wide-body increase appear seamless.

“It’s also LHD swapped steering,” said Chelsie. “So, we can fist-bump each other at red lights.”

One of the hardest parts of this year’s builds, the couple says, was teaching the other their trade.

“The hard thing about teaching is that no matter how you show someone, they’re always going to find their own twist to doing the job,” said Cole.

As for future builds, the couple says there are no questions about SEMA 2022. “Next year, I’m going to be competing in the pro class, so I’m planning to just do a fun entry for that,” said Cole.

Chelsie said she’s aiming for more records. “I’m shooting for the podium in the next two years,” said Chelsie, who will compete in the Young Guns segment until 2023. “I’m going to be rebuilding the FR-S this winter, we might collaborate on it again, and I’ll bring that to SEMA 2022.

“The build I have in place for 2023—I feel very confident that is the winning car. If I can achieve what I have planned, I do feel like it will be the car that takes me on the podium and makes me the first woman in that position.”