There are few things that affect the course of our lives quite like the impressions left on us by family. Little else impacts the places we live, the opportunities we do and don’t take quite like family. Family and the love that they can foster can act as a spark for some of the biggest decisions one can make in life.

In the case of Bassem Hijazi, what initially looked like the decision to put his dreams on hold turned out to be one of the best choices he ever made. “I had no intention of being in the automotive industry at all,” said Bassem, over the phone with Collision Repair.

“I used to work in the Montreal nightlife—clubs, bars, restaurants. I was planning on opening up my own restaurant at one point.” However, when the lights came down, Bassem saw that his father was struggling to keep his head above water at work.

“My dad was making good money then, but it was just him and his friend. There were only two to work the shop and they were doing very well, but at a certain point with all the changes things became difficult,” said Bassem.

“I had to consider that this is what feeds our family, so I made the choice to go help him.” Bassem’s father Riad is an old school bodyman who got started in an industry far different than the one we see today.

The technical work is second nature for him, with 25 years of experience under his belt and 15 running his own shop, but the barriers of language and bu- reaucracy proved a steep challenge. “My dad speaks French very well, but he’s from another generation,” said Bassem.

“He immigrated here from Lebanon with my mom almost 30 years ago now. His reading and writing in French and English is not very good, so he was having trouble handling all the paperwork.”

For Bassem, the automotive world and his upbring- ing go hand-in-hand, though he quickly learned that he has a slightly different set of skills than his father. “I left school and started working with him but working on the production floor wasn’t working for me. So, my dad said to me, ‘You know what, Bas, you should take the courses to become an appraiser.’” Despite the beckoning call of Montréal’s famous nightlife in his ear, Bassem buckled down knowing that he has the means to put his skills to work and get results—and get results, they did.

“After less than a year, we decided to open the second shop, which is my shop. We’ve been running since 2017 and it has been doing very well.” Bassem says that his time serving customers at bars and restaurants gives him an edge in running a bustling bodyshop while keeping up a smile for the customers. 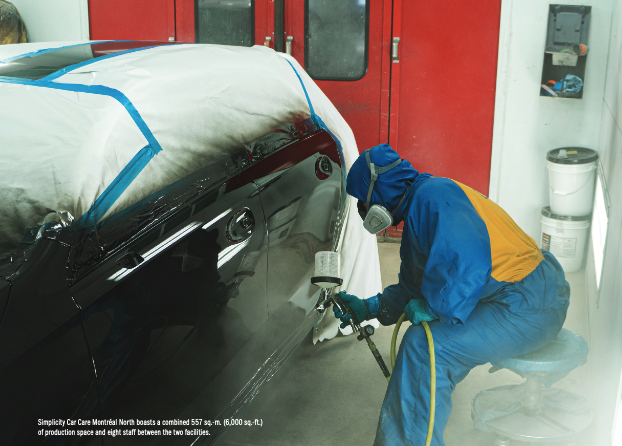 His connections through both his father working in the industry and his school also worked wonders for Bassem in integrating leading-edge equipment and management methods into his shops.

“My shop used to belong to a man named Richard Gallant. He’s a super nice older guy who my dad used to work for back in the 90s. When his wife passed away—she was the one handling the whole office—he thought he couldn’t do it on his own,” Bassem recalled. “So he asked my dad, ‘I want to sell, what do you think?’ I said to my dad, ‘You know what, let’s take it over.’”

And because good things tend to come in pairs, Bassem and his father benefitted from the fact that the building’s landlord was in the middle of renovations at the time of the sale, leaving the pair with a brand new facility to start off in.

Now, with a combined 557 sq.-m. (6,000 sq.- ft.) of production space and eight staff between the two shops, as well as a lucrative partnership with a nationwide collision repair banner, Simplicity Car Care Montréal North was born. “My facility became the main office and my father’s shop is now my second office. Basically, everything passes through my facility; all the estimates and all the paperwork comes through my office and is dispatched in between the two shops,” said Bassem.

Since linking up with the network, Bassem and his shop have managed to secure a slew of OEM and I-CAR certifications, as well as stumbling into a sweet deal with a neighbour- ing shop that saw his team snag a nearly new aluminum welder.

“In my opinion, the Simplicity team is perfectly positioned to help any collision centre structure itself, stay up to date in the constantly evolving industry,and build good relations with insurance companies,” said Bassem.

“There was another shop nearby, that closed down at the beginning of the pandemic. We managed to buy a lot of their equipment; we got it for so cheap and it was almost brand new,” said Bassem.

Bassem recognizes that making these sorts of moves is what separates the profitable shops from those who end up shutting their doors early.

“Eventually every manufacturer will dictate their own procedure, and for every procedure you’re going to need a new machine. Eventually, the small shops that can’t follow the procedure and get the equipment needed are going to have no choice but to shut down. You either go big, or shut down,” said Bassem.

These changes even extend into the customer experience, as Bassem noted that they even refurbished their front office area and set up a coffeemaker and chairs in order to make the entire experience a little more comfortable. In elevating his business, and in turn the quality of his repairs, Bassem sees himself and his shop as representing a face of Montréal North that often goes unseen.

Montréal’s north end has a long history of ethnic and cultural diversity, as home of one of the largest populations of Haitian-Canadi- ans but has often been stained by the effects of discrimination on the part of media and law enforcement.

Bassem sees what he is doing as dispelling the negative and largely unfounded prejudices that his fellow Montréalers have about where he grew up.

“I want to help the people of Montréal North because I grew up here,” said Bassem. “I find a lot of people, specifically in Montreal, thinkMontréalNorthhasabadreputation. There are all sorts of stereotypes associated with the area; I want to be able to set this straight. We have good, well-equipped, competent people at our shop.”

It may at-a-glance appear cliché to chalk up Bassem’s motivations to being purely altruis- tic, as business dealings rarely are, were it not that this sort of thinking directly aligns with his character. 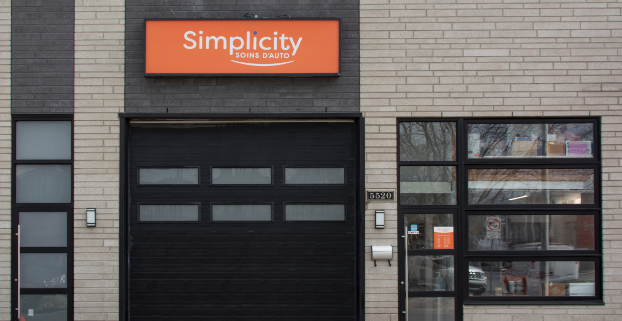 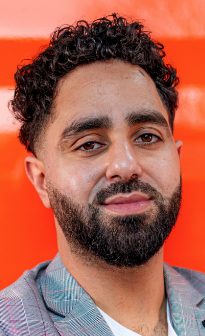 Since linking up with Simplicity Car Care, Bassem and his shop have managed to secure a slew of OEM and I-CAR certifications, as well as stumbling into a sweet deal with a neighbouring shop that saw his team snag a nearly new aluminum welder.