Inside View: Boyd CEO on the Assured Automotive acquisition 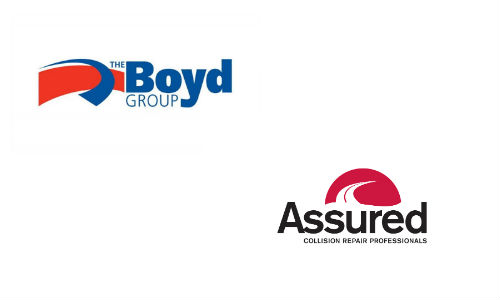 Toronto, Ontario — May 30, 2017 — The Canadian collision repair industry took on a new look yesterday when Winnipeg-based Boyd Group announced a blockbuster deal for Ontario mega-chain Assured Automotive. The deal is a massive one. Boyd announced it will pay $193.6 million for Assured including $146 million in cash and units in the Boyd Group Income Fund.

The deal seems a defining event in the sector. Assured is the largest operator of non-franchised collision repair centres in Canada. Based in Ontario it has a large presence where Boyd until now had little.

“We’ve wanted to expand into Ontario for a while now. We’ve had one location for a few years. But we haven’t have been efficient at growing by single additions in Ontario,” said Brock Bulbuck, CEO of the Boyd Group in an interview with Collision Repair magazine.

Assured operates 68 collision repair centres in Ontario, including 30 intake centres co-located at automotive dealerships. With this acquisition Boyd Group significantly expands its footprint to 110 locations in Canada and 474 locations across North America.

“I was always hoping I could get them to say ‘Yes’. I’ve always hoped that could happen,” says Bulbuck regarding Assured. “When we looked at the landscape they were by far the most advanced in having a very meaningful platform. The management team has shown outstanding performance and growth… Obviously, Assured has a very strong brand. They were the stand out.” The deal finally came about, he says with a laugh, “…when Des (D’Silva, CEO of Assured) stopped saying, ‘No’.”

There had been rumours Assured may expand in eastern Canada. Bulbuck commented on that. “We have a stated goal to double our size by 2020, and that means all of our business units need to double in size. When we’re looking for these platforms we’re looking for growth, the ones that are able to grow…They need to be the champion of growth,” says Bulbuck. “That was Assured. Des and Tony (Canade, Assured’s President) will be responsible for growing east.”

Bulbuck also commented on what effects he thinks this deal will have on the national collision repair landscape. “Probably the most significant change in the Canadian landscape is that this deal brings an emerging national corporate-owned player to a marketplace that has really been, predominantly, franchise-based,” says Bulbuck. “I think that’s the big difference nationally.”

Asked how long he has been talking to Assured, Bulbuck seemed almost nostalgic.

“I’ve known Des the better part of 10 years and Tony almost as long. I can’t recall the first time that we would have approached them to ask them to consider selling their business, but it was certainly over five years ago,” says Bulbuck. “He said ‘No’ many times.”

“We are looking forward to being part of the Boyd Group, both as part of the leadership team, as well as significant unitholders,” said D’Silva. “The combination of our two market-leading companies represents an excellent strategic fit and creates an even stronger industry leader which will be better positioned to grow and to deliver innovative, best-in-class service to insurance clients and vehicle owners across North America.”

“The acquisition of Assured is a significant strategic move for Boyd that further positions us as a leading provider of collision repair centres in Canada, and North America,” said Bulbuck. “Assured, with its strong management team, well-established culture of operational excellence, strong sales growth and commitment to high quality customer service, is complementary to our existing business and enhances our ability to deliver value to our customers and insurance clients, and, in turn, our unitholders.”

The transaction is expected to be completed within 60 days, subject to conditions. The purchase price of $193.6 million will be paid with $146.1 million in cash and $47.5 million in Boyd Group Income Fund units priced at $88.31 per unit.

On May 26 Boyd increased an existing credit line to US$300 million offered through a syndicate of Canadian and U.S. banks. The line will be drawn on to fund the cash portion of the purchase price.

“It is important to note that Assured, like Boyd, has pursued an aggressive growth strategy, having added 35 locations, including 17 intake centres, since 2011,” added Bulbuck. “We expect to combine their leading market position and footprint in Ontario with our resources and acquisition expertise to build new avenues for growth in Canada and the U.S.”