Back in 2019, a carrier cargo ship called MV Golden Ray capsized while carrying 4,200 Hyundai vehicles, and due to a string of setbacks, those vehicles are still trapped today. While there were no casualties, the ship, which is 106 ft wide and has a capacity of 20,995 deadweight tons, is a hard project to dismantle. Preparations were made to go to the site of the ship and start to carefully scrape it for parts. This however, was put on pause due to COVID-19.

The group that oversaw dismantling the ship had 10 responders test positive for COVID-19, which then required the other 50 responders to quarantine. The other problem the group ran into was as hurricane season approached, further setbacks quickly arose, and the project was put on hold most likely until October. In terms of the dismantling process, the team will use a VB-10,000 twin-hull heavy-lift vessel, which will then use two 69-metre tall gantry cranes to cut the ship into eight large sections that will then be lifted onto a barge and transported to a recycling facility in Louisiana.

Jeep drivers have an unspoken bond, anyone who drives one knows to wave to fellow jeep drivers when they cross paths. However, this bond has been further strengthened with a new trend called ‘Jeep Ducking,’ and it all started in the great white north. Jeep owners are purchasing rubber ducks, writing a little note on them and leaving them on other Jeeps as a way to spread goodwill and positivity. As quirky and fun as this trend is, it has a rather heartbreaking origin. Self-proclaimed creator Allison Parliament, 31, said she started ducking in July after she was physically assaulted in Ontario, for having an American license plate, according to the Taunton Daily Gazette. Parliament works in both Alabama and her birth country of Canada, splitting her time between both countries. She explained that she was driving her car, which has Alabama license plates when she was approached by a man who pushed her into her vehicle and told her to go back to the U.S. Instead of getting angry, Parliament and her friends decided to react to the situation with positivity. She went to a nearby store, purchased a rubber duck and placed it on a Jeep with a note explaining its purpose. After that, Parliament and her friends took to Facebook and the trend blew up. There is now a private group on Facebook, called Official Ducking Jeeps with over 14 thousand members from all over the U.S. and Canada. As well, an Instagram account that features people who have participated in the ducking challenge.

A Hyundai dealer in Brazil has become famous all over the world after they adopted a stray dog and brought him into the dealership as a canine car consultant. The manager of Prime Hyundai, Emerson Mariano, found the dog and started feeding him, giving him water and providing him shelter. The dog stuck around, and the staff became fond of him.

The manager then adopted him permanently. The dog has been named Tucson after Hyundai’s small crossover. Tucson is about a year old and since being adopted has been taken to the vet for all his necessary shots. He now owns many accessories as part of the Prime Hyundai family, such as tires, a tuxedo and his own employee badge. He likes to spend his days at the dealership in his very own doghouse. 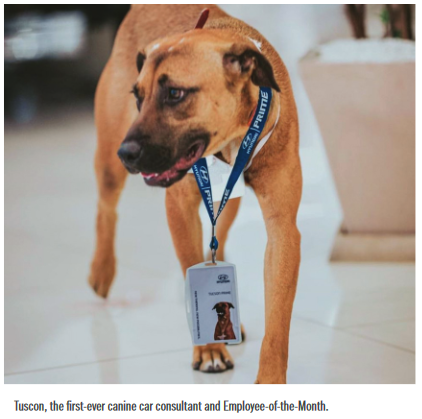 A Tennessee woman recently received a shock when she received her drivers licence back from the DMV as it appeared that she had become invisible. Jane Dodd chose to renew her license online but after it came in the mail she was confused as the picture on the licence was not of her but instead an empty chair.

The Tennessee Department of Safety and Homeland Security says the photo was taken accidentally and had come to end up on Dodd’s licence as it was the last photo taken in her file. Luckly, Dodd’s was not upset about the incident and even said it gave her a few laughs. Dodd’s posted the photo to facebook and it has been shared more than 19,000 times and several memes have also surfaced. Dodd’s received her new license—and this time, she is visible.

ALONG FOR THE RIDE

The Dog Sack invention started to appear in 1935 making its debut in the June 1935 issue of popular mechanics. The idea behind the invention was to keep the car clean while allowing the dog some fresh air.The original article says: “When you take your dog along for a ride but prefer to not have them inside the car, they can ride safely and comfortably in this sack, which is carried on the running board.

The bottom of the sack is clamped to the running board and the top is fastened to the lower part of an open window with hooks, covered with samm rubber tubing to prevent marking the car.” Thankfully, this invention was never added to any car models. 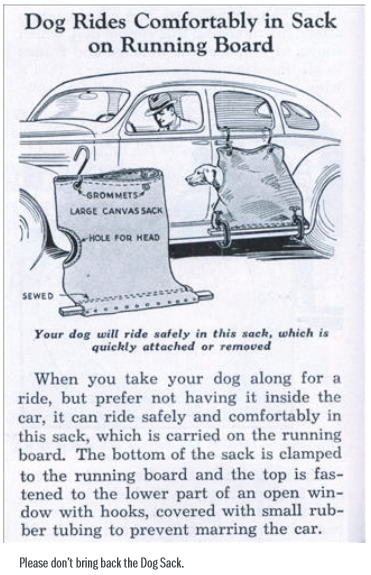 A Canadian driver was been caught sleeping while autopilot drove the car at 150 km/h in September. The incident was reported both on Twitter by the Alberta Royal Canadian Mounted Police (RCMP) and on national news. “The officer was able to obtain radar readings on the vehicle, confirming that it had automatically accelerated up to exactly 150 km/h,” the RCMP said in a statement. The RCMP took the matter very seriously and charged the driver with speeding. They also issued a 24-hour license suspension.